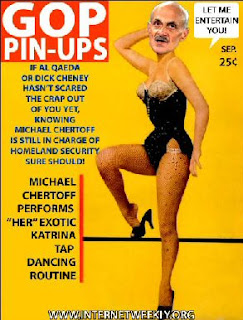 (I know this is disturbing, even by my lax standards – sorry…).

Via McClatchy, I have an update to this post from March that told of how Jeffrey Taylor, the U.S. Attorney for the District of Columbia, filed charges against Chiquita Brands after the company admitted paying protection money to a Colombian paramilitary group that happened to be on our government’s terrorist organization watch list. The Department of Justice is now conducting a criminal probe into the matter.

As noted here (from yesterday - registration may be required)…

(Chiquita board member) Roderick M. Hills, who had sought the meeting with former law firm colleague Michael Chertoff, explained that … he knew that such payments were illegal, according to sources and court records, but said that he needed Chertoff's advice.

Chiquita, Hills said, would have to pull out of the country if it could not continue to pay the violent right-wing group to secure its Colombian banana plantations. Chertoff, then assistant attorney general and now secretary of homeland security, affirmed that the payments were illegal but said to wait for more feedback, according to five sources familiar with the meeting.

Justice officials have acknowledged in court papers that an official at the meeting said they understood Chiquita's situation was "complicated," and three of the sources identified that official as Chertoff. They said he promised to get back to the company after conferring with national security advisers and the State Department about the larger ramifications for U.S. interests if the corporate giant pulled out overnight.

Sources close to Chiquita say that Chertoff never did get back to the company or its lawyers. Neither did Larry D. Thompson, the deputy attorney general, whom Chiquita officials sought out after Chertoff left his job for a federal judgeship in June 2003. And Chiquita kept making payments for nearly another year.

Chiquita's executives left the meeting convinced that the government had not clearly demanded that the payments stop. Federal prosecutors, however, are now weighing whether to charge Hills; Robert Olson, who was then Chiquita's general counsel; former Chiquita CEO Cyrus Friedheim; and other former company officials for approving the illegal payments, according to records and sources close to the probe.

It sounds as if Chiquita was trying to do the right thing; sure, they were doing business with thugs, but our government wasn’t telling them to pull up shop and get out (and as I noted in March, all of the multinationals in that hemisphere have an eye towards Venezuela, especially Coca-Cola).

Also, I probably was a little kinder than I should have been to Chiquita in March when it comes to the allegations of fighting attempts to unionize workers and harassing those workers who are union members, but we’re not talking about that at the moment.

What we are talking about is another episode of Mike (“City Of Louisiana”) Chertoff dropping the ball on behalf of a friend, as well as the goof by Larry D. Thompson; I guess Chertoff thought the problem would just go away when he left the assistant attorney general post he held at the time of the Hills meeting for a federal judgeship.

We’re also talking about another ideological collision of sorts between Bushco’s beloved global market economy and its terra, terra, terra bombast, and we know who wins that showdown every time.
Posted by doomsy at 12:16 PM