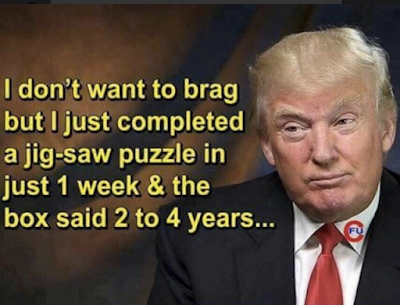 I think it genuinely requires talent to weave comedy gold from the utter idiocy inflicted on us by the Gropenfuhrer, as Seth Meyers manages to do once more in this clip…

…and it’s been a year since the gun carnage at Marjorie Stoneman Douglas High School (more here, here, and here...and I'm sorry, but despite what Kyle says in the clip, there's no place for an AR-15 in civilian use as far as I'm concerned)…

…and Brooke Thomas, Mark Thompson and Ben Mankiewicz talk about the latest Repug idiot attacking the LGBTQ community, Eric Porterfield of West Virginia by name (now watch him get re-elected, the next time he runs…love to be wrong)…

…and I thought this was a good commentary from WaPo reporter Eugene Scott about the dustup over the entirely true remarks from Dem U.S. House Rep Ilhan Omar about Israel’s occupation of the West Bank, with, predictably, politicians from both parties tripping over themselves to placate our aggrieved “ally” (here, and this, when it comes to The Big Orange Cheetoh, is merely to laugh…and when it comes to McCarthy, let’s not forget this – and kudos to Omar for this also…the next few clips are tied a bit to the issue of censorship)…

…and I now give you the latest installment of “This Day In Doomsy History” (more or less) from 2/11/14, with Rod Serling talking with Mike Wallace many moons ago about censorship concerning, among other things, the portrayal of Lassie giving birth on TV…never a shortage when it comes to “values voter” outrage in this country (I originally noted that this clip came from Anthony Cumia on Youtube, and at the time I neglected to realize that he was one half of the radio-comedy team “Opie and Anthony,” who were once fired because they broadcast a comedian describing a couple having simulated sex in a vestibule of St. Patrick’s Cathedral while Mass was going on…yes, maybe a case of “’values’ for me but not for thee,” but as a Roman Catholic, I definitely think that went way too far)…

…and speaking of faith, on this day in history (well, yesterday actually), the astronomer and mathematician Galileo Galilei faced charges of heresy from the Catholic Church for advocating Copernican theory, namely, that the earth revolves around the sun as opposed to the other way around; he was put under arrest by Pope Urban VIII in 1633 and was sentenced to live out the rest of his life in his villa near Florence where he died in 1642 (the Church made an official “oops, our bad” announcement about it in 1992…and I’ll bet you didn’t think there was a song for all of this…well…)…

…and given the significance of this day on the calendar, I thought I’d present this (I’m pretty sure the Utopia tune was “Love In Action”)…

…and for the opposing point of view, I give you this :-).

Posted by doomsy at 8:11 AM No comments: 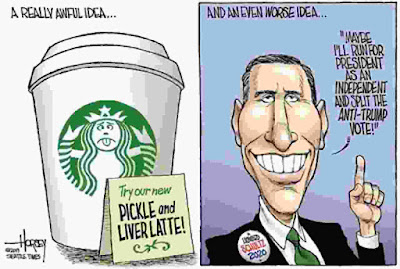 I thought this was a particularly good “New Rule” from Bill Maher about “both sides” in response to Howard Schultz and his vanity campaign for prez (hey, Starbucks guy, you want to help for real? Try supporting a rock-solid Dem national and local party infrastructure with donations. But of course, that won’t get you any headlines, you self-aggrandizing tool…and speaking of self-aggrandizing tools, why the hell does Maher continue to let wingnut nematode Jack Kingston onto his show??!!)…

…and gosh almighty, THEY FORGOT TO MENTION MEEEE!!! (sniff - just for fun)…

…and I don’t know if these guys will be touring to our area soon, but I’ll be checking for sure.