Gabby Giffords was shot five years ago today, and Federal Judge John Roll and Christina-Taylor Green were murdered, along with 4 others, as noted here, among many other victims.

And as noted here, it's not as if the wingnuts hadn't been mad at Giffords prior to all of this horror unfolding (and yet again, with all due respect to Giffords - I don't care about Chuck Toddler and his corporate media mannequin - where is the Democratic equivalent to this?)...

...and I think it’s appropriate to revisit a typically fine Special Comment from K.O. on the subject…

…and I think Lip TV asks a good question here; namely, are armed white men more of a threat than terrorists, particularly given the stuff going on in Oregon (I hope Steve Moore is right at the end – we’ll see)…

...and this is a recap of the gun control measures proposed by Number 44 (opposed by all Republicans as far as I know, including this asshat)...

...and this tells us about the gun violence restraining order legislation enacted in California, stemming from the truly scary case of Elliot Rodger (easy to dismiss Rodger as a spoiled brat without looking below the surface, I realize – and as far as I’m concerned, Sam Paredes and his ilk can go right to hell; always throwing cold water on ANYTHING to keep guns out of the hands of lunatics)…

...and Thom Hartmann tells us about Missouri relaxing its gun control laws, and the inevitable follows (and yes, you guessed it - there's a theme to these videos)...

...and good for Trevor Noah here in a recap of Obama's actions on guns this week - terrific and totally justified smackdown at the end (sorry I couldn't fix the autoplay issue)...

...meanwhile, Wayne LaPierre of the NRA argues here for universal background checks - oh, by the way, he did so in 1999, as opposed to now... 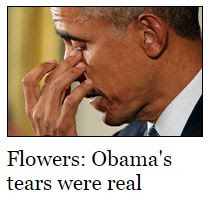 ...and of course, leave it to philly.com conservative quota hire columnist Christine Flowers to make it sound like the alleged legitimacy of Obama's tears is actually a "thing"...

…and sorry to disappoint, but I’m actually not going to conclude this with an anti-gun song, but instead will only note the recent passing of famed music producer Robert Stigwood; he will quite rightly be remembered as the guy who helped the Bee Gees resurrect their careers and rocket to proverbial super-stardom, but as far as I’m concerned, he’s the guy who hastened the breakup of Cream by making them tour almost to the point of exhaustion (though he did produce Clapton later...go figure) – this is the final tune from their final album.

Posted by doomsy at 1:30 PM No comments:

Just because that supposedly liberal MSNBC network rescheduled Rev. Al to ratings no man’s land on Sunday morning, that doesn’t mean that he no longer has anything worthwhile to say – far from it…

…and I’ll be honest; I know humor is highly subjective, but I never thought Jerry Lewis was particularly funny, and I NEVER got the whole French thing about how they thought he was some kind of a comic god or something – yes, absolutely give him props for all of the dough he raised to fight Muscular Dystrophy, but as far as I’m concerned, that’s it…

…and I give you John Oliver, someone who to my mind is legitimately funny, with a word or two on New Year’s resolutions…

…and here is a band I never get tired of.

I think Rachel Maddow brings us an interesting report here on some of the campaign tactics shared by “The Donald” and George Wallace, but let’s not forget how well she starts this with the clip about LBJ and guns (the interview was with historian Michael Beschloss, by the way)…

…and this is a shocking bit of sanity from Falafel Man on the issue of guns, though why he chooses to close his remarks by saying “think about it, Mr. President” is something I cannot possibly imagine – oh, riiiight…Billo has to find a way to blame that Kenyan Muslim socialist somehow…

…and oh yeah, speaking of Bill Orally, Cenk tells us “a tale of two BLMs” (NSFW)…

I don’t know if this will turn out to be Number 44’s finest hour or not, but I have to tell you that it’s right up there (h/t Balloon Juice; more here – and of course, here is the predictable wingnut response; a voice of sanity on this is here, a person who has a perspective on this that I hope no one else is ever forced to acquire)…

...and Thom Hartmann gives us a history lesson on The Sainted Ronnie R and the beginnings of “austerity” (and actually, going back even further than that to Tricky Dick)…

...and John and Cenk tell us about Trump supporters and "Trump shame" (I'd be embarrassed too...have the guts to be honest, OK? This is actually kind of scary - this election concerns me a bit like the '00 election did - love to be wrong of course)...

…and for the occasion of President Obama’s announcement today, I tried to find an anti-gun song that I haven’t used already…at least, I don’t think I’ve used this before (Jeff “Skunk” Baxter plays the dobro I believe).

I give you the following from here...


If 100 Muslims banded together in a group with an open disdain for government, protested against the government and openly professed their willingness to kill federal officials and/or die if need be in opposition to the United States government – would they not be considered terrorists? What's the difference between a terrorist believing it's acceptable to kill Americans and right-wing militia members believing the exact same thing? Because when these militia idiots say they're willing to use force, they are quite literally saying they're prepared to kill Americans.

I've never quite understood how it's "patriotic" or "American" to believe you have the right to "rise up against" the government that was created by the United States Constitution. A government that's elected by the people.

Oh, and let's not forget this too (however, I should note that I don't agree with this assessment - MOVE was a very different circumstance that had gone on for years, and puh-leeze spare me Ramona Africa and her sob story)...

...also, I don’t totally buy Philip Howard’s assessment when It comes to what he would call “excessive” environmental review (and I think an interesting counterpoint is here), but he does make a good point I believe when it comes to what it would take for the “party of Lincoln” to actually cooperate with Democrats on the vital issue of repairing and rebuilding our infrastructure…

...and this doesn’t have anything to do with politics as far as I know, but I’m sorry – I have to add it anyway (actually, I’m not sorry; love the line at the end)…

...and why do I have a feeling that, if the Black Keys and Little Feat somehow combined, they would sound like this?

Posted by doomsy at 7:13 PM No comments: