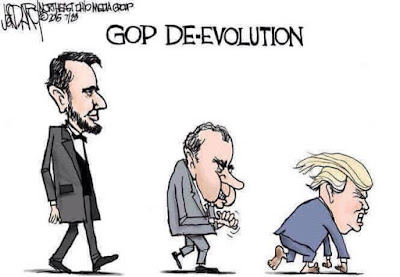 Rachel Maddow tells us, along with Matt Zapotosky of the WaPo, about at least one intriguing staffer hired by Special Counsel Robert Mueller, along with the fact that the spotlight on Jared Kushner is getting bigger (Money laundering? Fraud? Other potential financial crimes? So much winning!)…

(Oh, and is it my imagination, but does Ivana Trump have some kind of a ‘60s Fellini-model thing going on with those shades? Just wondering…)…

…and with the first son-in-law in mind, I bring you the following from Bill Maher (NSFW - GREAT finish!)…

…and I guess the lesson here is that, if you’re pregnant in this country or know someone who is, live anywhere else except Texas (I’d like to tell them what they can do with that yellow rose)…

The maternal mortality rate in Texas is higher than anywhere else in the developed world pic.twitter.com/TFfCnKwXNj


…and apparently based on this (probably as a distraction from the Russia stuff as opposed to just about any other reason), it looks like our AG, “Immunity Gnome” Jeff Sessions, is trying to declare “war on weed,” which I’m sure will eventually end up making the drug more plentiful somehow (that’s the way it usually goes)…


...and here’s an interesting bit of science I came across on plastic-eating worms who could save us all (CNN's Kristie Lu Stout talks to beekeeper/scientist Federica Bertocchini)……

…and apparently, PA’s own mistake of a U.S. House Rep Lou Barletta is all sooo scared to have a town hall now (here)…didn’t feel that way in 2010 when the Teahadists were all in people’s faces – oh, but that’s because they were carrying the proverbial water for Barletta and his party…I think this reminder from a few years ago should be provided as a response…

…and Lawrence O’Donnell did a good job here IMHO of putting together the recent mass shootings in this country (and yes, there were 2, let’s not forget, instead of just the one in Alexandria, VA which was horrific enough) – oh, and by the way… 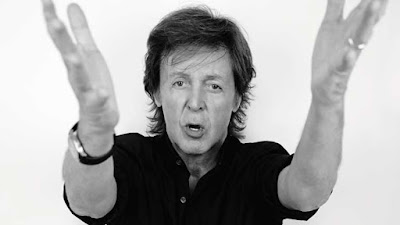 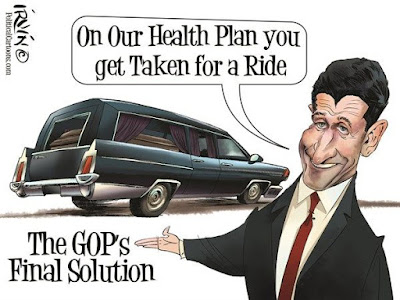 Kudos to Sen. Chris Murphy for calling BS on the Repugs and “Trump-Scam-Care”…

Republicans are trying to strip 23 million people of their health insurance — and this senator is calling them out over it pic.twitter.com/lDHLAzyhq3


…and with that in mind, it’s time once more for “This Day In Doomsy History” from 6/16/11 (Dem U.S. House Rep Gerry Connolly of Virginia called out the Repugs’ efforts here regarding censorship on the part of Mr.-Puppy-Dog-Eyes-With-The-Shiv by changing the language around Ryan’s attempt to voucherize Medicare – shows the progression as far as I’m concerned in the congressional Repugs’ efforts to stifle dissent and strangle the free flow of information on issues that are important to us “bigly” - more here)…

…and Bernie Sanders speaks out against that cowardly life form who shot up the Alexandria, VA baseball field and those in attendance; I agree that he didn’t have to even though this individual worked on his campaign to some degree, but it was still the right thing to do – and I have to admit that I’m saddened by what Joy Reid has done on this…NSFW towards the end from John; to me, one takeaway here is that we on the Deb/lib/progressive side can’t be hunkered down into one “camp” at the expense of another – yes, as I’ve said before, I supported Bernie in the primary but I supported Hillary in the general because she was the nominee of my party and the choice was her versus a crazy person…I think Bernie was a bit excessive at times in his campaign and HRC definitely was in hers, but as somebody once said, politics ain’t beanbag, and at the end of the day, you need to know what you’re about and stick with it (and yeah, the next time a wingnut blames a lefty for gun violence again, tell them to suck on this and this)…

…and leave it to Sam Bee to give us the lowdown on the Jeff Sessions Show (yeah, I think “Senator Honor And Virtue” needs to go reserve his place in the Shady Rest One-Way Home For Political Blowhards...NSFW also)…

...and all of this makes me nostalgic, I must admit, for a chief executive so utterly competent at his job that the wingnutosphere had to MAKE UP scandals about him, as David Pakman reminds us on how Obama was criticized for mustard on hamburgers eight years ago (horrors! – yep, “context” indeed)…

…and with all of the insanity going on, I just felt like I needed to hear this song.

Posted by doomsy at 3:26 PM No comments: 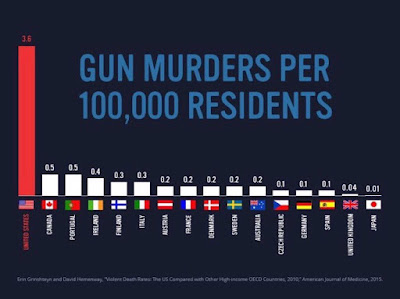 (Might be hard to read I know, but the furthest left column in red – apropos – is the US. The graph shows that we have about 3.6 gun deaths per 100,000 residents, which, far and away, leads other countries.)

Yeah, let’s have the predictable wingnut demonizing of Democrats/progressives/liberals over the act of this one lunatic who also happened to be a Bernie Sanders supporter (here and here). Never mind that a sizeable amount of mass shootings happen at the hands of sick, twisted individuals who tend to associate with right-wing causes (to say nothing of the fact that, as far as I’m concerned, anyone who demonized Planned Parenthood over what turned out to be faked videos of the groups supposedly selling baby body parts has blood on their metaphorical, or perhaps actual, hands).

Oh, and by the way, there was also a shooting in San Francisco (here). Both attacks are cowardly and awful, and we should pray if we’re so inclined or lend whatever support we can to help in either case.

But I’d like to perhaps tilt at a figurative windmill once more and ask that, people, please, for the love of God almighty, can we tone down the eliminationist rhetoric and gun-related nonsense?

You know – stuff like this (gosh, wasn’t Rand “Ophthalmologist Certified By My Own Board” Paul so clever in this clip, shooting the IRS Tax Code – and by the way, when it comes to “Aqua Buddha” Paul, let it be known that he was one of two U.S. Senators…the other being the thoroughly execrable Mike Lee…who opposed sanctions against Russia for their interference in our election last year, as noted here - typical for Paul based on this)…

…and by the way, when it comes to private individuals selling guns in Virginia, David Frum is right here, but not when talking about licensed gun dealers, as noted here, and I believe Frum made the correction (demonstrating yet again the utter insanity of what passes for gun laws in this country…and I don’t know if irony is the right word for this.)

Update 6/15/17: And as far as people like Greg Gutfeld and Chris Collins are concerned, I’m still waiting for “lefty” equivalents to infamous moments like these (God, I wish enough people had listened to Cenk)…

…and Chris Hayes talks to Obama Admin lawyer Bob Bauer and Elizabeth Holtzman, who served on the House Judiciary Committee during the Watergate hearings, both roundly ridiculing Jeff “Elf On A Shelf” Sessions for his evasions in his Senate testimony yesterday…

...and here is a very important reminder (more here)...

‘If the GOP & Trump have their way many people will lose their homes, their jobs, or their lives.’ pic.twitter.com/i578OarEof


..and I know it’s just about over in these parts, but still, Happy Flag Day, everybody. 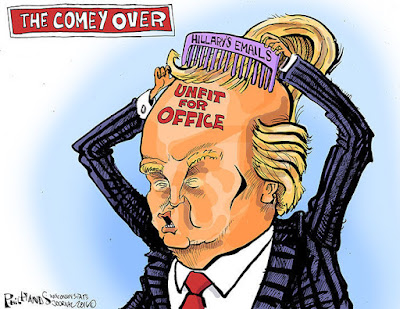 I know that yesterday marked the 30th anniversary of The Sainted Ronnie R giving a speech telling Soviet General Secretary Gorbachev to “tear down this wall” and then that marked the fall of communism once and for all and capitalism reigned supreme and everyone lived happily ever after the end.

Well, not really – the truth is somewhat more complicated, as it often is; the prevailing theme for me is that everyone stood up and said enough is enough, and the world as a whole was better off…

…and returning to the present – or should I say “predisent” – day, I give you the latest from our Megalomaniac-In-Chief (and it sounds like something is up with the Russian hookers; hmmmm - wonder how the saps who got played by our Problem-Child-In-Chief here feel about that?)…

…and yeah, if it doesn’t involve someone of a different ethnicity, gender preference or faith background, then I guess it isn’t “terrorism,” huh? (NSFW)…

…and here’s yet another reminder that Congressional Republicans plan to utterly f*ck us over when it comes to Trump-scam-care (and kudos as always to Sen. Elizabeth Warren, and I laugh at that fool Jimmy Dore for criticizing Warren for supposedly not supporting Bernie Sanders or allegedly supporting Wall Street, or something)…

Posted by doomsy at 2:09 PM No comments: 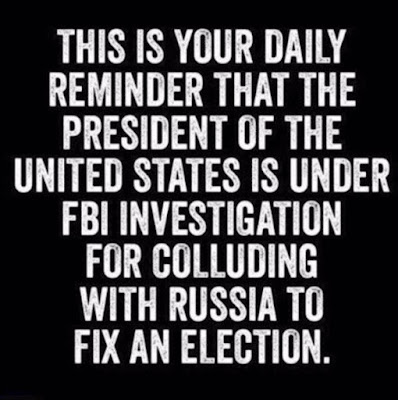 Apparently, this was pretty close for what passed for Generalissimo Trump's meeting today based on this story (and really, people, are we actually still surprised at this point?)…

…and I think this was some recent insightful commentary on the “Gropenfuhrer” from Tweety, though why it has taken so long for him to realize this is something I cannot imagine…

…and I normally wouldn’t give that senile fossil Pat Robertson the time of day, but I thought Kyle made a good point about how, when it comes to arming the Saudis, you hear crickets from the wingnutosphere, and THAT has A LOT to do with funding extremism, as Kyle points out (NSFW)…

...and with the prior clip in mind, I should note that I would never claim to imagine what He thinks of us all, though I'm sure, based on what the Bible says, the first ones who will "get it" are those who claim to speak in His name, like these clowns...


…and this story tells us about four Orlando moms who, tragically, lost their kids in the Pulse nightclub massacre in Orlando, FL, the worst mass shooting in this country’s history, which took place a year ago today, though, to their everlasting credit, they did manage to create something positive and enduring out of it (and by the way)……

…and yeah, when summer hits in this area, it’s kind of like a door slamming open and the heat and humidity descend immediately – hey, I’ll take this as opposed to ice and snow.