Man, does Chris Hayes light it up here, though, as karoli properly notes, Hayes should direct some of his ire towards Joe Scar too on his own network (which, of course, means that he can't)...

...and Lawrence O'Donnell pays tribute to outgoing Dem Senator Jay Rockefeller on the whole torture matter (and I can't believe how well Sen. Lindsey Graham has acted during this whole fiasco – credit to him for a change)...

...and speaking of lighting it up, we had an experience tonight with “one light goes out, they all go out” - all is now OK, though...

...and I don't think I've ever featured this before – not sure why not (I think one of these guys died)...

...though I think The King says it best here...

...and if you choose to imbibe tonight, please stay indoors – hugs.

Ho, ho, ho – BLAM! (and let’s hope nobody gets hurt of course, or worse, here – and in a related story...and in ANOTHER related story - dear God)…

…and yeah, one person’s terrorist is another person’s “freedom fighter” (and I think Cenk makes a great point about the Fix Noise priest who supports drones…strange talk for a professed man of God)...

…and I know we observed the Pearl Harbor anniversary earlier this week, but I missed this one; Lawrence O’Donnell tells us the story of Jeanette Rankin, the first woman to serve in Congress, and her “No” vote in response to the Japanese attack…

...but even though events might not warrant it, let's try to end with a smile, OK?

(Sorry, but there’s a lot of verbiage to lead off this clip – the more I watched it, the more pissed off I got.)

Want to know why the Dems got creamed in the last election? I submit that part of the reason is because of the unbelievable disconnect between the White House and progressive U.S. House Democrats as evidenced in this clip (yeah, the Repugs are being typical greed heads, but I don’t think that’s news at this point…give voters a choice between Republicans and Republican-lites, and Republicans will get the vote every time, even though we’re going to be continually punished for the result…I have to admit, though, that Alex Wagner asks a really stupid question at about 5:30 and follows up just as stupidly at about 7:00, and why the #@!$ are they featuring Chuck Todd(ler)? – yeah, MSNBC sure is “liberal,” isn’t it…nice to hear Chris Van Hollen complain about the pages in the bill after listening to the Repugs carry on about the size of the health care bill that of course became law…Howard Fineman makes some good points, but I take issue with the entire framing of this clip; I think the U.S. House Dems are the only responsible adults here, and I don’t know how or why they should be held to account if there is a shut down – oh, and let Joshua Green do some framing too against the backdrop of the mid-terms, when in reality, if the Dems – as usual – had the courage of their convictions and stood with Number 44, I honestly don’t believe it would have been quite the rout that it was…not giving Obama a pass for caving and signing off on this garbage, though – one more thing; Wagner goes completely off the rails with her comment about the Teahadists at about 13:00; they came to fruition to oppose Obama and rebrand after Dubya – they don’t have a “populist” molecule in their metaphorical bodies)…

Oh, and by the way, the damn thing passed the House with the help of 57 “Democrats” here (a Senate vote will take place over the next day or so).

And who the hell decided to call this mess the “Cromnibus,” by the way? It sounds like one of the last emperors of Rome before it was overrun by the Huns...

…switching to a whole other topic, I think there have been times when Time Magazine really blew it with its Person of the Year selection, but I think they really nailed it in the best way possible this year…

...turning to the seasonal stuff, I give you a truly original "big man" (and born in Philly too)...

...though if you prefer something more mellow, I give you this.

What follows is part of Rachel Maddow's report last night on the torture findings...

...and here is more (and regarding the question of how the f@ck could this happen, here is part of the answer - IOKIYAR)...

...and I think Jon Stewart does the best he can with all of this horrific stuff here (yeah, I think Mr. Creosote nailed it)…


…and it’s pretty bad when you need to look to Chuck and Dave Koch for something not as terrible as the prior story (but as I said, still pretty bad)…

...and I don't know about you, but I need to hear some seasonal tunes after all this stuff - kind of a palate cleanser...

Posted by doomsy at 7:53 PM No comments: 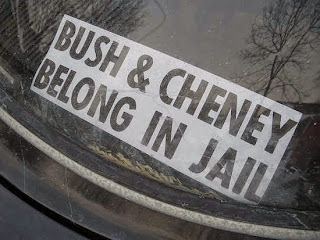 Torture is a war crime. Those who engage in it and authorize it should be prosecuted. Period - full stop...

…and Thom Hartmann asks a really hard question, with what I think is an even harder answer (here)…

…and yeah, isn’t it just too precious that A COMEDIAN (and quite an accomplished filmmaker also, apparently) is held to a higher standard of proof than the media wing of the Republican Party, which ostensibly passes itself off as a news organization (here)?


...and turning to the seasonal stuff, I give you this...

...and I give you the latest installment of FAIR TV (yep, "Fox being Fox" all right)...

…and because it is 12/8, after all, I think it’s time to recall the 34th anniversary, believe it or not.