…and good for the kid in this story for not pointing out what an utter dumbass Ben Carson is, though I’d have something to say to this idiot if I were the father, I have to admit (Jimmy Dore makes this NSFW)…

...and this one was covered a whole bunch of times, but he made the original...

...and I didn't like the videos with the "Future Legend" intro segment, so I'm just presenting the final tune/video by itself.

RIP Alan Rickman – of all of the roles he played, maybe my favorite was that of Colonel Brandon in “Sense and Sensibility” (yeah, I know, Mr. Artsy Sensitive Type…great acting by communicating exactly what is going on with his character without saying a word) – I’m sure he’ll get well-deserved props for, among other things, helping to kick-start the whole “Die Hard” franchise with his terrific portrayal of villain Hans Gruber…also once shone playing “mad Monk” Rasputin in an HBO movie awhile back…

…and no, I won’t shed any tears either for a publication that was once called "Joe Lieberman Weekly"…

...and Thom Hartmann brings us econ & labor news for 1/4, a little behind again I know (boy, is he ever right about cleaning out the financial swamp of our political campaigns – might be a good idea to avoid Capital One, and it’s ALWAYS a good idea to avoid for-profit colleges…good for the University of California, though, for divesting from for-profit prisons; God forbid something in this country doesn't make money)…

...and this to me is so funny that I don't think any further explanation or embellishment is required...

…and as we wind down this week’s tribute to David Bowie, let’s not forget about some of his collaborations with a whole host of performers, including Freddie Mercury, Mick Jagger, Annie Lennox, and this guy…

…as well as his contributions to movies, including The Hunger (no, not the Hunger Games), The Man Who Fell To Earth, and Merry Christmas, Mr. Lawrence (offbeat to be sure, in keeping with his persona - more here) - with his passing, the appreciation of his legacy on both music and popular culture overall will only grow greater over time.

…and to me, the real takeaway here is in the last minute when Washington state Gov. Jay Inslee talks about taking a public health approach to gun safety (follow up to the State of the Union address, the final one from Number 44 – sigh)…

...and for anyone who thinks renewable energy is going away, think again (here and here)...

…and I didn’t catch the name of the person in this video, but she’s absolutely right because of this – oh, and by the way, speaking of class action lawsuits, the Repugs in Congress (or their campaign contributors, more precisely) have dreamed up this latest scam…

Update 1/26/16: And the preceding video brings this to mind as far as I'm concerned.

…and returning to Bowie, he always gave credit to Mick Ronson for helping to come up with that whole Ziggy Stardust-era sound; once heard a funny interview where Bowie talked about how Ronson didn’t want to do the whole androgynous thing (he being a studly guy from Hull and all that), but he embraced it with no problem once he realized how the groupies responded to him for it…

…and let’s not forget that Bowie made sure that we found out about this guy too. 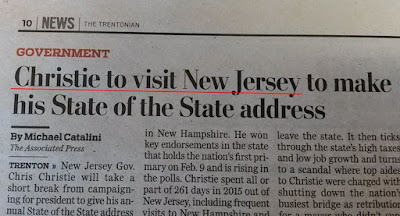 I thought this was an absolutely hilarious headline that appeared in Monday's issue of The Trentonian; Governor Bully recently delivered his "State of the State" Address, you see (more here...ya' think the Guv might actually decide to stay awhile?).

On another note, on the subject of Guantanamo, either charge the detainees and transfer them to a Supermax prison in this country (not like we have a shortage) or release them and close the damn thing…

Update: God, am I sorry to hear about this – AJAM deserves a lot of credit for courageous reporting of stories that matter as far as I’m concerned, but in today’s high-dollar media age, they had to make a big splash in this country and get dollar-paying subscribers in a hurry to become a “player,” and I’m sure this didn’t help…if they screwed the proverbial pooch, then they should owe up to it, but again, I don’t see ANY of the news networks with initials for names doing their type and quality of reporting.

…and I’m glad to see Seth Meyers give those Oregon militia idiots the treatment they deserve, including Mr.-Hiding-Under-The-Blue-Tarp Guy (and Little Ricky continues to be an utter embarrassment…more on the whole sentencing thing is here, and I think the student here deserves a lot of credit)…

…and even though it’s a new year, that doesn’t mean that I’ve done away with “This Day In Doomsy History” – I think this clip from 1/12/10 is a bit of a cautionary tale about the Teahadists; despite the fact that the political landscape is different now in some ways, it is still much the same as far as I’m concerned in other ways, at least in terms of the battle to keep the other side from getting the momentum because the consequences could be beyond disastrous if that happens… I thought Mark Leibovich's point was interesting about how both the energizing AND shrinking of the Repugs and their beloved "base" was taking place...this country ended up giving the Teahadists what they wanted in the fall elections that year; let's not make that mistake again…

…and I thought Cenk and Ana had some interesting remembrances on Bowie here, particularly his face off with Mark Goodman of MTV in 1982 over the lack of black artists on that network at that time…

…and speaking of “the thin white duke,” here is a cut from his ’74 performance at the Tower Theater in Philadelphia…

Yep, if you’re watching the Sunday morning gab fests, then you’re probably a Republican (and probably NOT reading this, I’m sure)…

..and Dem U.S. Congresswoman Karen Bass talks about what she thinks Obama will talk about on guns during the SOTU (she's absolutely right at the very end)...

...by the way, I'm probably going to be featuring Bowie stuff all week; hope you like it..."it's not the side effects of the cocaine, I'm thinking that it must be love" - I absolutely wore out my copy of this recording years and years ago...

...and here is Bowie singing "Arnold Layne" by Pink Floyd, with David Gilmour and Richard Wright.

I don’t think either one of these “money guys” from the Murdoch Street Journal are necessarily political; I think they’re just sticking to their fields of expertise here when it comes to forecasting what we could be looking at economically in 2016 – I still thought this was an interesting segment…

…and sticking with the economy, I thought this was a good segment on how the GOP presidential candidates pretend to care about poverty; this is actually an abbreviation of a longer clip at MSNBC’s wretched web site… 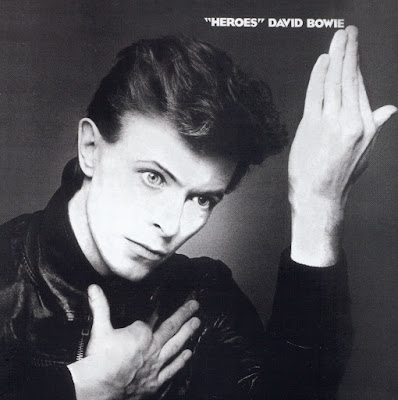 …and RIP David Bowie – still in utter shock like just about everyone else I guess; in keeping with the example of George Harrison, Warren Zevon and probably more than a few others, he managed to complete his final recording before he left us; so much great music to choose from, but I liked this tune in particular, which actually is a cover originally performed by Johnny Mathis, believe it or not (David Live at the Tower Theater is a landmark performance, and “Serious Moonlight,” IMHO, is one of the greatest concert recordings of all time - I personally preferred the "thin white duke" phase as opposed to Ziggy Stardust)…

...though that doesn't mean he didn't make great music during the whole glam-rock thing too, like this.

Posted by doomsy at 1:31 PM No comments: