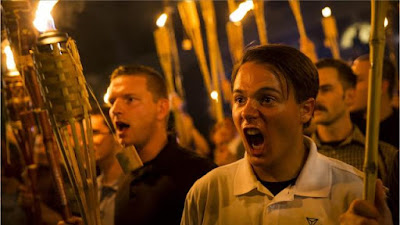 Farron Cousins tells us that “Pastor” Robert Jeffress has said that there would be “a Civil War-like fracture” if our Tiny Handed Treasonous Orange Meat Sack were to be removed from An Oval Office – so many reasons to detest Jeffress, pretending to be a “man of God,” which he clearly isn’t based on this, as well as a coward, egging on others dumb enough to buy his “culture war” rhetoric…

…and Thom Hartmann tells us about U.S. newspapers calling on the Gropenfuhrer to resign…

…and Brian Tyler Cohen tells us about Shep Smith unpacking the latest lies from Generalissimo Trump on Ukraine (a little past the news cycle I'll admit, but it bears repeating, especially coming from Fix Noise)…

…and if somehow God willing a Dem can manage to win the White House in 2020, I hope this person at least asks WA Dem Gov. Jay Inslee to be Secretary of Energy (but again, even if that happens, it won’t mean a damn thing without winning Congress too – every single damn election matters, and we should punish every single Republican for this horror show we’ve had to live in since 2016)…

Posted by doomsy at 1:46 PM No comments: 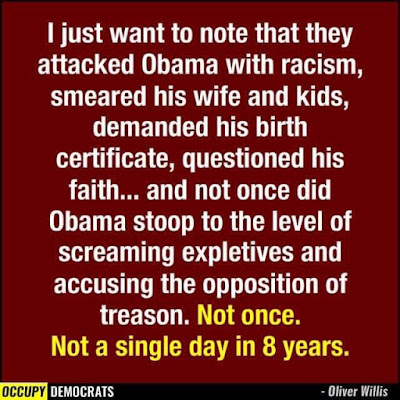 (I thought I’d take a bit of a break from our typical “Mad King Donald” insanity and remind everyone about this, and also wish the Obamas a very happy anniversary also; nice to see them trending on Twitter for good reasons – here).

In a weird way I guess (about the only way you COULD expect with the Gropenfuhrer), I now have to wonder why we went to the trouble of instigating a probe of Russian interference in our election and potential collusion, since apparently President Fergus Laing invited other heads of state to try and dig up dirt on Joe Biden today, as well as trying to discredit Robert Mueller…I mean, is there even a question at this point whether or not Number 45 has enough of a brain to know where to draw the line on this stuff? And I wish I could disagree with Ana on the Dems and Mueller, but unfortunately I can’t...

...and a trench filled with alligators and snakes on our border, huh? Someday this nightmare will end, I tell myself - more here from Seth Meyers...

…and David Pakman tells us that Trump’s support is polling 6 points lower than impeachment/removal – every Dem running for any elective office anywhere should hang this around the metaphorical neck of anyone who still supports Mango Mussolini, including this guy…

…and Farron Cousins tells us about Repugs in the land of the yellow rose getting all freaked out about their beloved base not holding sway in elections like they used to – somebody once said “demographics is destiny”…and yes, Karl Rove is an utter scumbag, but he’s nobody’s fool either…

..and speaking of fools, apparently Mark Zuckerberg of Facebook is all in a snit over the possibility of Elizabeth Warren winning this whole thing (here and more Zuckerberg idiocy is here...might be a good reason to delete your account); I tracked down this tune for the occasion (incredibly NSFW)…

...and RIP Kim Shattuck of The Muffs (here).

Posted by doomsy at 8:17 PM No comments: 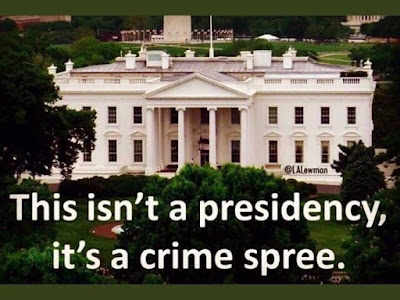 It looks as if the Gropenfuhrer may be losing it yet again right before our eyes, as Cenk and Ana tell us – we ventured into 25th Amendment territory long ago with this cretin, and all of this is just the icing on the proverbial cake (more here)…

…and John of “The Damage Report” tells us about U.S. House Dems grilling Giuliani and Pompeo (the TYT clip gave away a bit on Pompeo I realize – and I thought this was appropriate about the “Mayor of 9/11”)…

…and David Doel tells us about how Bernie Sanders, while not leading in every poll, is in the top 3 at a minimum on most, mainly because he focuses on policy ignored by the news organizations with initials for names, as emphasized by his fine new ad (and he did well with last quarter fundraising also, though I hope he manages to get some rest based on this…and yes, that means he’s definitely qualified for the job of president anyway)…

…and when it comes to blowing off Bernie, here is another ridiculous new example – again, I don’t know who I’ll vote for in the Dem primary since we’re a loooong way off from that, but if I support Bernie, I guarantee you it won’t be because of sexism – apparently, the subject in question here is a child of entitlement who works for the Center for American Progress, which used to be good as far as I’m concerned, but not any more apparently – still don’t understand why they couldn’t have found a way to help Think Progress...kind of a long-winded explanation by Michael Brooks, but he's right…

…and happy belated 95th birthday to President Carter on 10/1/19, speaking about renewable energy…

...and here's a neat new tune with words to live by. 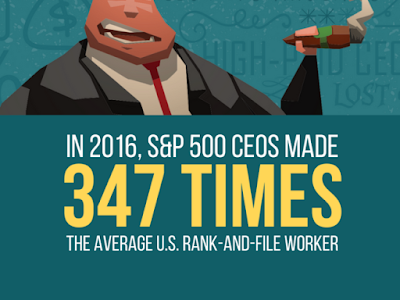 Kyle K. tells us about Stuart Varney trying to concoct some kind of a hit piece on Bernie Sanders and his support of striking GM workers – yes, ridiculous for all of the reasons astutely noted by Kyle in the clip (mildly NSFW...and yeah, supposedly, Bernie's support among African Americans is cratering - uh huh)…

…and keeping with the theme of income inequality, I give you this from John, Cenk and Mark Thompson…

…and boy, this is truly the stuff of nightmares – Sam Seder and the TMR crew present a clip of Naomi Klein telling us that the wingnuts could actually be WORSE than they are now if they come around on the issue of climate change…

…and I’m going to dig back in the archives a bit and present this from last December, with Farron Cousins telling us just how bad Jeff Flake really is in light of this; our bought-and-paid-for Beltway corporate media courtiers just LOVE to shine a spotlight on some supposedly middle-of-the-road Republican to lecture the rabble about staying in line, so they don’t do stuff the elite punditocracy doesn’t like, such as GM workers striking for higher wages and getting their health benefits back as shown in the first clip…

Update: I would be inclined to agree with this.

…and I now give you the latest installment of “This Day In Doomsy History” (more or less) from 9/29/14, and it would be a “Worst Person” segment from K.O. featuring Baby Newton Leroy Gingrich in which he criticized former President Obama for appearing as Disneyworld; the timing of this follows somewhat that of the U.S. Senate’s passage of the Contract on America a little over 24 years ago on 9/19/95, an utterly craven exercise brought to us largely from the disgraced former U.S. House Speaker (a bit of an NSFW update with Gingrich is here)…

Posted by doomsy at 1:42 PM No comments: