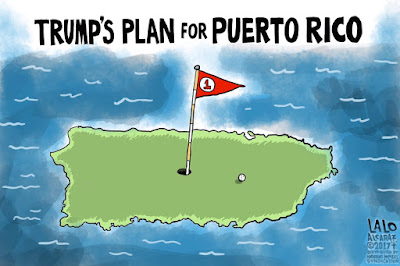 And yet, somehow, our sick, demented, attention-span-deficit toddler child of a “president” actually made things worse today for Puerto Rico (here and here)…

'I am begging...we are dying' — San Juan's mayor is stepping up for Puerto Rico since Trump won't pic.twitter.com/zdQomD8QPD


…and I thought this was some particularly good commentary by Farron Cousins about regretful Trump voters, and I’m not surprised that the catalyst for this commentary is Vice News, which, as far as I’m concerned, has the most courageous reporters on earth still practicing the actual craft – and it is that – of journalism; how in God’s name someone could vote for Obama and then turn around and vote for Trump is something I’ll never understand, but this did happen last year…I like the fact that Cousins emphasizes that trying to talk down to people will only make the problem worse…yes, I know I get snarky here at this site, but it’s because I’m trying to communicate a message in my admittedly imperfect way…I have never claimed to be the smartest person in the room and I wouldn’t do that because I’m not – I just believe that I have valuable information to share to help people make up their own minds, and make of that what you will – that has always been my goal here, and that remains so…

…and I have to admit that this “Resistance” commentary about the Pittsburgh Penguins of the NHL is a little personal for me, and of course I agree with K.O. – only an idiot would argue that Sidney Crosby isn’t the best hockey player on earth, having led his team to back-to-back Stanley Cup wins as Olbermann notes as well as a good deal of “hardware” for himself, but as somewhat of a lapsed Flyers fan, I should tell you that Crosby, along with his equally odious (but incredibly talented also) teammate Evgeni Malkin, engage in their own goonish, crybaby antics on the ice (to say nothing of the Pens as an organization, which staged a brawl over a few games with the hardly-innocent-themselves Winnipeg Jets that led to suspensions and injuries to each other’s players, with Pittsburgh GM Jim Rutherford complaining about those very antics while he recalled minor league goon Tom Sestito to deliberately injure a Jet player in response)…what on earth does any of this have to do with giving tacit endorsement to the behavior of the Gropenfuhrer? Maybe not a lot I’ll admit, but it fits into a pattern of organizational tone-deafness as far as I’m concerned…

…and in other political news this week, it looks like Repug Sen. Bob Corker of Tennessee won’t seek re-election, and guess who may decide to jump into the fray and run in response, as noted here? Why, none other than Marsha Blackburn (and by the way, in the following clip, Blackburn won’t tell you, of course, that “cutting discretionary spending” means kicking the “poors,” and when she praises the states for supposedly doing a good job, what she’s really talking about is this…)

…and kudos to former Dubya ethics lawyer (yes, that actually was a job for real with that bunch) Richard Painter for standing in opposition to President Tiny-Handed Treasonous Egomaniac here…

RETWEET So Taxpayers Can See How Trump's Administration Spends Their Money #Hardball pic.twitter.com/g7E6lnrhBk


…and related somewhat to Painter and his justifiable words, I give you this as a “don’t-let-the-door-hit-you-on-the-way-out” gesture to departing HHS Secretary Tom Price.

To paraphrase Farron Cousins of “Ring of Fire” here – it’s the income inequality, stupid! And let’s not forget this too...

…and Rachel Maddow has something to say about the Gropenfuhrer’s new tax plan – naaah, it’s not a shameless giveaway for the “pay no price, bear no burden” bunch…not much it isn’t; contrasted in the same report with the utterly scandalous mishandling of aid to Puerto Rico, which desperately needs all the help it can get (more here...if you can assist somehow, please click here)…

…and in the latest chapter of the “them that’s got shall get” file, I give you Equifax CEO Richard Smith, who will receive a nice payday even though he failed to secure the data of about half of the U.S. population from hackers – oy vay (here)…

Equifax's CEO stepped down after a massive data breach affected 143 million people — and he's walking away with a fortune pic.twitter.com/067FmqI9Oa

…and Kyle K. tells us that DEA admin Chuck Rosenberg has quit in response to the Big Orange Cheetoh – NSFW; to his great credit, Kyle has continually beat the drum about this country claiming it has the right to take out the families of terrorists, which we most definitely do not…I’m not sure how much of this I agree with after about 4:13 – I get Kyle’s “libertarian” argument to leave everything alone, but I don’t totally agree with getting rid of the DEA…serious reforms for real, sure, however…good argument by Kyle also about trying to keep everything from going underground…still thinking about this commentary…

…and I’m sure this is going viral now, as it should be, and that is Lt. Gen Jay Silveria of USAFA speaking out against racism (may we as citizens be worthy of the honorable tradition and sacrifice of our military men and women – here)…

…and I’m going out of order once more with K.O.’s great commentaries about Generalissimo Trump, but I think it’s appropriate for the moment (and speaking of disgraced former advisor Paul Manafort, I thought this was particularly repellent)…

…and with the passing of Hugh Hefner this week, I wanted to take a moment and bring you this clip from “Playboy After Dark,” a late-night variety and entertainment show from back in the Dippity-Do era…as I watched a few clips over the last day or so, I was struck when I recalled all of the big-name music acts that appeared on the program, as well as entertainers and other celebrities of the time; this features an early version of Fleetwood Mac in more of a bluesy than pop phase, with former guitarist Peter Green (also, kind of klutzy comedy with Arte Johnson, and was that Don Adams? And you'll have to crank the volume a bit)…

…and happy birthday tomorrow to Trey Anastasio of Phish.

Posted by doomsy at 2:11 PM No comments: 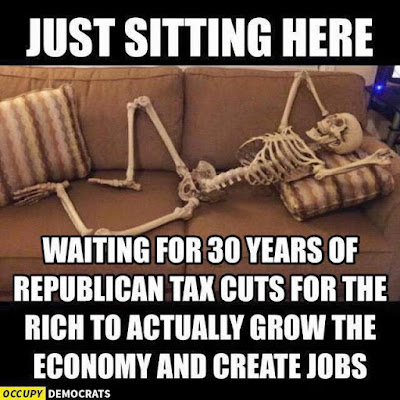 
…and K.O. opines here on Trump allowing Puerto Rico to die (and screw the bleeping Jones Act – I know the Gropenfuhrer has said that he’ll go to the island, which is literally better than nothing)…

…and it’s also thoroughly embarrassing that Alabama Republicans actually voted for that clown Roy Moore to victory in their U.S. Senate primary, but that’s where we are now all right – OK Dems, let’s actually remember the party we’re supposed to be all about, OK?...

…and RIP Hef – I don’t indulge in the kiss-and-tell gossip stuff, as it were, and I’m sure there was another side, but I think he ended up pretty well for a guy who wanted to sleep in late most days and go to work in his pajamas…

Update: I thought this was interesting about the departed Playboy founder also - kudos.

…and speaking of gender issues (were we?), it looks like Jared Kushner is registered to vote in New York as a woman (the jokes truly write themselves at times, people...now which party are the ones screaming about "voter fraud" again?)…

…and I think, if Hef wanted to leave us with a particular message, I think it would be expressed in the title of this song. 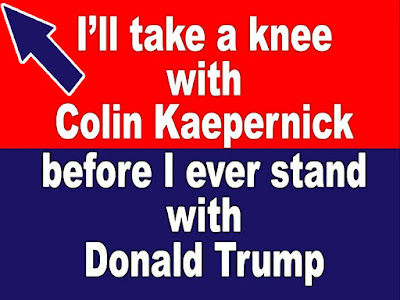 I’m not sure if I’m totally onboard with K.O. here on not standing for the anthem, but I DEFINITELY support what he tells us here otherwise; if someone decides to protest the anthem, that right should be respected without a doubt (and I also DEFINITELY respect the courage of Oakland A’s catcher Bruce Maxwell, among others)…

…and speaking of courage, two days ago marked the 60th anniversary of President Eisenhower’s use of the 101st Airborne on behalf of the “Little Rock 9” allowing them to enter high school (imagine the caterwauling if a president, especially a Democrat, tried that today – Fix Noise would be screaming for impeachment)…

…and though I know it’s hard to keep up with all of the outrages of Generalissimo Trump, I would say that allowing Puerto Rico to die is particularly horrible (to help, click here)…

Millions of Americans are without electricity in Puerto Rico – but all Trump wants to talk about is their debt to Wall Street pic.twitter.com/HlHTakG8pY


…and today is National Voter Registration Day; the video is from two years ago, but it definitely still applies, now more than ever as far as I’m concerned…

…and lost in all of the political flotsam over the thoroughly justifiable demise of Graham-Cassidy is the truly courageous vote of Sen. John McCain; if he is nearing the end, then he definitely is going out like a hero (McCain’s struggle will end one way or the other eventually and his good name will stand up for all time – on balance I’ll admit given some past misdeeds, but they pale in comparison now – but the stupidity of Louie Gohmert is eternal)…

…and Turner Classic Movies is showing the D.A. Pennebaker film of the 1967 Monterey Pop Festival at the moment, which reminds me that I utterly blew it by failing to acknowledge the 50th anniversary last June – please allow me to make up somewhat for that oversight with this memorable performance.

Posted by doomsy at 3:33 PM No comments: 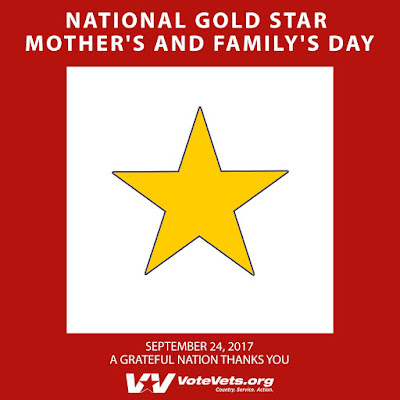 When you've lost Terry Bradshaw and Rex Ryan on the whole “take a knee” NFL thing, then yeah, I would say you've lost the moral high ground (and let’s not forget, as some particularly astute folk have noted, it isn’t about the flag or the anthem)…

Athletes and public figures are firing back at Trump's 'sons of b*tches' comments about the NFL pic.twitter.com/xqe3MI71nK


…actually, it has a lot more to do with what Hasan Piker notes in this very NSFW clip…

…and Cassidy-Graham is still very much alive, people, unfortunately (here – call 202-224-3121 to demand that our Republican congressional frauds VOTE NO!)…

Hundreds of activists gathered to protest the Senate Finance Committee’s hearing on the latest Graham-Cassidy bill, which would gut Medicaid pic.twitter.com/FfDA1B625f


…and Puerto Rico is still a total mess from Maria, as Cenk, Ana and Ben tell us – to help, click here (more here from our Tiny-Handed, Clueless, Treasonous Egomaniac-In-Chief)…

…and whaddaya know – it turns out Jared K. used a private Email server too (and it runs in the family of course)…