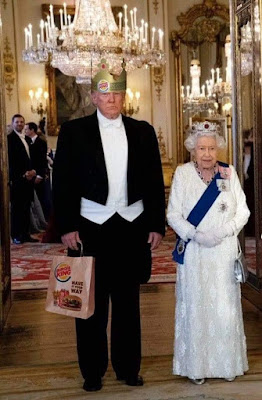 Farron Cousins tells us what an embarrassment Generalissimo Trump was on his recent overseas visit; anyone who had anything whatsoever to do with getting thus lummox elected in 2016 should be forced to wear ashes and sack cloth as far as I’m concerned (and God, are those water statistics scary)…

…and speaking of the prior clip, Jeff Waldorf of TYT Nation tells us that, according to a recent study – yeah, it’s long past time for us to do something about THE FREAKING CLIMATE!!! (and maybe Waldorf isn't the most exciting speaker, but his message, I think, is critically important)...

…and I have to admit that, even for Sean Inanity, the double standard on display here is particularly hilarious, as Brian Tyler Cohen points out…

…and tomorrow marks the 70th anniversary of the publication of “1984” by George Orwell (here); here is a clip from the movie with John Hurt and Suzanna Hamilton depicting this (and no, this isn’t a Trump rally, but I’ll grant you that it’s pretty close) – the film also featured the final screen role of Richard Burton as O’Brien; he could have easily won an Oscar for a few performances as far as I’m concerned, including this one…

…and with the prior clip in mind, I give you the latest installment of “This Day In Doomsy History” (more or less) from 6/4/13, with MoveOn.org in support of immigration reform – kind of sad to watch this I know when we had an occupant of An Oval Office who actually supported it versus the Treasonous, Tiny Handed Dictator Wannabe now in charge…

...and in a related story as they say, I give you Dem U.S. House Rep Joe Neguse (with no more sh*ts to give, to his credit) speaking out in defense of the recently-passed House bill (more here, and roll call is here – Bri-Fi will be tough to beat in PA-01 with commendable, common-sense votes like this, I have to admit; hopefully he'll cast a bunch of stoo-pid ones soon to shore up his base – but why is this not surprising in any way...once again, heckuva job, all you clowns in Indiana, Missouri, Florida and North Dakota who actually added to the Republican Senate majority last year)... 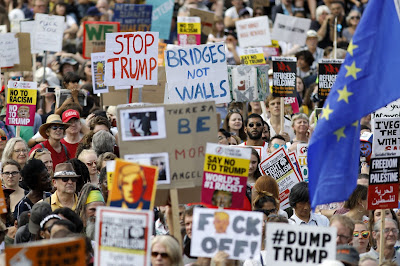 Brian Tyler Cohen presents more typical lies and nonsensical behavior from the Gropenfuhrer (to say nothing of his media apparatus, as noted here) in response to the London protests that greeted him (whether he’ll admit it or not of course) upon his U.K. state visit…

…and GREAT job by the Brits here to tell Our Treasonous, Tiny-Handed Orange Dictator exactly what they think of him…

…and speaking of petulant behavior from Generalissimo Trump, Brooke Thomas and Brett Erlich of The Damage Report give us more insight into that idiocy of covering up the name of/moving the U.S.S. John McCain…

…and God bless not just the U.S. military, but those of all of the Allied nations that participated in D-Day and liberated Europe; 75th anniversary commemorations are currently in progress (sorry if this fine report isn’t more U.S.-oriented, but I don’t want that orange turd to be highlighted in any way whatsoever)…

…and I think the prior clip is a nice segue into a tune that has something to do with travel, so here it is.

Posted by doomsy at 8:55 AM No comments: 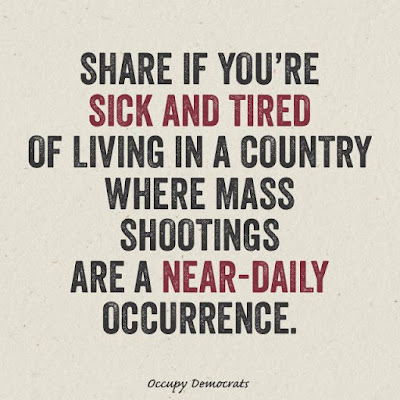 Well, here we go again…there’s probably more we need to find out about this latest gun carnage in our country, but apparently this lone lunatic actually DIDN’T use an assault rifle, but did somehow get ahold of a silencer for at least one of his two .45-caliber handguns (here – and how the hell is THAT legal also?)…also, it seems that in January, the GOP legislature in Virginia killed a bill to ban large-capacity clips such as the one used by the shooter (here)…figures…

…and speaking of murderous violence, I neglected to mention that last Friday was the 10th anniversary of the killing of Dr. George Tiller; here is Cenk Uygur with a TYT commentary from that time (more here)…

…and as long as we’re on the subject of abortion, the NowThis clip tells us about the battle being fought over it in Alabama; yeah, I have to admit that there are times when I have to check my own sense of entitlement also…easy to feel like “oh, look at this nonsense going on in the south – what is wrong with these people?” when in reality, we have no bragging rights whatsoever above the Mason-Dixon Line…and besides, that’s just more of the “divide and conquer” strategy that the other side wants so we keep yelling at each other while they keep giving tax cuts to the one percent (or even a fraction of that), starting wars without end, wrecking our public schools, stealing our health care, trying to rob us of Social Security, etc. - and I think this is some telling stuff also…

…and Sam Seder and the TMR crew tell us about Bernie Sanders pushing back on someone in Nevada who said he didn't campaign enough for HRC...I personally did not blame Bernie for that because I could see that he was campaigning as he said, but I DO blame the "Bernie or Bust" crowd who kept screaming about the super-delegates, which I admit was idiotic on the part of the DNC, but it seemed like some of Bernie’s supporters would not brook the idea of HRC as their candidate and were looking for ANY excuse...to be honest, I think there were a lot of dirty tricks going on to rev up the animosity between the Clinton and Sanders camps, launched by Bannon and co. probably with Russian help, and Bernie couldn't be expected to both campaign and clean up that garbage at the same time...I think his staff should have been more wise to that stuff, and this may be a bit of a tipoff...

…and given the first clip – well, I wish it wasn’t time for another one of my “gun” songs, but apparently it is.