RIP Gordie Howe (you can Google “Gordie Howe Hat Trick” if you want in case you somehow don’t know what it is – his son was probably the best defenseman the Flyers have ever had, and they got him in a trade)…

…and I thought this was a good recent commentary from Bill Maher (in defense of socialism vs. capitalism)...

…and kudos to Sen. Elizabeth Warren for her defense of Judge Curiel here (but PLEASE don’t try to make her the VP…and oh yeah, the predictable response from “Mr. Tiny Hands” is here)…

…and speaking of “Donald Drumpf,” I can’t let the week end without taking note of this disgusting spectacle (more here)…

…also, John Oliver did something truly amazing earlier this week - here is the video (and doing so with humor as always)…

…and yesterday would have been the 125th birthday of legendary American songwriter Cole Porter.

Posted by doomsy at 4:02 PM No comments: 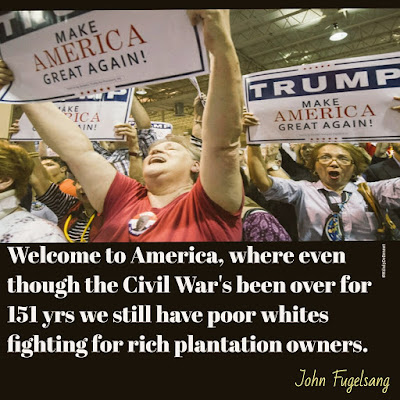 …and it’s time once more for “This Day In Doomsy History,” but we’re just going back about two years this time to 6/4/14 to remind ourselves of the benefits of the Clean Power Plan from President Obama which, as noted here, was stayed by the High Court of Hangin’ Judge JR pending judicial review – uh huh, yeah, right…the Plan was opposed by that nematode Pat Toomey, PA’s own waste of space in the U.S. Senate (here) – to do something about that, click here…

…and continuing the environmental theme somewhat, I was wondering what Lee Camp was up to – here, he tells us that Bayer and Monsanto are trying to merge…what could go wrong (snark)…

…and very much unlike the prior clip, I would say that this is a combination that definitely works.

Posted by doomsy at 6:09 PM No comments:

Yep, if it’s a day of the week with a “y” in it, count on Marsha Blackburn of Tennessee to say or do something stupid, as she did here...actually, I think she should be prosecuted for it, though I know they’ll never make the case – pretty close to the female equivalent of Louie Gohmert, only with the catty, bitchy edge; would truly be a gift from above if she ended up as the veep for “Donald Drumpf”…made me recall this clip from not quite four years ago (and of course, when Republicans talk about cutting “discretionary spending,” what they really mean is this)…

…and this, as far as I’m concerned, is terrific news – hopefully not too late; made me recall this great movie (and yeah, you can follow the wretched thread on what led to the electric car’s demise to the other architects of ruin from the prior decade)…

…and returning to the election, why am I not surprised that “Fergus Laing” is a 9/11 moocher also…

…and when it comes to Blackburn, I can’t resist including this little number, even though I just put up a tune by the Rolling Stones last week. 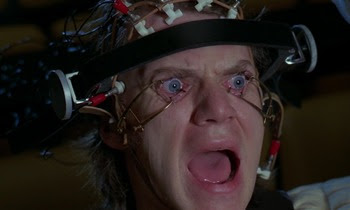 This is how I felt last night trying to watch The Comcast Network over their anointing of HRC as the Dem presidential nominee – given that, I think this is particularly timely from Kyle Kulinski (NSFW of course)…

...and keeping with that theme, Samantha Bee does it again (here)...

...and speaking of Donald Drumpf, I'm glad to hear from The Dixie Chicks once more (here).

Posted by doomsy at 6:51 PM No comments:

I’ll be honest – I think the writing is on the wall for Bernie…I think he ran a hell of a campaign, but some people I otherwise respect who support him are acting a bit unhinged (here)…that being said, I still thought this was a good NSFW commentary from Kyle Kulinski on Sanders (kind of loses me a bit with the last 2 minutes to go, though – does he SERIOUSLY think Hillary Clinton is worse than ANY REPUBLICAN??!! Bernie is great, but like all pols, he has stuff in his closet too)…

…and I’ll listen to Charlie Pierce talk about politics any day of the week, but I’m glad he knows so much about sports also (re, Muhammad Ali)…

...and I thought this was a great commentary about the media (especially about MSNBC) and the campaign from Bill Maher (even from that barely tolerable tool Matt Welch; we're not voting for "entertainer in chief" you meat sack - and sorry, it IS funny...NSFW)...

…and to commemorate the anniversary of the passing of Robert F. Kennedy (here), I had this song in mind (and yes, I know it’s really about Dylan, but it’s about activism too).

Posted by doomsy at 3:38 PM No comments: 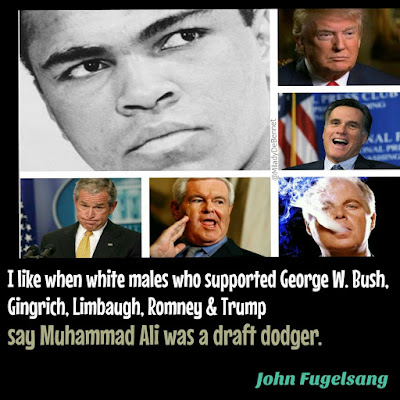 RIP Muhammad Ali – family members of mine who served couldn’t stand him because he ducked out of service himself, but Ali turned out to be dead right on Vietnam…created the template for today’s loud-mouthed, self-promoting athlete, but he backed it up – also did a lot for activism for various causes including Parkinson’s as noted (paying an awful price for his success), and it took a particular kind of courage to get into that ring with George Foreman in the Zaire fight; I come to praise Ali, not to bury him…I think, ultimately, he deserves our respect…

...and kudos to the Polish women in this video in response to this (timed a bit for Sunday, I’ll admit) - would like to have seen a response like that in this country to this propagandist (and I partly blame myself for that too)...

…and with other worldly matters supposedly in mind, Mississippi Gov. Phil Bryant received a “religious freedom” award from some right-wing group; Bryant says he wants to be “crucified” for his beliefs (hey, I’ll bring the hammer and nails, you bigot – NSFW)…