Posted by doomsy at 1:03 PM No comments: 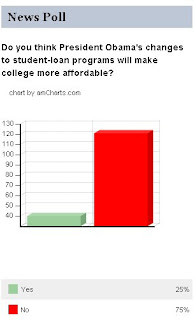 Meanwhile, this tells us the following…

DENVER, Colorado — US President Barack Obama Wednesday dwelt upon his own struggles with student debt, as he laid out a plan to ease the burden of college loans and reached out to young voters in key swing state.

The president, on his second visit to the Rocky Mountain electoral battleground of Colorado in a month, said he and his wife Michelle spent years paying off a combined student debt load of $120,000.

“This is something Michelle and I know about first hand. I’ve been in your shoes. We did not come from a wealthy family,” Obama told students at the University of Colorado.

“Our folks didn’t have a lot of money. We didn’t even own our own home. We rented most of the time that we were growing up.

“We were able to land good jobs with a steady income. But it still took us almost 10 years to finally pay off all our student debt,” Obama said.

“We want you in school. But we shouldn’t saddle you with debt when you’re starting off,” Obama said, referring to the high fees, in the tens of thousands of dollars a year, many US students face on the way to a degree.

Obama’s plan, to be enacted by executive order, will mean payments would go down for 1.6 million Americans who are stuck with student loan debt, officials said.

As positive a development as this is, however, there is the following to consider (here)…

"It's a step in the right direction, but a lot of people who need the relief right now won't be the ones who benefit," said Mark Kantrowitz, who publishes the financial aid websites Fastweb.com and Finaid.org. "This plan doesn't do anything for a majority of distressed borrowers. It only helps those still in school."

And by the way, what of Former President Highest Disapproval Rating In Gallup Poll History on this subject? I give you this…

Making matters worse was a 2005 President George W. Bush decree that student loan debt is the one thing you can’t wriggle away from by declaring personal bankruptcy, says (Peter Thiel, co-founder of PayPal). “It’s actually worse than a bad mortgage,” he says. “You have to get rid of the future you wanted to pay off all the debt from the fancy school that was supposed to give you that future.”

Also, for comparison purposes, I thought it was a good idea to include this response from the WaPo on the very same subject… 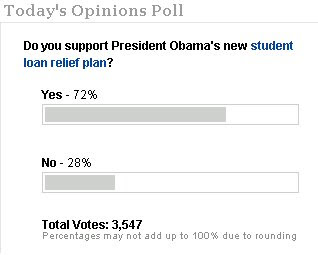 Oh, and as long as I’m commenting on the Courier Times, allow me to compliment the paper on its wonderful new layout with its oversized photos and reduced amount of type. If I wanted to subscribe to a third-grader reader trying to pass itself off as a mass circulation almost-daily newspaper, I would do so.

Update 10/28/11: And for further evidence that Obama is doing the right thing here, I give you this.

Posted by doomsy at 1:26 PM No comments:

Posted by doomsy at 2:09 PM No comments:

Posted by doomsy at 1:17 PM No comments:

(Note: Posting will continue to be sporadic, with no videos for the foreseeable future.)

Posted by doomsy at 1:37 PM No comments: