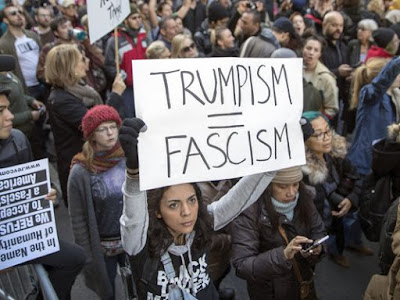 Cenk and Ana of TYT tell us about the typically disgusting legal machinations of the Trumpsters against the Election Day protesters in D.C. (more here, and that bastard James O’Keefe is affiliated with these maggots at Project Veritas, let’s not forget…more on Jennifer Kerkhoff is here)…

…and Michael Brooks of The Majority Report talks with Eric Levitz and reminds us that Puerto Rico is still suffering in what you could argue are Biblical proportions at the hands of Generalissimo Trump and his gang (to be fair, though, extracting from Puerto Rico is a politically bipartisan offense – all totally unnecessary; this is what happens when you put people in charge of government who REALLY SUCK AT government)…

…and Rachel Maddow speaks with Dem Danica Roem, who supported Medicaid expansion in VA, which just passed (elections indeed have consequences…I would ask that you pay particular attention to this clip from about 4:45 to the end)…

…and for the completely wrong-headed and diametrically opposed point of view, I give you this report from Kyle K. (NSFW of course…and to tell Repug Rep Bill Carrico what you think of his “you’re gonna die” comment, click here)…

…and Trevor Noah tells us how the Gropenfuhrer recently met with “reality TV” star Kim Kardashian and, perhaps, took away the completely wrong lesson as you might expect (namely, his pardoning of Dinesh D’Felon)…

…and I’m definitely overdue with this, but here it is anyway, namely, the latest installment of “This Day In Doomsy History” (more or less) from 5/30/08, in which I present the tune that swept the nation at the time – heh…(yeah, the “stim” from Dubya ended up being worth about as much as our Tiny-Handed Treasonous Orange Dictator’s tax scam will likely turn out to be, happily signed off on by Bri-Fi in PA-01…to do something about it, click here)…

…oh, and while everyone is mad at Sam Bee for what she said about Ivanka Trump, I thought I’d bring you this bit from the show which has been overshadowed I’m sure (based on this – and by the way, in the context of this brouhaha, let’s not forget this too)…

…and I can’t say if I’m “electrified” or not, but since it’s the weekend, give me a few hours and I might end up a little “baked” (hey now!). 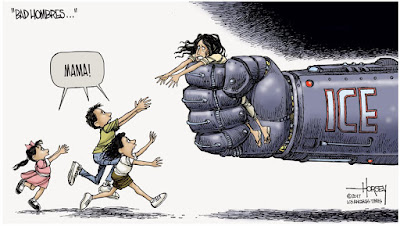 (In the upper left corner, the wording says “Bad Hombres” from our Tiny-Handed, Treasonous Orange Dictator of course.)

To begin (with the pic in mind), Rachel Maddow talks with Dem U.S. House Rep Ted Lieu about the ridiculous and cruel policy of the Trumpsters of separating immigrant kids from their parents at the U.S. border (And by the way, there is NO “Democrat” component to this, as noted here – this is Generalissimo Trump’s fault ALL THE WAY)…

…and, in continuing to gin up his base, the Gropenfuhrer keeps revving up the insanity, this time in saying that Nancy Pelosi loves the terror group MS-13...more here (gee, any actual, y’know, GROWNUPS in the “party of Lincoln” to rein in this lunatic? Guess not…)…

…and I know I’m behind on the videos when it comes to the latest media outrages so I missed all the Roseann Barr stuff (and again, this woman has been nutty on Twitter for years), so I’ll attempt to make up for that here (by the way, there was a great discussion on “All In” with Chris Hayes about this where Jennifer Rubin actually owed up to covering up for the troglodytes in her party – kudos to her – and Sam Seder traced all of this back to Flush Limbore…it actually goes back further than that, but good for him also…but of course the video isn’t available from the web site of The Comcast Network…I look at it this way; you want to defend Barr? Then defend Kathy Griffin too – and by the way, I’m not willing to do either)…

…and happy belated 60th birthday to Neil Finn of Crowded House (and joining Fleetwood Mac on tour – should be interesting). 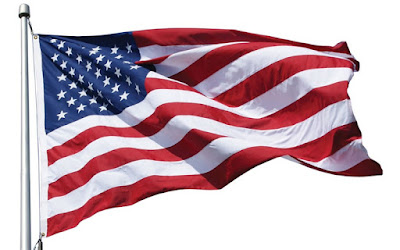 Alex Jones may be the very lowest of the low-hanging fruit, and he should be treated accordingly, but once in a while he says something too offensive to ignore IMHO, as he did in this case about Pope Frank, as Kyle K. tells us (NSFW – the Pontiff followed his enlightened words with this, it should be noted…report apparently has not been confirmed)…

…and this BBC report tells us that the abortion referendum in Ireland to overturn the ban passed recently (and of course, there was the predictable rhetoric about “culture of death” and “Satan winning this battle, but Jesus will win the war” from the pulpit yesterday – you see, according to the Church, abortion is the fault only of the woman, and not the man who impregnates her, the doctor who harangues her, or certainly not the cleric who harrumphs at her…the church will always believe it has the right to regulate women’s bodies for them; by the way, as you watch this video, I would ask that you read this also, which states, among other things, that women can be prosecuted in the Dominican Republic, El Salvador and elsewhere if they obtain an abortion, which is exactly what “social conservatives” in this country want…as I’ve said many times, Bill Clinton once said abortion should be safe, legal and rare, and I think that nails it...this does too)…

…and since it is Memorial Day after all, I present the following…

…and I think this suffices as a song for the occasion.

(By the way, posting may be sporadic this week – we’ll see.)
Posted by doomsy at 6:45 AM No comments: