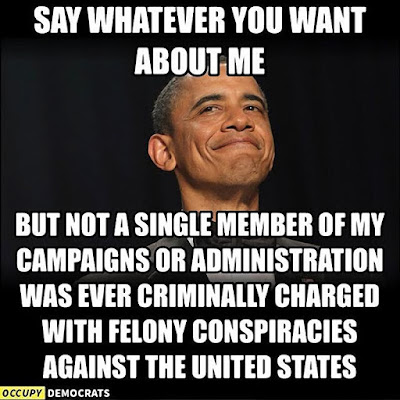 Oh yeah, doesn’t Preznit Tiny Handed Treasonous Egomaniac have a “great memory”? Sure he does...

Trump says he has the best memory.⁰

All of a sudden he can’t remember the meeting with George Papadopolous. pic.twitter.com/7Kp3NRa6oZ


…and as Kyle K. tells us, it looks like the Trumpsters, Rex Tillerson in particular, are trying to get a PERMANENT AUMF – just charming; anyone for GWB 2.0 on steroids this time??!! And NSFW of course...

…and I don’t believe I’ve said a lot between the utterly deranged and totally false comments from former Gen. John Kelly about Dem Congresswoman Frederica Wilson, but fortunately, Dem U.S. House Rep Ruben Gallego does so here – Kelly’s horrific personal loss, while generating sympathy, doesn’t justify his conduct in any way; referring to Wilson as an “empty barrel,” which is a disgusting remark, is his opinion I realize, but he’s demonstrably false in his characterization of what happened at the ceremony in question as borne out plainly by the video…

…and sorry, but I’m not giving the “Foxies” a shred of sympathy over their alleged “news” network and its almost total silence on the Paul Manafort, etc. story recently – I’m with Cenk, even though the so-called “Uranium One” thing allegedly involving HRC was bogus now, then and always…


…and maybe Sam Bee is painting with a bit of a “broad” brush (if you’ll forgive the expression) when it comes to men and guns, but the statistics don’t lie, so I think she’s justified – it’s waay past time to connect as many possible dots, as it were, on this issue as possible (NSFW also)…


…and speaking of tragic gun deaths, Lawrence O’Donnell tells us how LBJ reacted in a very statesman-like and thoroughly un-Trumpian way after Sirhan Sirhan killed RFK, to say nothing of Ted Kennedy calling for the life of his brother’s assassin to be spared (Chis Hayes also echoed similar sentiments, saying that Generalissimo Trump ought to keep his damn mouth shut in the wake of the NYC terror attack so as to not help the case of the allegedly murderous defendant – good luck with that, I know…also, I should probably catch up with the video of O’Donnell talking with Chris Matthews about the latter’s book – yeah, Tweety is too much of a Beltway media sycophant at times, but he’s also an accomplished author, believe it or not…)…

…and happy belated 70th birthday to Dave Pegg, with Jethro Tull for a time as well as Fairport Convention. 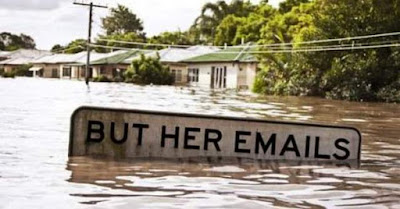 (I guess this sign is a metaphor of sorts, except for people flooded out from the hurricanes where it represents reality, unfortunately.

And speaking of cities that have suffered misfortune, congratulations to the world champion Houston Astros of baseball, including former Phil Ken Giles. I personally was rooting for the Dodgers, to be honest, but that’s OK – happy for Houston all the same. It was still a much-needed shot in the arm for a city flat on its metaphorical back, which is good.)

And on the subject of being flat on your back, literally, I give you this item about the reporter who was tripped to the ground and face planted because…well, he apparently violated a swearing ordinance in Virginia in the presence of a Republican, or something – another chapter of the book “Life in These United States Under Generalissimo Trump,” or something…

…and I know it’s telling that K.O. is quoting Republican politicos like Ed Rollins and their unofficial spokespeople like “BoBos” Brooks, but I have a feeling that the emerging narrative from congressional Repugs trying to hold onto their stinking jobs next year will be “Hey, it wasn’t MY fault. I did everything President Big Orange Cheetoh TOLD me to do, Chucky and Davey Koch! I didn’t think he was actually nuts. Now can I please have a million dollars?”…

…and fortunately, Rachel Maddow makes sure we keep our eye on the proverbial ball, as it were, when it comes to the Gropenfuhrer and his Russian handlers (yeah, I would say that it’s time to pretty much etch some of this stuff in stone too...and Dem U.S. House Rep Adam Schiff continues to stand tall, earning the perpetual ire of the wingnuts of course)…

…and Donald Drumpf Jr. is referred to in the Maddow report, and apparently he was up to some antics over the recent holiday; fortunately, Stephen Colbert gives him a sweet comeuppance, you might say (to paraphrase the poet, liquor may be quicker, but candy is dandy this time around)...

…and to me, this is one hell of a dynamic duo, you might say (Holy Justice For the 99 Percent, Batman! – yeah, I admit that was a bit of a stretch even for me)…

The GOP unveiled their tax proposal this morning. Who wins and who loses in their plan? Bernie and I will tell you. pic.twitter.com/AjXyKyA8AA


…and the line “We’re the ones we’ve been waiting for” is right out of an Obama campaign ad I know, but that doesn’t make it any less true as far as I’m concerned. 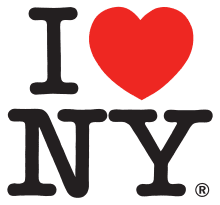 TYT reports on the coward in NYC who plowed into the crowd with his car (glad Cenk mentioned the situation in Myanmar with the slaughter of the Rohingya, which I haven’t touched on, while former human rights champion Aung San Suu Kyi apparently looks on and does nothing…good job here to give the total picture concerning all of our interventions around the world and how that could be a factor I believe)…

…and Rachel Maddow provides some context here also (I think the line about the most ISIS fighters possibly coming from the former Soviet republics based on what they know, noted by the New York Times reporter, is very interesting)…

(Didn’t mention this earlier, but condolences and sympathies to the victims of course and their families – now let’s try this animal in this country as opposed to GITMO, for God’s sake, and if convicted, either lock him up for life or set up a date with a needle.)

…and here is the ad that has made wingnut heads explode all over the place; I‘m sure this is no surprise, but I agree with every damn word of it…

…and with that in mind, K.O. gives us the latest here…

…and with the news of the recent attacks in NYC, I thought this was an appropriate tune. 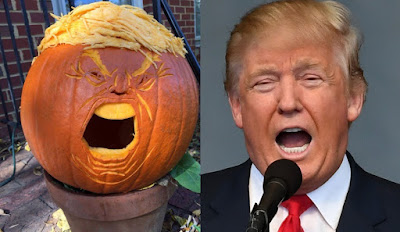 Yeah, it looks like tonight is a night for all the kooks, creeps, and goblins all right – and if you think I was referring to the Trumpsters, then you win a free sack of year-old Kit Kat bars (though I think Keith has his holidays mixed up a little here)…

…and once again, think about how fast a DEMOCRAT would have been removed from office, tried, convicted, and sentenced to hard labor by now if that person had pulled any of this garbage…oh, sorry, “allegedly” pulled this garbage…

…and leave it to Stephen Colbert to remind us just how desperately the Foxies want to play their game of “Oh, LOOK OVER THERE INSTEAD!” (here)…

…and Thom Hartmann talks to Dr. Karen Seal Stewart of the group Patriotic Millionaires in opposition to the Gropenfuhrer's latest tax cut proposal...

…and this may be a first, not just for the holiday but overall; I now give you a double dose of “This Day In Doomsy History”…first is from 10/31/08, in which I present more delusional musings from the one-time base for Sen. John McCain and Caribou Barbie, who, I’m quite sure (though I have no proof) would end up being just solid for Generalissimo Trump…

…and the second is from 11/2/07, in which kids tell our politicians what they can do about being used for photo-ops if their health care funding isn’t renewed, which, sadly, is currently a “thing” also now, as noted here - more here...and by the way, while our corporate media is trying to spit-shine the thoroughly sullied reputation of Former President Highest Disapproval Rating In Gallup Poll History, let’s not forget that he vetoed SCHIP funding, as noted here)…

…and speaking of kids, Happy Halloween, everybody. 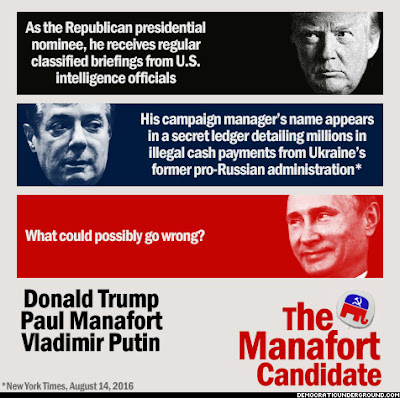 …and K.O. reminds us once more how the Gropenfuhrer uses (abuses?) Twitter (though I think calling #45 the “FDR” of ANYTHING is more than a bit much…I get Keith's point, though)…

…and Rachel Maddow tells us about what is apparently the surprise resignation of U.S. Attorney Dana Boente – maybe not the biggest news story at the moment, but then again, based on the Mueller probe – well, we’ll see, won’t we…

…and I think this video is particularly timely given this story (kudos to the Houston Texans for standing up – or “kneeling” up, I guess – to their stupid owner)…

Athletes have been protesting for decades. Stop telling them to stick to sports. pic.twitter.com/uM93MjoUpg


…and I know I touched on this already, but I’m going to do so again; Farron Cousins comments on that utterly disgusting budget passed by the U.S. House last Thursday (and, as noted previously, “Bri-Fi,” who has problems on other issues, commendably voted No as one of the 20 Repugs who opposed this atrocity...oh, and by the way, it's true that they should do this anyway, but how about some props to the Dem caucus for remaining in total opposition?)…

…”and I’m proud to be an American, where at least I know I’m free”…and yes, that definitely is snark (oh, and with that tune in mind, I give you this)…


…and yeah, I always wait until the end of the month for this tune with about one day to spare, and I’m doing it again here.

Posted by doomsy at 3:23 PM No comments: