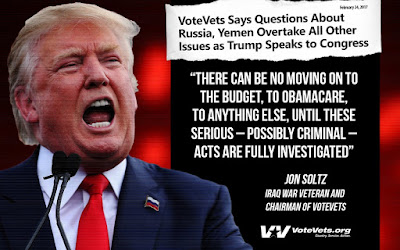 John Oliver does it again, this time on the Repugs and their alleged replacement for the Affordable Care Law (NSFW)…

…and Bill Maher has some cautionary words for our corporate media – I’ll put down even money that they’ll never listen, unfortunately (I think Maher could have done better than to use a poll by Fix Noise, though I'm sure he's basically right - here - NSFW also)…

…and Rachel Maddow’s “A” block last night was pretty terrific, which basically was the leaked DHS justification for the death of the Muslim ban (here), something I would call one of the top 10 stupidest ideas of any presidential administration, but her “B” segment was great also, arguing that the thoroughly compromised FBI of James Comey held out details of Jeff Sessions’s meetings with the Russians during Sessions’s confirmation hearing for Attorney General, something pretty much confirmed by Dem U.S. Rep Adam Schiff in this clip, who hinted that he may call for a subpoena to Comey to get the information we should all know about by now (once again, great thanks to all of you nitwits who did whatever it was you did to make sure we were saddled with this kleptocratic cabal of crooks and idiots…and nice job by Rachel to sneak in the reminder about how Comey & Co. went nuts over the alleged Hillary Clinton ZOMG BENGHAZI BENGHAZI BENGHAZI EMAIL EMAIL EMAIL!!! stuff, made all the more idiotic by this, by the way)…

…and just to give you an idea of how truly stoo-pid our media is (as noted above I know), now that the site of the DAPL protests is being shut down, there are a lot of stories along the lines of “oh, the trash at the site was so bad – boy, these people sure aren’t ‘eco-friendly’ after all” (here).

THEY WERE LIVING AND PROTESTING THERE FOR ABOUT SIX MONTHS! WHAT THE HELL DO YOU EXPECT? YOU TRY DOING THAT TO TRY AND PROTECT YOUR DRINKING WATER AND LET ME KNOW WHAT YOU DO!

And maybe burning a camp site wasn’t advisable, but at least that’s one way to prevent germs and disease from spreading. 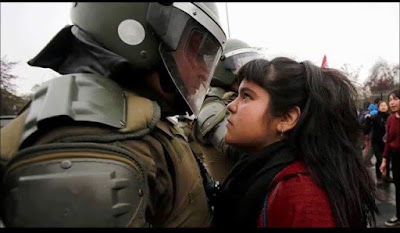 Well, to me, here are two takewaways: 1) The great pic from above courtesy of McSpocky on Twitter, and 2) The report below (and yeah, I know this is from The Putin Network, but I think the militarization of our cops continues to be a big story).

Since Election Day, KY and MO legislatures have already passed “right-to-work” bills and CO, CT, and ME are considering such laws. pic.twitter.com/gCtrn5nHzb


...and this was not exactly a shining moment by Betsy DeVos recently, but typical...

Who TF is Betsy DeVos kidding when she calls HBCUs 'pioneers of school choice'?? pic.twitter.com/MeIbGZxn2E


…and kudos to K.O. for still trying to diagnose what’s going on with the “Gropenfuhrer”- I would add, though, that former Repug Sen. Henry Cabot Lodge’s relentless opposition to the League of Nations had at least as much to do with defeating it and ushering in WWII as President Woodrow Wilson’s stroke… 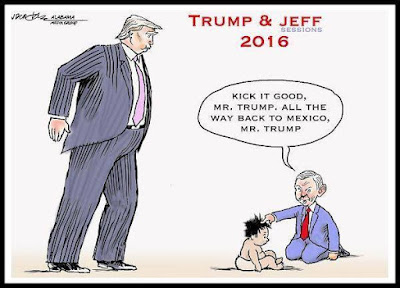 Funny, but I don’t hear a lot of pontificating from Jefferson Beauregard Sessions III at the moment (oh yeah, what an alleged paragon of virtue to recuse himself from an investigation about Russia – if this were a Democrat, this person would be facing firing and a possible prison sentence for perjury, which is exactly what Sessions should be facing too…more here and here)…

...and Shep Smith had better be careful here or else Fix Noise will send him back to "the factory" I'm sure, so they can drill those conservative talking points into his head for good (yeah, I guess some anonymous sources actually matter, if they’re from Number 45 of course – I’m not sure Chris Wallace was kidding when he asked Smith if he “like(d) it here”)...

…and Seth Meyers gives us his analysis of Number 45’s SOTU address, which I realize is a little behind the news cycle at this point (yeah, look how fast “No Corporate Tax” Pat Toomey leapt to his feet to applaud, and also, the “Gropenfuhrer” really should at least try to educate himself about Harley Davidson and look up that great clip by Lawrence O’Donnell that tells us that what really saved the motorcycle company was learning process improvement from the Japanese, such as fixing their leaky oil pans)…

…and did you know that yesterday was National Pig Day? Well, it was (and I know this song is a metaphor only – yeah, yeah, yeah :-). 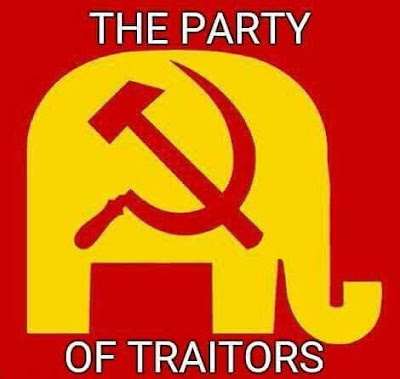 Silly Bernie Sanders, expecting the “Gropenfuhrer” to pay attention to dumb stuff like, y’know, actual policy and details like Number 45 said he would during the campaign (tongue in cheek, of course…here, here, and is Bernie ever spot-on here)..


…as we know, though, Generalissimo Trump is good at trying to shift blame (here)…

President Trump has a much different idea... pic.twitter.com/bLXdI8CbLW

Ahead of tonight's speech, watch our new video to learn how Trump turns lies into near truths. Then make sure he doesn't get away with it. pic.twitter.com/Y1P9zPDaKS 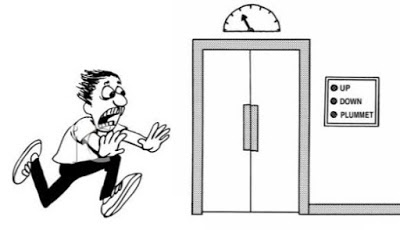 …and harking back to President Tiny Handed Egomaniac, I have to admit that “No Corporate Tax” Pat Toomey (R-Elevator) has come up with a novel way to try and avoid protestors, and that is to move his office building (here...and related to President Fergus Laing, I think this is about what you would expect from someone who abuses women)…

…and I think Kyle provided the necessary context here on that toad Matt Lauer trying to making us forget about the ruinous reign of Former President Highest Disapproval Rating In Gallup Poll History (NSFW…and by the way, this should be required reading for all of the utterly bought-and-paid-for members of the media/political/industrial complex)…

...and this tells us that scientists are trying to find a way to replace ice in an arctic shelf (cue the wingnut umbrage over “out of control government spending”: five, four, three…)…

Scientists want to manufacture ice in the Arctic to replace the areas that are already melting pic.twitter.com/Lm8bIR4R1M


…and speaking of ice, I think this is a “chill” kind of tune to usher in the month of March. 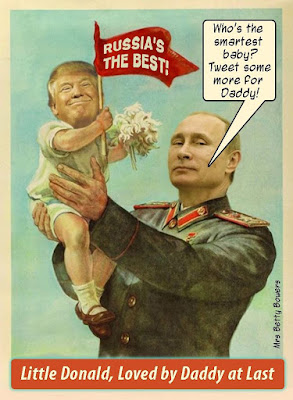 Yeah, it takes a while for Rachel Maddow to get to the payoff here, as she notes at the beginning, but there’s a hell of a good reason (more drip! drip! drip! on President Fergus Laing and his sleazy Russian deals – hard to imagine that the nexus of all of this could be new "Trumpster" Commerce Secretary Wilbur Ross, but you never know)…

…and K.O. says it’s time for a grand jury – long past that point by now, I would say…

…and speaking of Russia, boy, are those CPAC characters stoo-pid (I wish Cenk would stop holding back and tells us what he really thinks :-)…

…and “Yes, Wiccan”? And of course, leave it to the “people of faith” to defend Generalissimo Trump…


…and in my quest to keep this site interesting and not necessarily repetitive, I should note that February is mating season for skunks (here); kind of tipped off to that a bit by the presence of these creatures lying dead in the road, unfortunately (if I’m going to include an item for February, I’d better hurry up)…

…and you just KNEW this was coming, right?

Posted by doomsy at 3:33 PM No comments: 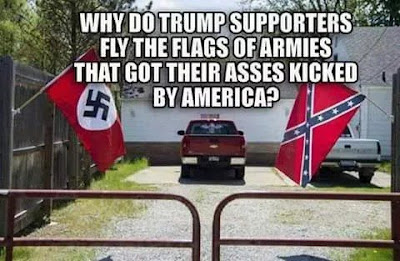 I give you more cluelessness on trade from Generalissimo Trump, Part The Infinity as Charlie Pierce might say (more here)...

President Trump said we have no trade surpluses.

We have trade surpluses with:
🇬🇧
🇳🇱
🇧🇷
🇧🇪
🇸🇬
🇭🇰
🇸🇦
🇦🇺
🇦🇷
🇵🇪
🇭🇳
And over half the world pic.twitter.com/CaZPSn5K2d


…and did you hear the ones about those Republican “mavericks” opposing President Fergus Laing? Yeah, right (as Kyle explains...and I definitely don't share his opinion of Rand Paul, by the way, who, for my money, is an idiot - NSFW)…

The resistance is happening through both political activism and consumer activism. pic.twitter.com/ELyL9A2MWo


...and Chris Hayes talks with Rumana Ahmed, the Muslim woman who lasted for 8 days under Trump…

...and I have to admit that I didn't pay a lot of attention to the Oscars on Sunday, though I have to also admit that I can’t possibly understand how Price Waterhouse could screw up the envelopes for Best Picture the way they apparently did here (sooo, the envelope with Emma Stone’s name appeared I believe, but wouldn’t that have been used already since the Best Picture Oscar is supposed to be the last one? So confused…and try not to be too hard on Faye Dunaway, OK?).

And apparently, the show messed up the “In Memoriam” segments also (here), though they did have an ad for Rolex watches that I thought was awesome, with a whole gang of stars including a young Brando (and they managed to include Bill Paxton also, which was a classy touch).

Well (by way of a long setup I’ll admit), I’d like to include this clip, which is also a memorable highlight as far as I’m concerned…

The real life inspiration for 'Hidden Figures' made a surprise appearance at last night's #Oscars pic.twitter.com/bvJ3ysPtdo

Posted by doomsy at 3:52 PM No comments: