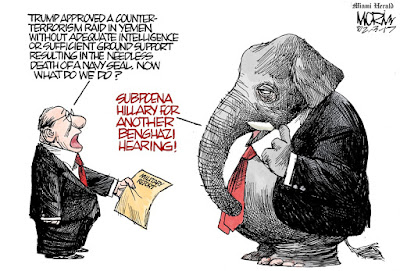 Kyle K. comments on Trump’s Yemen raid (NSFW - and don’t think this automatically absolves Obama completely, by the way – of course, it would have been NICE if we’d had an INTELLIGENT debate about drone attacks from those idiots in Congress, primarily Republican but some Democratic also…I will add a very slight qualifier for Trump in that I’m sure this plan was drawn up under Obama, but the buck stops you-know-where, as they say)…

…and Chris Hayes also responds on the Yemen attack, speaking with reporter Ken Dilanian and Congressman Adam Schiff (and no, I’m definitely not reassured either)…

…and Cenk and Ana tell us about the Trump voters’ family thrown out of the country from our beloved commonwealth (cue the world’s tiniest violin – how dumb could you be to vote for this guy and not expect this? And Cenk and Ana are right about PA making a difference the wrong way, sadly – I still think the fake news was a big factor; I can tell you right now that something on Facebook about the Pope supposedly supporting Trump would make an impact, and that was forwarded about 800,000 times before anybody knew what was going on)…

…and Thom Hartmann brings us the latest on Neil “Liberals Are Addicted To The Courtroom” Gorsuch, Fergus Laing’s nominee for the Supreme Court (and did you know Gorsuch was involved in Hobby Lobby? Well, he was)…

…and it’s time once more for another installment of “This Day In Doomsy History” (more or less) from 2/6/10 – Repug Sens. Richard Shelby, Jon Kyl and Sen. Mr. Elaine Chao blocked the appointment of cabinet-level positions in the Pentagon under former President Obama, something to remember the next time you hear any of these oh-so-august-in-their-imaginations members of “the world’s greatest deliberative body” bitching about Dem tactics in response to the child with impulse control issues currently taking up space in An Oval Office…


...and happy 70th birthday to Dave Davies of The Kinks. 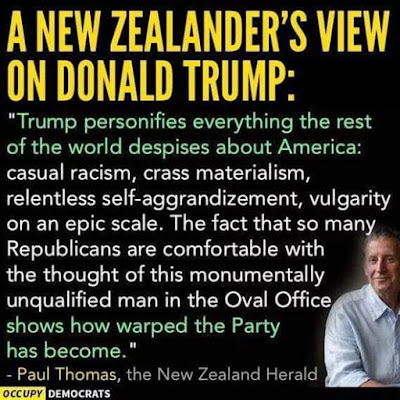 (By the way, in response to “The Donald,” I propose a general strike in this country on Friday 2/10. And I mean EVERYBODY. Any takers?)

To begin, Rachel Maddow brings us the latest on the anti-Trump resistance – I get concerned and I hope the response to the Gropenfuhrer hasn’t peaked too early (as well as the Dems maintaining their collective spine), but somehow I think the fraud and pretender taking up space in An Oval Office will continually generate enough outrage via his utter stupidity and cruelty to continue fanning the metaphorical flames (and is it my imagination, but did I actually see “Holy Joe” Lieberman at DeVos’s hearing?)…

…and Chris Hayes talks with Dem Senator Sheldon Whitehouse of Rhode Island about the crowd’s protest over Whitehouse’s vote to confirm Mike Pompeo to head the C.I.A., though it turns at the end to Neil Gorsuch, nominated by Generalissimo Trump for the SCOTUS – not going to war, so to speak, with Whitehouse over this (though I’m certainly no fan of Pompeo, bought and paid for by the Kochs), but kudos to Whitehouse for endorsing the protests…he should, but it’s nice that he does (by the way, the show from 2/1 led off with great interviews with Steve Schmidt, Rep. Joaquin Castro and David Miliband, but good luck trying to find them on MSNBC’s perpetually wretched web site)…

…and nice work by K.O. to draw the line between Twitter Tantrum Baby and Former Commander Codpiece…

…and Kyle K. tells us about the latest on the Repugs waging economic war on working men and women in this country (something to remember in light of this – NSFW)…

…and, when deciding to protest or not to protest, always remember the title of this song. 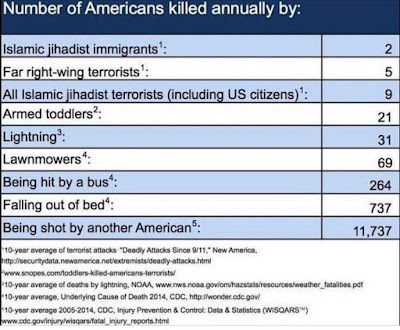 You’ll need to pack a lunch and a half for this, but if Sen. Elizabeth Warren can talk for an hour, the least we can do is watch it for that long – if you want to get a perspective on what Trump’s Muslim ban really means and how utterly ruinous and destructive it is (not just to those trying to get in, but to us overall as a nation), watch all of it…

…and I always believed FDR was our greatest president, and I feel that way even more after watching this clip from Thom Hartmann…

...and Seth Meyers weighs in on the recent stuff in the news concerning President Tiny Hands Big Orange Cheetoh...

…and Cenk and Ana talk about Neil Gorsuch, Fergus Laing’s Supreme Court nominee – I don’t know how nutty this guy is (though this isn’t a pedigree to be proud of as far as I’m concerned), but all I know is his name isn’t Merrick Garland, so…

…and Lee Camp, with humor, does his best to make the thoroughly serious point that the DAPL protests are still ongoing, despite what the tiny-handed, impulse-control-issues lunatic in An Oval Office tries to do…

…and RIP John Wetton of the “super group” Asia, among other “prog rock” bands (that smiling guy creeped me out a bit, and was that actually a Mickey Mouse watch? And thanks – I’m sure I’ll be seeing checkerboard wipes in my nightmares now).

Posted by doomsy at 9:09 AM No comments: 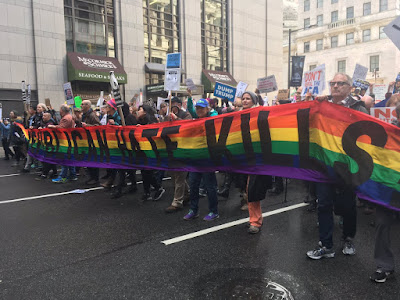 (From here, and a typical wingnut response is here)...

We know K.O. has no trouble bringing the fire, as it were, in these commentaries, but I honestly believe there is some genuine sadness in what he says here, and of course I think he’s right.

There were a lot of reasons why we’re currently stuck with the petulant fraud of a pretender at 1600 Pennsylvania Avenue, and we’ve rehashed them more than a few times already. But more than anyone else, the boomers (and that would include Olbermann and your humble narrator) have our metaphorical fingerprints all over this. And even though I fought this development as hard as I could, I also know that I’m partly responsible… 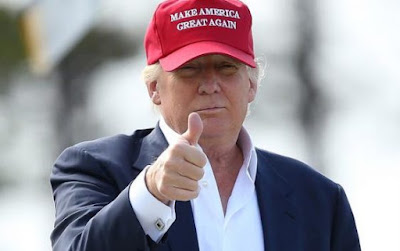 Update: And, inevitably perhaps, it has come to this.

...and as you might have guessed, Trump's ban wouldn't have done a damn thing about this (actually, you could argue that #45 maybe encouraged this behavior indirectly? - and uh, yep)...

Update: As an entity (with the notable exception of Shep Smith), that network is nothing but utterly unrepentant scum (here).

…and Chris Hayes talks to Sen. Sherrod Brown about the Dems filibustering Generalissimo Trump’s SCOTUS nominee (and by the way, I personally don’t have a problem revisiting the Merrick Garland nomination, even though it won’t happen of course...again, not a crime to be rich, but it's just a matter of what you do with it)…

…and given the recent firings, including this (perhaps the ONLY thing that the Gropenfuhrer can actually do well), isn't this interesting, particularly given the person asking the question...


…and in a pretty significant Sessions-related development, good for “Di-Fi” here… 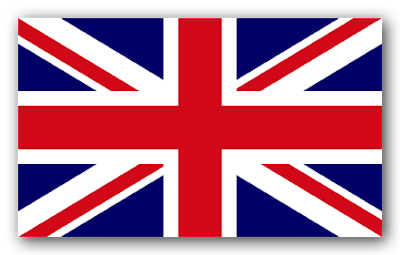 …and thanks to our friends “across the pond” for this – makes me recall this tune. 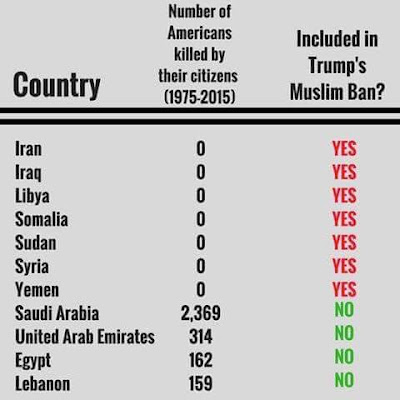 I guess protesting the Gropenfuhrer every weekend is the new normal (this time over his utterly cruel and illegal Muslim ban)...so be it...

To start, John Iadarola of The Young Turks recorded this from LAX yesterday… 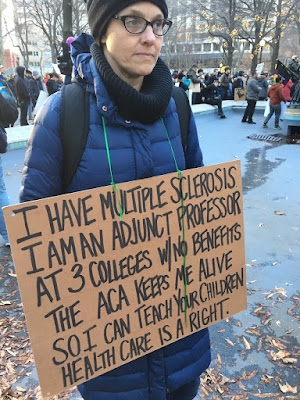 …and with the pic above in mind, here’s an ad that Generalissimo Trump doesn’t want you to see (more here - tomorrow is the sign-up deadline)…

…and there’s a veritable smorgasbord of garbage that comprises the nominees of President Big Orange Cheetoh, but while we quite rightly focus on Jeff Sessions, Betsy DeVos and Rick Perry (OMFG - as far as I'm concerned, trying to put that clown in charge of our nukes is an impeachable offense all by itself), let’s not forget about the character called out in this video too…

...and sticking with Rachel Maddow, here's a particularly important (IMHO) segment on the environment, punctuated somewhat by her "focus" comment at the very end (a few days late, but better than never)...

..and yesterday marked what would have been the 70th birthday of David Byron (nee David Garrick) of the ‘70s prog-rock band Uriah Heep (yeah, I guess this is a bit of a “message” song aimed at you-know-who and his pals; probably best to view this full screen – “this goes to 11,” by the way).