Another terrific corporate media takedown by Jon Stewart here, this time over the McChrystal story (and I failed to comment on this related item from BoBo earlier)...

...and I dedicate this little number to news mannequin Gretchen Carlson of Fix Noise, whose idiocy has been captured for all time by Stewart in the above video.

Something really unbelievable happened today in “left blogostan,” and John Cole of Balloon Juice tells us about it here (h/t Atrios)…

Dave Weigel just resigned. He provided fair and accurate coverage for the Washington Post, but because he said something obnoxious on a private email list after Drudge sent hundreds of screaming wingnuts after him and the DC Examiner printed the name and workplace of his girlfriend, he was forced out. Not because of any of his professional work, but because of a couple intemperate remarks on an allegedly private listserv.

I hope they find out who leaked the emails and his/her career is equally damaged. This is a disgrace.

Actually, as far as I’m concerned, Weigel has grounds to sue, though I have a feeling he’ll be snapped up quickly by some legitimate news organization in the meantime…hope so anyway (and as Keith Olbermann told us tonight on “Countdown,” Tucker Carlson was involved – by the way, Huffington Post called, Tucker; it took a look at “The Daily Caller” and wants its front page back).

And yet again, I would upload the “Countdown” video if MSNBC’s vids weren’t hosed; I’ve contacted them on this and am awaiting a response at the moment.

With Weigel in mind, I thought I’d put up this interview K.O. conducted with him during better times (and I just found this)…

…and I don’t know about you, but I’m more than a little fed up with a certain moose-hunting former Alaska governor who quit halfway through her term making remarks about “real Americans.”

I don’t expect a single-brain-celled organism like Sarah Palin to have understanding enough to realize how hurtful the actions of her political party are to those who are out of work, but assuming anyone else in her party has a functioning synapse or two between their ears, then they should know (I gave up long ago on expecting anyone in the Republican Party to have a conscience...oh, and here is another example from Huckleberry Graham).

So this song goes out to Sarah Palin’s “real Americans” who are getting kicked in the teeth on a daily basis by the Repugs (when those fine folks aren’t getting used as campaign props by Palin and her pals, that is – here, here, and here are related posts).

Update 6/26/10: I thought this was a good post on this subject also ("fun-employment," huh? From Frank Luntz's lips to that idiot's ears, I guess).
Posted by doomsy at 8:02 PM No comments:

Update: Kudos to Murphy for this also. 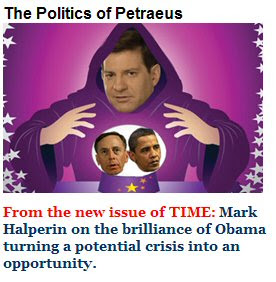 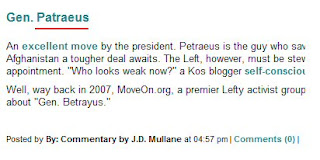 Posted by doomsy at 6:34 PM No comments:

I'm with K.O. on the McChrystal thing - keeping him where he is should automatically shut him up going forward. Otherwise, letting him go will set in motion all of McChrystal's appearances on Fix Noise and conservative-friendly media to launch the inevitable book or a cushy job at the Hoover Institute or some other right-wing think tank (harping against Obama every second, of course).

I say screw him. He supported this mess in the land where empires crumble. Keep him there and let him reap the whirlwind, and for the Pat Tillman thing too (along with the more honorable members of our military, sadly)...

Update: You know, just once I wish someone would acknowledge that DFHs (like myself I suppose) are actually right more than every so often and try listening to us for a change (here).

...and I suppose this is a predicatble selection, but there you are (and no, I don't know what Richard Branson is doing there either).

Ladies and gentlemen, I give you the idiot Phil Gingrey of Georgia, a Repug U.S. House Rep who actually thinks unemployment is funny (below, and here is another brainless moment from this nematode)…

…and this concept is probably too difficult for Gingrey to comprehend, but kids can certainly understand it…

…oh, and by the way, people, there is no excuse for this…

…so Obama isn’t everything we want – so he’s done more than a few things that have actually pissed me off, to tell you the truth; well…

…You want to know what happens when Democrats sit on their hands in an election cycle? 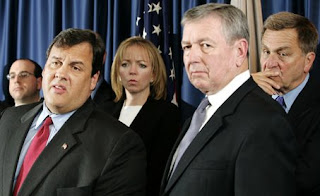 Take a good, long, hard look at what New Jersey is going through right now…

…and here’s a “green” message from the kids (and I like their music also – a little rough at times, but it speaks to another generation, I realize)…

…and speaking of music, I hope this song title isn’t prophetic (getting the munchies from watching this vid, though).

Posted by doomsy at 7:49 PM No comments:

(Part One is here – once again, no posting tomorrow and the rest of the week is TBD).

Oh, and by the way, happy Father's Day (in whatever language)...

...and I believe it's now officially time to play this song (well, it will be tomorrow I mean).

Posted by doomsy at 9:08 AM No comments: