(By the way, @chrislhayes conducted a great interview last night with a surrogate of the 2012 presidential campaign of Willard Mitt Romney about how Trump is supposedly not representative of the Repug Party – I don’t totally buy that of course, but it was still a good interview…no shot of finding it at MSNBC’s horrible web site of course.)

On to the videos...Matt Lauer should be forced to watch the following clip in a non-stop loop for an hour (here); I would argue that the very idea of having “Today” show host Lauer host a presidential candidates debate ensured a mediocre-at-best performance; meanwhile, kudos to Shep Smith once again, dragging Fix Noise correspondent Carl Cameron, among others, into the cold light of day…

…and speaking of Lauer, I thought his stupidity was on display also here in what I also thought was a great answer by HRC to a question about Iran’s nukes – good catch by Sam Seder… 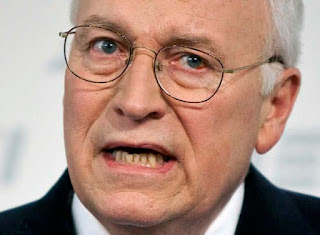 …oh, and speaking of which, remember when “Deadeye Dick” Cheney said the Iran nuke deal was “madness” here? Well, K.O. responded better here than anyone else as far as I’m concerned…yes, time once more for “This Day In Doomsy History” from 9/8/15 (pretty much going “around the block” for this one - and by the way, when it comes to Bushco and GITMO, let's not forget this)…

…and let’s see now, I knew about Florida AG Pam Bondi dumping the Trump U investigation after the campaign donation from “Fergus Laing,” and I knew about the little fundraiser he threw for her, but I didn’t know about the lawsuit between Bondi and the Katrina victim whose dog Bondi wouldn’t give up (here) – a “rising conservative star” indeed…

…and happy belated 70th birthday to Dean Daughtry of the Atlanta Rhythm Section.

Posted by doomsy at 7:39 PM No comments:

I wish I could share the faith that Number 44 shows here in our voters and the Democratic process, but I'm still skeptical on that - I would be more of a believer on that if "The Donald" had been properly called out long ago the way he should have been called out; I'm glad President Obama said this of course, though I wish he had done a better job of holding our corporate media to account here, including this toady (Lauer I mean, whose performance last night was apparently a festival of suck, which I guess shouldn't be surprising)...

…and Seth Meyers takes a look at the latest nonsense with “The Donald” and his Pam Bondi payoff (including this – and I’m sorry, but the stuff with HRC pales by comparison; the Repugs have had all this time to make a legitimate case against her, and all they’ve got is a parade of supposition)…

…and yeah, as I said, I think Colin Kaepernick should stand for the anthem, but once again, he definitely has a point (NSFW)…

...and do you want to hear a slow, torchy Thursday ballad? I hope so, because here it comes.

I think this is exactly what "The Donald" deserves, at a minimum (here)...

…and here’s a heck of a post-Labor Day story; kudos to the Indian workforce responsible for this – all the best…

…and I give you a couple of major music milestones – happy 65th (!) birthday to Chrissie Hynde of The Pretenders of course (with a tune that was allegedly a shot at this guy)…

…and Buddy Holly would have been 80 today.

Yeah, when “Fergus Laing” says that he wants to be Mr. “Unpredictable,” I have a two-word response: Mission Accomplished…

...and hey, idiots of our corporate Beltway courtier media (here) - want to find out about a REAL scandal (here and here)? Watch this clip about how investigations were ongoing into Trump “University” in Texas and Florida before Trump gave donations to Texas AG Ken Paxton and Florida AG Pam Bondi – problem solved!...

Update 9/13/16: And for the benefit of anyone who actually cares, Levin eventually caved (here).

...and gee, maybe we ought to rethink this whole fracking thing, huh? (here)...

…and this is the most benign treatment from our media, that, as far as I’m concerned, Phyllis Schlafly deserves (she actually deserves far worse than this – typically solid reporting by Rachel Maddow...we hear about Schlafly at about 8:00)…

...and Freddie Mercury would have turned 70 yesterday.

Ed Schultz speaks with Leo Gerard, head of the Steelworkers Union, about the threat of the so-called “Right to Work” movement, which is really a euphemism for “right not to get paid a livable wage”…

…and sticking with Ed, he speaks with John Nichols of The Nation about the labor movement overall in this country…

…and John Oliver brings us Labor Day observations as only he can (hey History Channel, thanks for being jerks and yanking the video that was here previously…yeah, I make SO MUCH MONEY doing this, don’t I?)…

…and this is one of my favorite songs about working – not very upbeat I know, but well done by JT.

Posted by doomsy at 7:56 AM No comments: