Thanks to John Amato at Crooks and Liars for this clip (here); to say that Rod Serling had a unique perspective on what you might call “the human condition” is an understatement…

…and on the subject of Trump and demagoguery, I think Bernie Sanders hit the right note, as Thom Hartmann tells us (more here)…

…and there are times when I think we’ll finally come around on the issue of guns, but after watching those anti-Obama Roseburg protestors, I’m not sure that this country will ever learn (here)…

…and RIP Natalie Cole, who I’m sure is with her dad again at long last.

Posted by doomsy at 2:08 PM No comments:

Yeah, the “party of Lincoln” sure learned from that “autopsy” after Willard Mitt Romney lost in 2012, didn’t they – uh huh…

…and isn’t it great to see how our ol’ buddy Vlad Putin is supposedly helping us in Syria – for my money, he’s a bigger butcher than Assad…

…and hey, don’t look now, but the Iraqi Army did something right; the real culprits though, as far as I’m concerned, are the uncharged criminals in this country behind Iraq War II who created the whole damn mess in the first place; now all the Iraqis have to do is hold the ground…good luck…

…and I give you Media Matters’ choices for the worst Islamophobia of 2015 here (and if you guessed that most of it has to do with Fix Noise, then you win a free autographed copy of Billo’s book on The Sainted Ronnie R – and yes, that’s a joke, such as it is)… 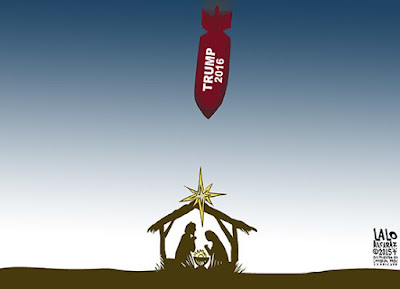 …and I think this describes the consequences pretty well (nice work by “The Donald” and his pals on this) – nah, those awful words and sentiments don’t have an impact; not much…U-S-A! U-S-A! U-S-A!...

…and here are the final tunes for the year – the way Scott Weiland left us was tragic, of course, but to me, that doesn’t mean that we shouldn’t hear from him one more time…

…and this song kind of embodies my hope starting at about 12:01 AM EST…

…and in keeping with recognizing the birthday of Patti Smith, I want to play this tune once more to end the year…never, EVER forget every word of it; best wishes for a happy and healthy (and Democratic!) 2016.

Posted by doomsy at 3:32 PM No comments:

Fortunately, karoli wrote a great commentary here to this woman, because otherwise people like her are totally beneath my contempt and don’t deserve a response.

You want to know why our planet continues to melt, our infrastructure continues to crumble, our economy cannot rev up and create jobs the way it’s supposed to, we can't get anywhere on common-sense gun control measures or immigration reform, and our government is basically incapable of doing anything anymore except creating and perpetuating the freak show that enables Republican politicians and presidential candidates and doesn’t do much of anything else?

It’s exactly because of people like this woman. Low-information idiot voters who watch Fix Noise, listen to right-wing radio and either don’t bother to vote or, if they do, dutifully elect Republicans who do absolutely nothing but steal from them. And unfortunately, these people comprise just enough of the population to block the rest of us from accomplishing anything constructive.

Take your bigotry and go parade it somewhere else…

...and I think it’s unintentionally hilarious that the life forms who want a federal database of Muslims recoil in horror when the same thing is proposed for guns, which would actually help (hate to say this, but we’d better get used to the very real possibility that Trump will actually win the Republican nomination, which is appalling but not surprising considering the rest of that utterly sorry field in his party)…

…and given the continued warmth we’ve been having in these parts (as well as the wild weather elsewhere), comparatively speaking, I think it’s time to revisit “This Day In Doomsy History” from 12/29/10 – Reese Halter talks to Sam Seder on “Countdown” about climate change (love the map - a few ads in the beginning…and by the way, there’s a bit of a “Star Wars” goof by Rachel Maddow at the very end if you watch the whole thing)…

…and yes, this is an awful story, but I think Karamo Brown is right to claim that there’s no simple way to analyze it without looking at a lot of other factors (under-staffing, working long hours, patients with no insurance, etc.)…

...and to me, the TPP isn't worth a hill of proverbial beans, but this is progress anyway...

...and I would say that this is a timely question.

Yeah, this is pretty awful all right - if nothing else (and this is a poor substitute for charges, I'll admit, which should have been filed against the two officers - more here), this should force all of those damn Airsoft guns off the market once and for all...

…and somehow, I don’t think you’re going to hear about this on Fix Noise…

…and this may be the best cover of a Black Sabbath song that I’ve ever heard.

RIP Meadowlark Lemon; maybe a bit too much "minstrelsy," if you will, but you know what? He was talented and he made people laugh - not much else to think about as far as I'm concerned...

...and this story is about a human tragedy first and foremost, and all efforts should be made to help those affected by the hellacious weather in the South (here). However, I believe this is a factor also…

…and in a somewhat related vein, apparently USA Today has a series on what is happening to our global groundwater (here) – important stuff…

…and here’s a neat little tune I stumbled upon while I was busy doing my holiday music thing.