Uh, yeah, President Hopey Changey – this about says it as far as I'm concerned...

...as does this concerning that misogynist moron Stephen A. Smith (here); K.O. has a much smaller shout box than he used to have, and he's a lot more regulated – that, sadly, is what happens when you speak truth to stoo-pid – but that doesn't mean that he doesn't still have something important to say once in awhile (here)...

Update 7/30/14: Not for a minute will I defend what Smith said, but I think this sets a worrisome precedent - if Fix Noise, for example, applied this standard, Flush Limbore would be suspended every day (oh, wait...).

...and remember when Gramps McCain was praising Bernie Sanders on the VA issue? Yep, “Senator Honor and Virtue” and his pals were just looking for an excuse for more cheap political BS (love to be proved wrong)...

…and I like the harmonies on this tune, something a little lite and airy for these still-summer days.

Posted by doomsy at 8:02 PM No comments:

I cannot possible imagine how else to respond to this atrocity, except to put up this video once more (though, actually, 91u1iani is right, but not in the way he imagines)…

...and switching the mood a bit with a purpose, I give you this (NSFW at the end; Mary Poppins was the very first movie I ever saw in a theater - awwwwww)...


Mary Poppins Quits with Kristen Bell from Funny Or Die
...and I give you the latest in the pathetic annals of U.S. House Repug non-governance (yeah, sure, go ahead with your idiotic lawsuit)...

...and I can pretty much take or leave this guy anymore, but I like this tune.

I think this is a good question too, and somehow I'm sure Sen. Mr. Elaine Chao doesn't have an answer...

…and I think Cenk is particularly spot-on in the last 5-7 seconds of this commentary about how Number 44 is supposedly using world turmoil as part of some imaginary political scheme at home (ZOMG OBAMA BILL AYRES SOLYNDRA LOIS LERNER IRS BIRTH CERTIFICATE BENGHAZI!!!!)…

...and here's a seasonal tune for all of those aging "boomers" out there :-).

Posted by doomsy at 7:46 PM No comments:

Rachel Maddow tells us about how Gov. “Goodhair” Perry of Texas is supposedly handling the immigrant crisis, as opposed to Gov. Deval Patrick of Massachusetts (another blue-state triumph IMHO)…

...and Joy Reid tells us about another poor person in this country supposedly living the high life in Jan Brewer-land (snark mode off)...

...and on this day 10 years ago, the 9/11 Commission issued a report saying America's leaders failed to grasp the gravity of terrorist threats before the 9/11 attacks (yeah, I know – duuuh!)... 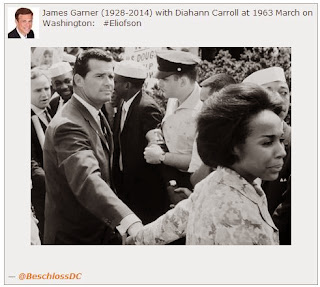 ...and I'm not sure how much of this is serious commentary vs. comedy, but kudos to John Oliver for taking on a taboo subject...

...and for a report on what often happens with law enforcement before sentencing, Bill Maher (fresh from this idiocy - never an excuse for misogyny) weighs in here...

...and I think we're going to be reminded again in these parts of what time of year it is shortly (somewhat NSFW).