Here’s Cenk’s take on the latest bit of right-wing outrage; it really tells you how much they’re on the outside looking in, as it were, when the best they can do is work themselves into a lather over a “tweet” about a cereal ad (and yep, it is truly lame for MSNBC and Phil Griffin to so utterly cave – and once again, check out the unintentionally hilarious captions)…

…and I suppose I shouldn’t be surprised about this development with the Keystone XL Pipeline, which to me is several time bombs waiting to detonate at least, making me recall this NSFW video – and by the way, it really won’t create that many jobs…

…and I hope Governor Bully didn’t decide to measure for drapes in the Oval Office (Christie still denies, of course – he’ll be lucky if he finishes his term)…

…and this song really hits me where I live anymore.

Posted by doomsy at 9:05 PM No comments:

Good stuff here by Jon Stewart about the Congressional Repugs and their hurt widdle feelins over that big, baaad Obama and the State of the Union address (but watch that Philly stuff, even though we talk smack too from time to time :-)...

..and here is a special report on the climate crisis that you can run by your batshit-crazy “Fix Noise”-watching family member the next time he or she says “oh yeah, global warming, hardy har – it was 15 degrees for a low last night”…

…and I’m going to miss Henry Waxman exactly because of moments like this (here) – here, he grills former Bushie (and one-time EPA head) Stephen Johnson because Johnson basically refuses to answer (with smug indifference, typical for our prior ruling cabal) three simple questions about conversations with Former President Nutball and his henchmen (and how ridiculous is it to see Darrell Issa pretending to care about order and procedure when he has since made a mockery of the Oversight Committee under his odious chairmanship - this is a positive development, though)…

Update 1/31/14: This tells us more about Waxman's legacy, which was extraordinary indeed, particularly on the environment.

...and I’m not making any bones about it – I need some more current videos here (get it, bones?).

Posted by doomsy at 2:27 PM No comments:

OK, I was a bit too dismissive of the State of the Union address last night, I’ll admit – however, it sounds like I didn’t miss anything from “the loyal opposition,” as Cenk Uygur tells us here (I think this starts a play list, just so you know)…

…oh, and here are the commendable highlights from Number 44…

…besides, if anyone out there needs a reminder of how much President Obama “stands up” on occasions like this, as opposed to his ruinous predecessor – well, here is an unpleasant stroll, if you will, through recent history (I’ve always said that the 2003 State of the Union address was one of the most grotesque examples of wall-to-wall lies ever seen, and I stand by that completely...try not to retch as you listen to the reasonable explanation from Peter Mathews that turned out to be almost completely true)…

…and the clip of Pete Seeger that I included last night wasn’t bad, but I thought it would be better to include one from his heyday if you will – check out the parts where he speaks and continues to play the banjo with one hand.

Sorry, but I really don’t care a lot about a certain speech tonight – I care about how real people are affected by real decisions by real (and often, real bad) politicians, and Rachel Maddow tells us here about the two cretins primarily responsible for our sorry political state in this country (nice touch of controlled outrage at the end as far as I’m concerned, which is totally justified)…

…and leave it to Jon Stewart to give Sean Inanity the treatment he deserves for being the petty, whining little brat that he is when all is said and done (here)… 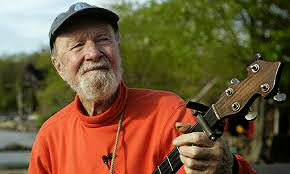 …and I liked this selection in particular because it showed his ability to involve his audience – God rest him.

I really do try to ignore the right-wing bloviators, mainly because they remain what they always have been, and that would be total idiots; fortunately, Bill Maher is “on the beat” here with a certain sweet-singing, pot-smoking musical legend (yep, NSFW again)…

…and if anyone in Kentucky watches this clip and somehow votes to send Sen. Mr. Elaine Chao back to the U.S. Senate anyway this year – well, I can’t think of a word for that kind of stupidity and heartlessness…

…and happy birthday to K.O., gone from politics but definitely not forgotten…of all the “Special Comments” and other great reporting, I thought this was definitely near the top of the list…

…and here is today’s regional weather forecast (and gee, that Willie Nelson sure gets around, doesn’t he?).