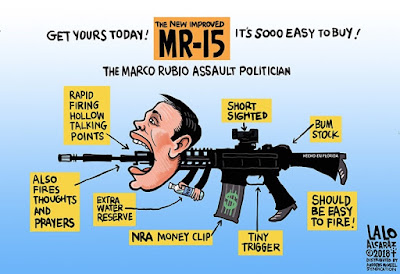 Aw, let’s shed some crocodile tears for poor widdle Marco – those big, bad high school students who lived through another mass gun slaughter in this country have the nerve to be mean to him, apparently…

…and Repug U.S. House Rep Don Young of Alaska tells us that the Holocaust might have been prevented if only the Jews had had guns – why is this human mistake still taking up space in Congress (more Young idiocy is here, and to do something about him, click here…yeah, nice to have your goon standing in the back of the meeting yelling “Amen” on cue and telling the Dem to shut up…typical)…

This congressman just argued for guns by saying that Jews could have survived the Holocaust if they were armed pic.twitter.com/jxVUBYfvD7


...and despite its many members who actually do the right thing when it comes to guns, I always thought the NRA, as an organization, is something out of a comic book, and I would say that this proves it (and Rosie O'Donnell - heh)...

The NRA made its own insane graphic novel where gun owners fight off 'enemies of freedom' pic.twitter.com/X6DlIgmsd1


...and there are so many damn Trumpster scandals raging that it's hard to keep up with all of them, but I don't think we should lose sight of this one either...

Ryan Zinke took control of the @Interior Department one year ago this week. It’s amazing how much damage he has tried to inflict on our public lands—repealing climate protections, inviting polluters into pristine wilderness, and reopening loopholes to benefit the coal industry. pic.twitter.com/s2h4IHNBl3


…and oh look, it’s “Saint Orrin” Hatch saying here that “stupid(est), dumbass” people support the ACA…just grab a fistful of Valium, suck it down with some Scotch and go collapse into a corner somewhere, OK?…

In this critical election year, we can't succumb to cynicism or put our heads in the sand. We must fight with everything we've got to reclaim our democracy. pic.twitter.com/H1DtRPVVXj


…and as I noted yesterday, the tinsel town awards are this Sunday, so here is a tune for the occasion.

Posted by doomsy at 8:10 AM No comments:

Yeah, it tells you something when yesterday’s punch lines become today’s “trending topics” or click bait of a sort because of rampant “both siderism” in our corporate media primarily, with a significant assist from the wingnutosphere, as Chris Hayes points out…

…and in a typical bullshit Trumpster move, it looks like the head of the National Park Service, Dan Smith, isn’t going to allow the March 24th student protest in DC (here); as noted here, Smith once cleared about 130 30-to-40-foot trees around Redskins’ owner Dan Snyder’s house so Snyder could get a better view of the Potomac River (hard to tell who is the bigger assclown here – the captions fly by a bit too fast here; the video is basically over at about 4:00...another reason to hope for the Redskins to utterly suck this year)…

…even though what the students are protesting for is some sanity in what passes for our gun laws in this country, something the all-time hero of the wingnuts once called for here…


…and this is, without a doubt, one of the best gun commentaries I’ve ever heard from someone who “walked the walk” for this country; every time you hear someone say “oh, it isn’t about guns, it’s about mental health,” show them this video – IT’S ABOUT BOTH, AND A WHOLE HELL OF A LOT MORE BESIDES!!...

Our producer Mike is a Marine Corps veteran who says there's no reason for a civilian to own an assault-style weapon that's meant only to kill pic.twitter.com/vI5kToh2GZ


…and switching things up again a bit, I think our corporate media has come down with yet another case of “shiny object” syndrome on this whole business with Hope Hicks; I think that’s enough of a setup for this parody video (which reminds me that the Oscars are this Sunday – heh)…


...and given the wording noted here based on a quote from her, I had this tune in mind.

Posted by doomsy at 2:16 PM No comments: 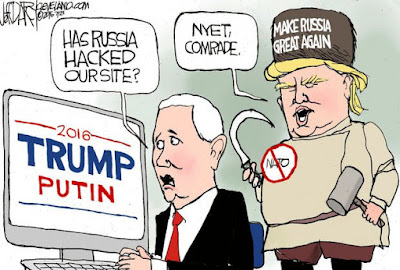 Yeah, it sounds to me like the Russkies are going to try and build on the chaos they created in 2016 for the fall elections and beyond (more here – rerunning this segment from a couple of weeks ago as a refresher)…

…and I was impressed with Andrew Gillum for standing up to wingnut Richard Corcoran over the latter’s “sanctuary cities” nonsense, with Corcoran favoring “detention cities” apparently, and here, Gillum stands up to the NRA; he’d definitely earn my vote if I could cast one in the “gun shine” state (hey, DNC Beltway idiots and perennial election LOSERS, pay attention to what a REAL Dem sounds like!)…


…and Former Clinton Labor Secretary Robert Reich reminds us what is wrong with so-called “Right to Work” laws given this story, in which the utterly vile miscreants of ALEC, most infamously Chucky and Davey Koch, are BAAACK to try and erode workers’ rights even more (more here)…

#JanusvAFSCME is another thinly veiled attempt to destroy unions under the guise of "Right to Work." The truth is workers in so-called "right to work" states receive lower pay, are less likely to have health care, and pay more out of pocket for insurance. pic.twitter.com/KyL2AKMCEd


…and it looks like Uday Trump, Jr. haz a sad over the unhappiness of Americans in Dickensian circumstances, wishing they would “smile” like they do in India I suppose (not a self-reflective molecule in Jr.’s entirely wretched person, apparently)…

…and yeah, you know it, you love it (well, maybe), so here’s another installment of “This Day In Doomsy History” from 2/28/14, in which the fifth anniversary of the founding of the Teahadists was commemorated, if you could call it that, with accompaniment from the funniest math professor of all time (something to note in light of this in particular)…

…and as long as I’m on the subject of race a bit, I guess, since February is about to end, I’d better hurry up and say something about Black History Month, which, to be honest, I always thought was a dumb idea, and not because the contributions of African Americans shouldn’t be recognized and celebrated all through the year and not just in this month alone – they should – but also because, pointy headed liberal that I am, I think we should be at a point in this country where we respect and appreciate everyone from ALL races, ethnicities and gender preferences, to the point where we don’t need to designate a month for anyone in particular.

Well, with that admittedly long-winded intro out of the way, I give you this tune for the occasion; yes, the legendary vocals of Levi Stubbs is the most prominent takeaway here (along with a little Dylan phrasing thrown in, which was a big deal back then – and the lip sync is off of course), but as you listen, I would also ask that you pay attention to the bass lines of esteemed Motown “Funk Brother” James Jamerson, a man who received the well-deserved acclaim posthumously that he should have received while he was still with us. 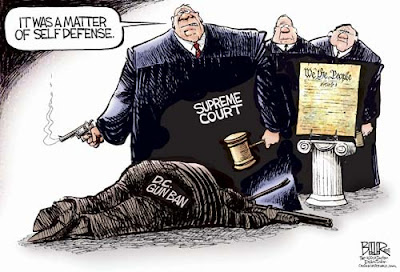 Ari Melber (who is a lawyer, by the way) tells us that the High Court of Hangin’ Judge JR has ruled on handguns covered under that twisted interpretation of the 2nd Amendment, but not AR-15s…

…and speaking of guns, Farron Cousins gives us an NSFW commentary on the church that blesses guns in our beloved commonwealth (more here…and gosh, didn't a certain 44th president once say that people cling to their guns and religion in this country, and he was met with a raft of shit in response?)…

…and Seth Meyers brings us up to date on the Gropenfuhrer’s latest idiocy on this subject (once again, a pox on anyone who had anything whatsoever to do with inflicting this utter train wreck of a presidency on this country)…

…and Rachel Maddow, speaking with Oregon Gov. Kate Brown, tells us that they have closed the loophole in that state that allowed someone convicted of stalking and domestic violence or under restraining orders to buy or own firearms and ammunition (well done)…

…and speaking of teachers (as Seth Meyers was), kudos to those in West Virginia, as TYT’s Emma Vigeland explains (and a one percent pay raise? GMAFB!)…

…and I don’t know much about this guy, but kudos to him; awesome sound – hope he keeps himself together and has a long, successful career.

Posted by doomsy at 2:39 PM No comments: 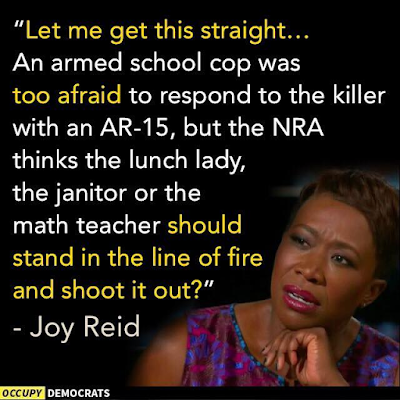 …and speaking of guns, yeah, I think this is a pretty damn absurd ad too (Mr. Syrupy Smooth Talker and his pals are playing those poor, deluded gun nut saps like a rusty fiddle)…

…and Mike Papantonio and Peter Mougey discuss the recent move by The Supremes to turn away a constitutional challenge by the guns nuts to a 10-day waiting period (doing the right thing for once, though you can rely on “Almost Silent Clarence” Thomas to get it wrong)…

...and I give the Dems an "A" for effort on this (though, while Clinton made a big mistake, I'll never say that he "deserved what he got"...and with all due respect to Cousins, the "alt-righters" will never believe the women anyway)...

...though I also wish a pox on the Dems’ Beltway media/political/industrial complex for this (from the same geniuses who said Katie McGinty should run in 2016 against "No Corporate Tax" Pat Toomey instead of Joe Sestak, who very nearly beat Toomey in a Repug wave election in 2010 - yeah, I know, "horseshoes and hand grenades"...)...

Update: Oh, and by the way, as long as I’m including a Young Turks video, I also want to point out something. Yes, they’re allowed to support Alison Hartson if they want in a primary against Dianne Feinstein, but I think it’s wrong for the state’s Dem party not to give Feinstein their endorsement (here). Yes, Di-Fi has cast some bad votes, but to me, 25 years of constituent service, including overcoming health issues that would have led to long-term hospitalization for most of us, should count for something.

Update 2/27/18: And the next time the "base" decides to sit on its metaphorical hands instead of voting (never an excuse to not vote, though), just don't be surprised.