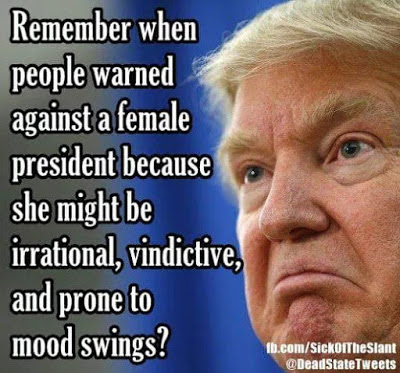 Lawrence O’Donnell “goes there” on the “Trumpster” Syrian attack, with David Corn, Rick Wilson, and Indira Lakshmanan (Trump has “the attention span of a gnat on meth”…good one by Wilson…and by the way)…

…and it looks like the tourism biz is down BIGLY! under the “Gropenfuhrer” (color me shocked – not)…

…and despite everything, let’s not forget that this is the weekend, after all.

Posted by doomsy at 9:55 AM No comments: 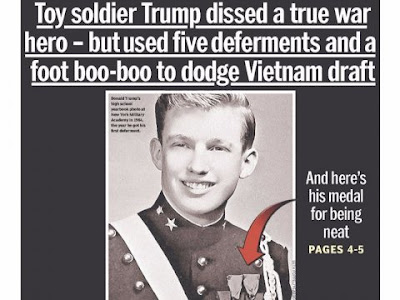 I think it’s time for some hand-wringing over all of the stuff with the “Gropenfuhrer” and the Syria missile strike.

As much as it pains me to do this (and it truly does), I’m going to give President Big Orange Cheetoh a bit – but just a bit – of leeway on this. Yes, I’m extending something to him that NEVER would have been extended from Republicans to Hillary Clinton (they probably would have formed about half a dozen “oversight”-related committees in response to look into it), but at a time like this, I think we’re supposed to support the president (or, as perhaps their leading icon exalted by them to almost god-like status once put it, “trust but verify”).

But we should never forget what Trump is. Nor should we forget how he got there. And the fact that he SHOULDN'T EVEN BE THERE STILL.

And it’s EASY to blow stuff up. The REAL test will comes when Assad inevitably responds (he’s one of the worst butchers of our age, but he’s not stupid either), and we’ll see what Fergus Laing and his minions do THEN.

Update: So much for the leeway (here).

…and yeah, I guess this is about par for the course, as they say, for Brian “Iraqi Helicopter” Williams (more here, and I honestly thought Fareed Zakaria knew better…more fool me, I guess)…

Turns out all it took for Trump to win back the love of the mainstream media is launch a couple tomahawk missiles pic.twitter.com/i4wKAIJuyh


…and while I think Generalissimo Trump most definitely has corporate media enablers, Bill Maher recently commented pretty expertly IMHO on the miscreants who populate the cabinet of Number 45 and “fluff” him pretty regularly (and did anyone besides me notice, by the way, that the title of every one of Maher’s “New Rules” was a takeoff on a Beatles’ song? And NSFW - here)…

…and speaking of the “Trumpsters,” I thought this was pretty clever…

Sean Spicer treats the WH press corps like a bunch of kindergarteners pic.twitter.com/skjUKe4lJK


...and speaking of kids, I thought Ahh-nold found the proverbial nut here...

'That's not how you make America great, by taking $1.2 billion away from the children.' – Arnold has had enough of Trump's budget cuts pic.twitter.com/Sz8lBvtHnu


…and you’d better believe that this issue affects kids too (oh, and by the way, about that supposedly adorable guy in the red sweater – here)…

Climate change is among the greatest dangers the world faces. How long did ABC, CBS, NBC, & Fox spend covering it in 2016?


…and kudos to Seth Meyers for his treatment of Fix Noise here, including Billo and his “best bud” in An Oval Office (speaking of corporate media sycophants, alluding to Brian Williams earlier…more here and a "golden oldie" is here)…

…and when it comes to “Donald Drumpf” and the Syria stuff, I couldn’t help but think of this song (context may be off a bit, but close enough for me).

Posted by doomsy at 3:51 PM No comments: 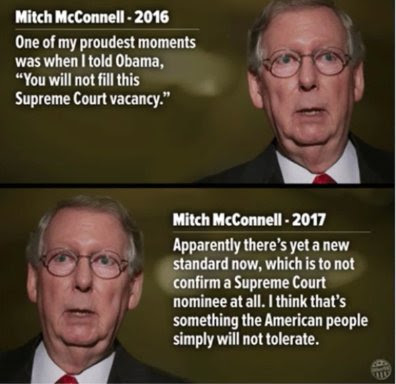 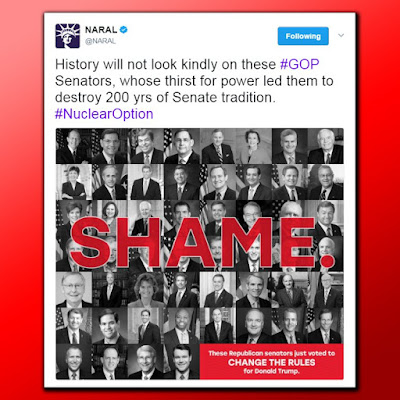 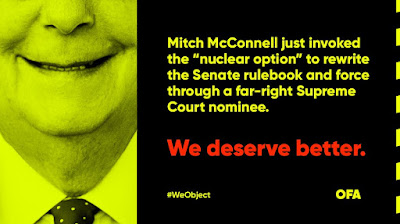 Yeah, I think this says it – once more (I guess for nostalgia at this point), I give you Tweety (here...kudos to the Dems, though, for putting up the fight over this that they were supposed to - not much else you can do when the majority of the voters of this country, in their disastrous, mind-numbing stupidity, decide to give all of the reins of power to movement conservative Republicans)…

…and speaking of mind-numbing stupidity, this tells us about the “extreme vetting” for those visiting this country and returning from overseas travel proposed by the regime of Generalissimo Trump…

…and K.O. gives us a bit of a history lesson on John Dean’s Watergate past and compares it to the antics of registered foreign lobbyist and former NSA member Michael Flynn trying to get immunity; I would buy into what Olbermann is telling us here if the Repug congressional “leadership” were smart enough to figure out that they don’t need immunity for Flynn to get Fergus Laing out of 1600 Pennsylvania Avenue, but I don’t think they know enough to grasp that – I’m wondering if they know enough to find their own metaphorical rear ends with both hands (love to be wrong)…

...and yeah, that stinky Obama sure wasted a lot of time playing golf, didn't he?...

...and boy, there sure are some snowflakes in Minnesota aren't there, and I'm not talking about the weather (but state house Repug Rep Rob Dettmer in particular, along with Greg Davids, noted here)...

White men were playing cards when women of color were speaking on the House floor – then this woman called them out. pic.twitter.com/QA7vOgSvOL


…and it looks like Alabama Repug Gov. Robert Bentley is going DOOOWWWWNNNN, which is quite a feat given that Repugs run the whole damn state (“the devil fools with the best-laid plans,” as the song reminds us)…

…and somehow, I have a feeling that this is one way that Don Rickles would want to be remembered (I could use a laugh after the Gorsuch garbage)…

...and speaking of passings, RIP to Rosie Hamlin. 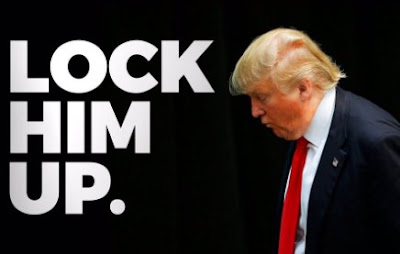 Rachel Maddow tells us how the “Gropenfuhrer” is going to stage these utterly ridiculous photo-ops and carry forward with his REAL agenda behind closed doors, which should shock absolutely no one paying attention to this stuff (including escalating our military involvement in Syria, by the way…kudos to all of you idiots who helped get Big Orange Cheetoh elected, who will do nothing about the gas attacks in that country from the criminal regime in charge and thus make us more at risk for terrorism from the people who actually survive this stuff)…

…and K.O. is back with the next-to-latest in his “Resistance” series; I never thought too much of the “meta data” angle to all of this – and what kind of money was at stake, to say nothing of political influence – but fortunately, Olbermann did…

…and Chris Hayes talks to Dem U.S. Senator Maggie Hassan from New Hampshire about the latest idiocy from our Tiny-Handed Egomaniac-In-Chief on drug addiction, trying to gut treatment funding from the ACA (and I couldn’t track down the beginning of this clip that tells us that Soon-To-Be-Gone-At-Long-Last Governor Bully of NJ was given some kind of a title signifying responsibility in this matter, though of course I’m sure all he’ll do is go fetch fast food for himself and Generalissimo Trump)…

…and speaking of drugs, John Oliver brings us a fairly comprehensive report on the state of pot in this country (NSFW)…

…and as they are with just about everything else, California is blazing a trail on this issue…

Here's how California is protecting its legal weed from the Trump administration pic.twitter.com/72bcxRA3Zh

Posted by doomsy at 1:50 PM No comments: 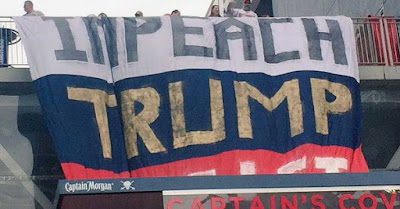 (Definitely not a ‘Nats fan, but nice work here I must say – from Jason Charter on Twitter…)

Chris Hayes talks with Richard Painter, ethics lawyer under Dubya, about all the ways that Number 45 and his regime are breaking the law (and here is more on that “left-wing blog” Pro Publica)…

…and Kyle K. tells us the latest about those cretins at the “Center for Medical Progress” (NSFW)…

...and yeah, I would also say that satirists have figured out how to treat the "Gropenfuhrer" (here – it’s funny, but the reason why the “Trumpsters” are pulling this garbage definitely isn’t of course…NSFW also)…

Satirists know how to cover genuine bullshit. The news media, by and large, doesn't. pic.twitter.com/OmwowfPHaq


…including Tina Fey – the fact that 44 percent of college-educated women actually voted for Fergus Laing is, to me, partly a comment on the unbelievable ineptitude of the Hillary Clinton campaign; of course, it’s also a testimony to all of the Russia hacking, social media garbage and FBI criminality too IMHO…

Dear white women, Tina Fey has a message for you pic.twitter.com/PCVi8QxnXB


…and wow, is Oklahoma Repug U.S. House Rep Markwayne Mullin a snowflake for this, or what – all kerfuffled over a red card (and I find it appalling too, but for a completely different reason)...

This woman was kicked out of a town hall with her Congressman for holding up a piece of paper pic.twitter.com/yp5UnbQVjs

…and there are certain songs I play on certain dates for a reason, and this is one of them. 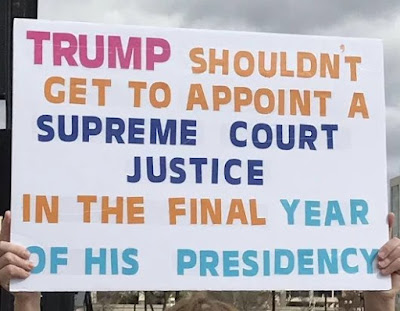 (The screen shot is a nod to this latest garbage from Sen. Mr. Elaine Chao, by the way.)

Rachel Maddow talks with Clinton Watts, former FBI special agent, on campaign coordination between the Big Orange Cheetoh and his minions with Russian propaganda in the 2016 election (more here)…

..and Sen. Al Franken proposes some great legislation here to fight the drug company bastards – doesn’t stand the proverbial snowball’s chance in hell without a Democratic congress, though…


…and speaking of hell (from a heat perspective anyway), apparently this passes for a scientific congressional gathering in the era of Generalissimo Trump…

This scientist has had enough with climate change denial bullsh*t pic.twitter.com/pzMqrS8mhy


…and kudos to the city of Seattle and Mayor Ed Murray for this; the whole “sanctuary cities” conservative talking point is bullshit and should be called out for what it is as forcefully as possible – it’s another non-issue from a right-wing think tank meant to scare white people and intimidate non-white people (here - more here)…

…and this is how change starts to happen, with people such as Heather calling into Thom Hartmann and saying she’s going to be a precinct committee person in Maricopa County, AZ…

…and happy 68th birthday to RT (definitely not the Putin Propaganda Network – and this is the only version of this song that you will ever hear at this blog, from “1000 Years Of Popular Music”).