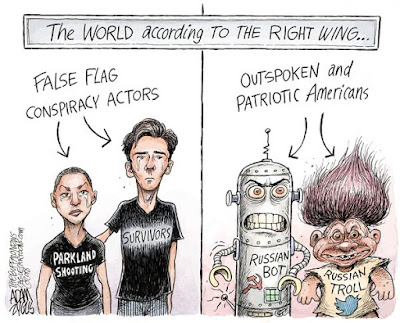 Cenk of TYT talks about the response of “little Marco,” among others, when confronted with the survivors of the Parkland, FL mass shooting (utterly beneath contempt – everyone but the kids, basically, including Anderson Cooper who told Sen. Bill Nelson he didn’t have to answer the question, or whatever…the fact that Nelson was sympathetic I’m sure doesn’t excuse Cooper’s cowardly move to let Nelson off the hook; facing angry constituents comes with the job when you’re a pol, something that Cooper, a member of our courtier Beltway corporate media, has apparently forgotten)…

…and “crisis actors”? I have a two-word response to a comment like that, and that response isn’t “happy birthday”…

If you come for teen survivors of a mass shooting with conspiracy theories about crisis actors, be prepared to get trolled right back pic.twitter.com/a2l1Wgz9sQ


…and God, “Joe Scar” actually found the proverbial nut on the Parkland shooting, in terms of who does better financially, though, of course, he had to play his cutesy BS with Mika-Scar at the end (my response to this…more here and here)…

…and brace yourselves; I know this will be a shock, but the Trump & Congressional Repug tax cuts are probably not helping your paycheck, according to David Pakman (only 37 percent of voters have seen their income increase – good for Amazon, though, apparently; them that’s got shall get of course…)…

…and Rachel Maddow tells us about “blue” state governors sharing gun background check data (NY, CT, RI and NJ – can PA be far behind, I hope? And Cuomo has been a bad actor at other times, but I think he deserves kudos here, especially in the last minute)…

…and for anyone out there with the Showtime premium cable TV network, I highly recommend another great documentary from that channel, and that’s “Eric Clapton: Life in 12 Bars,” which gets into a lot of personal detail including the awful way he was treated by his mother, his deep friendship with Jimi Hendrix and his even deeper relationship with Pattie Boyd…we all knew she was the inspiration for “Layla,” but really she was that for the entire Derek and the Dominoes album, which included this great tune among so many others.

Posted by doomsy at 2:44 PM No comments: 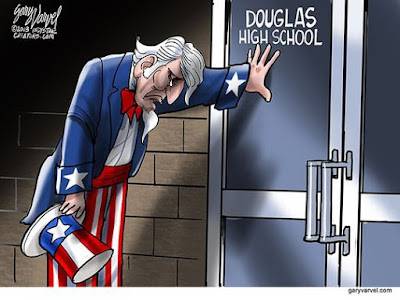 …and Stephanie Ruhle tells us about someone named Levi Patterson raffling off an AR-15 (and no, I don’t think it’s that damn hard to understand the disagreement – remind me never to visit Neosho, Missouri)…

…and this is a couple of days old from Lawrence O’Donnell, but it’s too important not to include here…

…and FINALLY!, a Democrat stands tall in response to all of the Repug “sanctuary cities” garbage out there, and that's Andrew Gillum; as far as I’m concerned, if Repugs want to pass “show us your papers” laws all over the country, then that would turn these places into “detention” cities then, wouldn’t it (try finding a clue on the messaging for once, OK Dems?)…

This extremely racist ad is causing controversy in Florida pic.twitter.com/ETfB9jpKuC


…and here’s another great way to effect political change…

So you want to change America? Start with state legislatures! pic.twitter.com/3C0tsAaB37


…and given all of the stuff in the news, this may be a tongue-in-cheek selection, but I still think it rocks, so here it is; I led off with Kimmel, so I might as well finish with him (love the trippy camera effects at about 2:45).

Posted by doomsy at 4:19 PM No comments: 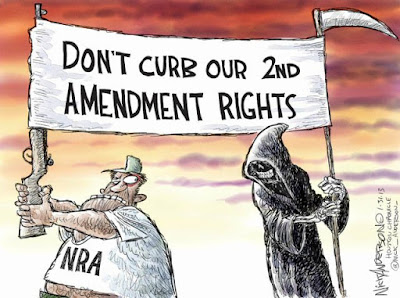 Stephen Colbert mutes the humor, and rightly so, in light of the Parkland, FL shootings…

…and apparently, Rachel Maddow contacted the U.S. State Dept. about Russian sanctions, and they suggested asking Russia about U.S. State Dept. business…gee, I guess that just about makes it official, huh (Update: They later denied the GRU guy was even here - as we know, this bunch is so trustworthy, so of course I believe that - snark)…

…and once in a while, The Moustache of Understanding finds the proverbial nut (and “shame”? We’re talking about the Gropenfuhrer and his wretched party, let’s not forget)…

…and I’m not in the least surprised by this…

…oh, and before we shed a tear for Billy Graham, I would ask that you keep the following in mind; this call with Number 37 took place in April 1971 (more context is here and here)…

…and yeah, I guess this tune applies to Graham and other notables, in a certain context I suppose. 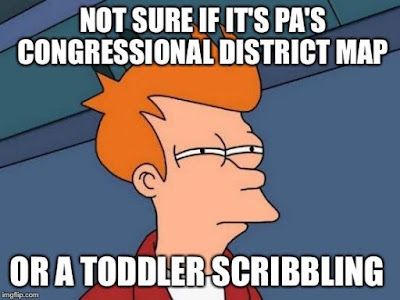 Ali Velshi talks with author David Daley and tells us more on PA’s utterly gerrymandered map of voting districts and the PA Supreme Court’s decision to redraw our entire commonwealth (and why is this utterly predictable?)…

…and Rachel Maddow tells us the tale of Charlotte Fedders, someone who is truly heroic in my book for defending herself not just against her monstrously abusive ex-husband, but also for coming to the side of Lisa Fiertein, victimized under similar circumstances by one-time Trump Labor Dept. Head nominee Andy Puzder…

…and in case anything thinks I’m ready to move on from the latest mass shooting, this time in Parkland, FL, I can assure that I’m not; when I hear the phrase "I'm a firm believer in the Second Amendment," I want to vomit in my mouth, but I still think this guy deserves credit for this...

This proud gun owner loved his AR-15. Watch him destroy it. pic.twitter.com/VFvtaBV3Nk


…and in a similarly tragic vein, I give you another installment of “This Day In Doomsy History” (again, more or less), from 2/23/11, in which Dr. Robert Cowie courageously shared the horrific loss of his daughter Ashley at the hands of a drunken, drugged-up fool with an AK-74 weapon of mass death (more here)…

…and I liked the video that Rachel Reddick put up a little while ago, but this is damn impressive too from Scott Wallace (and a hell of a pedigree too!), also running for the Dem nomination for PA-08 (or whatever the new district will be); great to see two strong Dems emerging to take on Mikey The Beloved’s spineless brother (I had some slim hopes for Bri-Fi, but he flushed them when he sold out for the tax scam of Generalissimo Trump and the two craven life forms running that party from each chamber of Capitol Hill)… 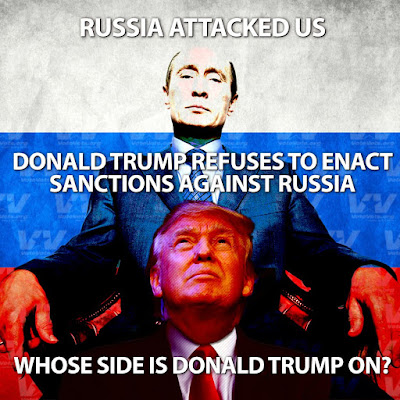 John and Cenk of TYT bring us a report on the indictments against 13 Russians brought by Special Counsel Robert Mueller; yeah, this doesn’t touch the Gropenfuhrer’s inner circle – yet – but I think we need to keep this in mind too…

Golden State Warriors Coach Steve Kerr on school shootings: "We can do something about it. We can vote people in who actually have the courage to protect people's lives and not just bow down to the NRA." https://t.co/dTeZ4Qhzzf pic.twitter.com/DMuD9IrVw0


…and it’s taken awhile for me to get around to this great (comparatively) new tune, but here it is.