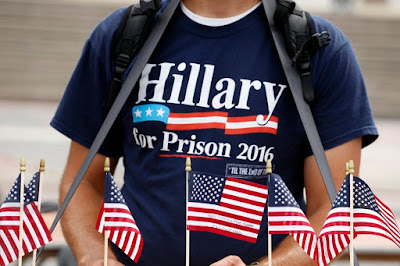 This is a great video IMHO by Carlos Maza of Media Matters about just how crazy many of us have become in this country, leading to the presidency of “Donald Drumpf” & the normalization of “Lock Her Up” rhetoric aimed at Hillary Clinton (and worse, of course)…

Update 11/22/16: HA HA HA…hey, all you “Donald Drumpf” supporters: looks like your boy played you for the saps you truly are once again based on this.

…and Cenk and Ana tell us what is REALLY going on with the story of the Dakota Access Pipeline that is either being ignored by the news networks with initials for names or, when it IS being reported, includes coverage spun ridiculously in favor of Energy Trans Partners and CEO Kelcy Warren…

…and even for a Trumpster, conjuring up images of a Japanese internment camp as something that merits ANYTHING besides scorn in disgust (here) is almost too vile for words, as George Takei reminds us in the clip…

…all of which makes me recall this tune. 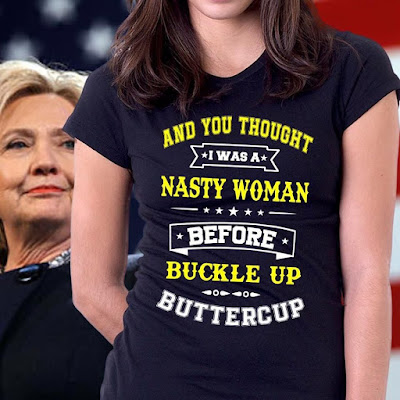 Still proud of yourselves, all you idiots who voted for Jill Stein and Gary Johnson?...

...and David Pakman tells us of what Adm. Michael Rogers of the NSA says about Russian involvement on 11/8 (and by the way, I’m tired of the complaining about how the DNC apparently wanted HRC at the expense of Bernie Sanders – maybe, but believe me, the DNC isn’t powerful enough to pull off something like that)...

…and by the way, you can consider this as my response to the Clinton campaign saying that they lost the election because of James Comey, though what Comey did was awful – HRC was in trouble long before that point, and it was her own fault as far as I’m concerned (and I'm sorry, but with respect, not voting for a president was a vote for Trump)…

...and of course, our Beltway courtier corporate media will grovel on cue (more here)...

…and yeah, Lee Camp, echoing Cenk, reminds us who is also to blame in no small part for our electoral debacle…

...and Rachel Maddow tells us here about "The Donald" tripping all over himself with world leaders – God, what a train wreck (this too)…

…and a hat tip to Frances Langum at Crooks and Liars for this clip of The Eternal Molly Ivins – John Henry Faulk, by the way, was the guy who successfully sued to end the Hollywood blacklist…

…and I mean this song as a metaphor, by the way – only that.

I realize that there’s going to be such a torrent of garbage coming from the Trump Administration (ugh) that it’s going to be impossible for one person to refute it all, but I think the potential confirmation of Rudy 9iu11ani as Secretary of State is something to scream out against (here)…


…and TYT tells us about the Neo Nazis supporting New Balance (love my NB sneakers, by the way…and no, for the record, I don’t think supporting Trump automatically makes you the scum of the earth, though I don’t want to hear anyone else opining about how the Repugs supposedly accomplish this “genius” feat of making people in this country vote against their own interests…the solution to that is better strategy (and a LOT EARLIER in the cycle too), better policy, better messaging, better organizing, better outreach, and a better game plan ultimately to pull everything off and deliver the votes when it matters; again, Number 44 was able to accomplish this twice, so it CAN BE DONE, DEMOCRATS!)…

…and George Goehl talks with Thom Hartmann about how to make Trump a one-term president (hopefully, from the ashes of this utter misery, we can build a sustainable foundation of progress for the future)…

Posted by doomsy at 8:21 AM No comments:

If you’ll pardon the expression, I believe that the issue discussed here “trumps” all the others…

Update 11/17/16: Just so precious from Kellyanne Conway here – way to kiss off an entire generation who, as a group, will NEVER vote Republican now…nicely done.

…and remember when we actually had newspapers and something approximating “traditional media” in general run by, you know, news professionals who could actually describe and analyze issues in a way that would engage their readers and viewers? And how conservatives started screaming “liberal bias” all over the place, which led to the obsession with “balance” even in stories where there was no balance to be found, all in the name of placating conservatives? And how that is slowly leading to the death of what you could call traditional media? Well, I think the same damn thing is being played out on Facebook, as Chris Hayes and Antonio Garcia Martinez discuss in the clip below…

..and Kyle K. gives us another NSFW commentary which, sadly, is pretty spot-on I think (even though I think he’s a bit snarky about HRC, he’s fundamentally right…I didn’t pay much attention to Trump since it’s pretty damn obvious what he is, but again, he capitalized on the vulnerabilities of the Clinton campaign, to our great misfortune)…

…and based on this, we could be looking at a looooong four years here, people – sigh.

Three words in response to this commentary from Thom Hartmann: Nail. Hammer. Head (and by the way, the movie reference about Donald Sutherland yesterday was from "Kelly's Heroes," for those of you playing along at home)…

...and I think this is another good commentary from Brian Stelter on what he correctly IMHO calls “anti-media,” though I think he’s a little late to the proverbial party on this – he really should take this to the next step and point out how “anti-media” has polluted so-called respectable, mainstream media, including his own network (and “elitism” is just a right-wing dog whistle in an attempt to beat the so-called “liberal media” meme to death yet one more time…also, there are a lot of people who think they know what happened last Tuesday who definitely don’t for my money, but I think Kurt Eichenwald knows what he’s talking about here)…

...and I always thought it was garbage for conservatives to complain in particular about PBS journalist Gwen Ifill in 2012 as a debate moderator (of course, they thought she’d favor Obama – I guess all “blahs” look the same to most of the Repugs, and probably some Dems too); I thought Ifill was a solid professional – RIP (and take a long, last look at a president who truly knows how to act presidential before he leaves us, people – sigh)...

…and with that in mind, are you still proud of yourselves, all you Jill Stein and Gary Johnson voters (here)? You know, all of you space cadets out there who just felt that politics was just oh so corrupt to vote for a candidate who, you know, ACTUALLY REPRESENTED WHAT YOU CLAIM TO BELIEVE IN?

And yes, I expect to be asking that question for at least the next four years…

…and here’s another selection for Generalissimo Trump’s Dance Party. 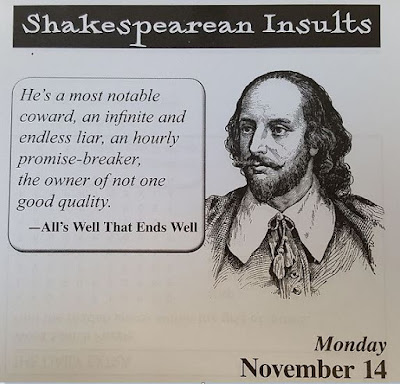 Hmmm, does this remind us of anyone we know (from today's desk calendar for yours truly)? Let's think really hard now - I also posted here...

...and we're looking at, in all likelihood, four years of this crap, people, from "the deplorables" (hopefully no more and somehow less)...

I asked for her name, I got crazy cursed at. #TrumpTower pic.twitter.com/JOArxMqQnB

...and “always with the negative waves, Donald”…just kidding (here - when it comes to that comment, I mean – snap quiz: name the movie reference…)…kudos to Sutherland for that moment of candor which may end up with him now getting turned down now for a whole bunch of movie roles…love to be wrong; his comments are thoroughly correct of course, but good luck with any positive changes as a result any time soon…the stuff that matters starts at about 3:00; how anyone can laugh after hearing them…well, you must have no soul whatsoever, that’s all…

…and when I heard that conservatives were complaining about an alleged “liberal bias” with Facebook (whenever you hear that, rest assured that somebody is lying), I should have realized that Zuckerberg was going to do something to try and placate conservatives, which NEVER works well as far as I’m concerned, opening the door to stuff like this…

…and I know she has been a successful business woman to her credit, but I always thought she was a kook also (though her husband once famously said he’d gladly be one of the world’s clowns if it meant peace and better lives for people in general – I’m paraphrasing)…still, she’s trying to do something positive here – by the way, you’ll probably detect a theme in my musical selections for a little while, just to warn you in advance (fabulous bass line by Tony Levin).

Posted by doomsy at 3:07 PM No comments: