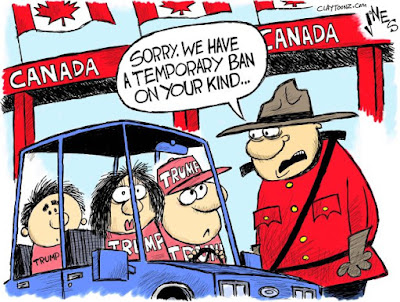 …and I do not in any way share Mike Malloy’s “deep respect” for New York Times columnist Frank Bruni, who as far as I’m concerned had more to do with pushing the “regular guy you want to have a beer with” narrative about Dubya in 2000 than anyone else, but I have to grudgingly admit that Bruni is absolutely right in the column Malloy discusses for the reasons Malloy notes (though I have a kinder view of Bill Clinton than Malloy does)…

…and Kyle of Secular Talk gives us his take on Steve Schmidt leaving the Republican Party (NSFW…and by the way, let’s not forget that Schmidt helped bring us “Caribou Barbie,” as Kyle reminds us…also, a recent comment by Kyle stating that Rachel Maddow is the left wing version of Glenn Beck was one of the stupidest comments I’ve ever heard – it was related to Maddow’s recent crying episode on air, which shows commendable humanity on Maddow’s part as far as I’m concerned)…

…and kudos to Stephanie Ruhle for this (Nail. Hammer. Head.)…

…and Farron Cousins has more to say on Melania Trump and that ridiculous jacket of hers (and news flash, people – she was a fashion model; she knew EXACTLY what she was doing, as Cousins reminds us)…

…and happy 70th (!) birthday to Upper Darby’s own Todd Rundgren (wonder if he gets tired of being reminded about that?) – I went back and forth on a few selections, but settled on this one.

Posted by doomsy at 2:32 PM No comments: 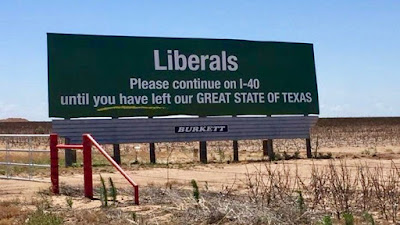 (OK, three responses right off the bat: 1) The billboard was eventually taken down, 2) With the possible exception of Austin and/or Corpus Christi, I wouldn’t want to get caught dead in your ass backward state anyway, and 3) I try to keep the language on this site as clean as I can except when I believe an exception is warranted, so I’m not going to tell you what to do with your stinking yellow rose.)

To begin, I think Seth Meyers is getting a little fatigued from trying to lampoon Generalissimo Trump – can’t say I blame him (and “Vanilla Spock” – awesome!...and GREAT point at the very end about voting, people!)…

…and Cenk and Ana of TYT tell us that the U.S. is withdrawing from the UN Human Rights Council because of perceived bias against Israel; yeah, I would say that we’re through the looking glass at this point (and I would also say that our enemies are ecstatic as well)…

…and I was wondering what our Wet Noodle 2.0 U.S. House rep for PA-01 had to say about the crisis of separating kids on our border, and while he criticized what was going on, he pretty much echoed the RNC and Fix Noise talking points, blaming failed immigration policy instead of our Tiny Handed Orange Dictator Wannabe (here) – kind of what you would expect from the individual who did this about two years ago (and to do something about it, click here)…

…and here’s a tune for the official beginning of summer (probably showing my age a bit with this one, but as far as I'm concerned, you can never go wrong with Nat "King" Cole). 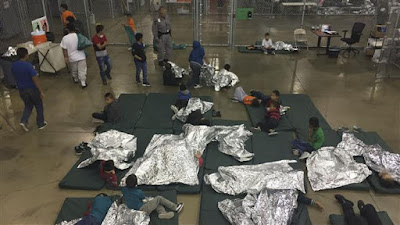 This CBC report is following the news cycle I know given that the Gropenfuhrer has apparently bowed to pressure on the whole “incarcerating children” thing (and I think we should keep this and this in mind on this also), but let’s not forget this as well…don’t give Number 45 and his disgusting minions credit for a damn thing - we were warned about ALL OF THIS during the 2016 campaign…

…but of course, Laura Ingraham said that Trump’s detention centers are “summer camps” – good; I’m sure she’ll have no trouble living in one of them, then…

…and as far as I’m concerned, this vintage film (from what was once the War Department I believe) is a fitting response to Ingraham and her ilk (here)…

…and I know I’m just a pointy-headed liberal, but given all of this, I felt like hearing this song.

Posted by doomsy at 3:38 PM No comments: 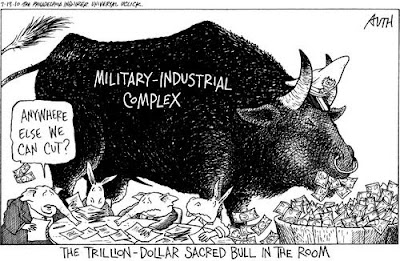 …and it looks like Domino’s Pizza is finally good for something – I realize they’re not talking about actually filling the potholes with their product, but they might as well be as far as I’m concerned…

…and Kyle reminds us once more how easy it is for Repugs to use the Bible to justify their hateful behavior, though they remain utterly unable to do that for anything favored by Democrats of course (how con-vee-nient - NSFW)…

…and wow, color me shocked…I knew absolutely nothing about “June-teenth” (more here) – here is a tune for the occasion.

Posted by doomsy at 2:20 PM No comments: 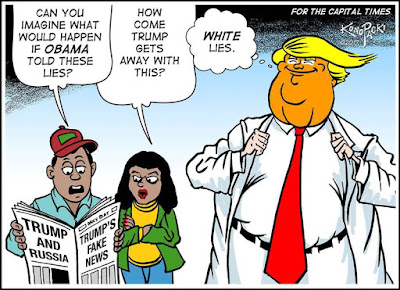 I get it that this commentary from Lawrence O’Donnell on the Gropenfuhrer was timed more for the recent North Korean episode of “Celebrity Apprentice President,” but I think it’s important to keep in mind not only now, but every moment that this treasonous fraud continues to take up space in An Oval Office…

…and speaking of Generalissimo Trump, I give you this profile in cowardice from Lou Barletta, running against Bob Casey for the U.S. Senate…

…and I’m sure Barletta and the other troglodytes in his party are perfectly happy with this (and probably don’t care much about this either – the last 3:00 of this should be committed to memory by every voter in this country)…

…and here is today’s regional weather forecast (a little late, I know).

Posted by doomsy at 7:06 PM No comments: