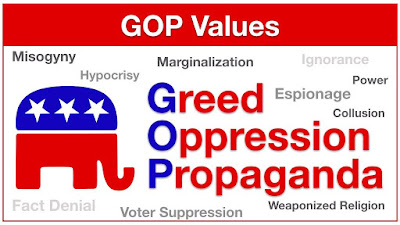 And I remember that Charlottesville was such a nice town – I guess the NASCAR channel was showing reruns last night (good tweets in response by Charlie Pierce here, here and here...more here)…


Update 1: For anyone who has any doubt as to what these cretins are all about, I give you the following pic from here... 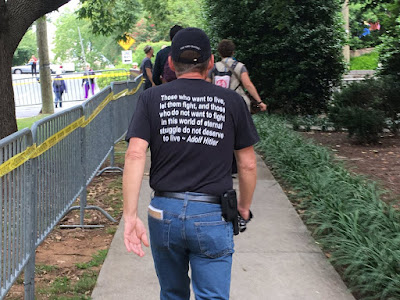 Update 3: In response to this, I have only the following to add... 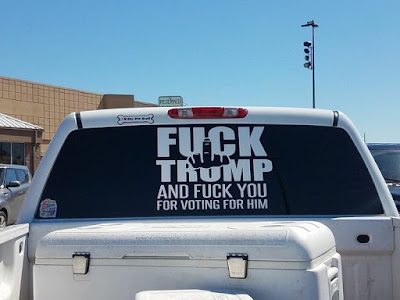 Update 1 8/13/17: More blood on the hands of these white nationalist crazies – sympathies and condolences to the families and friends of the two state troopers (here)…

…and Thom Hartmann gives us some background on stupid wars waged by conservatives (“all happened within one Scaramucci” = 10 days…funny; interesting talk on the 25th amendment too)…

'When you have the nuclear codes at your fingertips, you can't make snap decisions' — Michelle Obama in July 2016 pic.twitter.com/p4HQvolHGd


...and John Oliver tells us the latest on the border patrol (yeah, I think we need a bit of a cleanup in that area, along with some actually realistic advertising as to what the job truly entails – NSFW)…

...and it looks like the Gropenfuhrer is ready for "Just Say No, The Sequel" (however, D.A.R.E. can be successful, but not by itself of course)...

...and I hope you're in the mood for a Glen Campbell encore, because here it is - from back in the day. 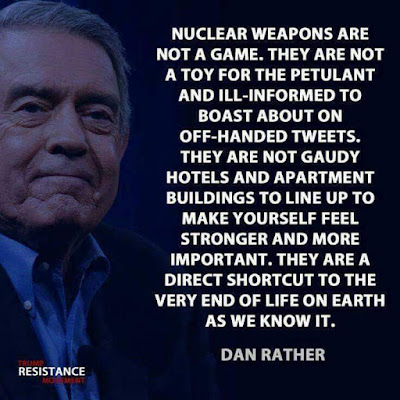 Robert Reich tells us just how close the parallels are between Generalissimo Trump and Tricky Dick (and I thought this was a joke from The Onion, but with the Big Orange Cheetoh, I guess I should know better)…

Obstruction of justice was one of the key charges that forced Richard Nixon to resign. The parallel between Nixon and Trump is almost exact. pic.twitter.com/xc1Ssh7Vyq


…and Rachel Maddow tells us that it looks like Robert Mueller has something on Paul Manafort, but we’ll see (“tough stuff”? Number 45 ain’t seen nuthin’ yet, as they say – when it’s all over, Preznit Tiny-Handed Impulse Control Issue Egomaniac won’t have a pot to piss in)…

…and did you ever wonder what would have happened if Dear Leader’s predecessor had acted like the current occupant of An Oval Office? Well, I think Bill Maher gives us some idea here (NSFW)…

…and whatever it took, it’s still good that Jeffrey Lord is out at CNN (NSFW also…I think all the panelists make good points including Cenk, in particular saying that this was weak sauce by comparison for getting rid of Lord, who had no business even being on the air to begin with…this reminds me a bit of the dustup over Bill Maher saying the “N” word recently, but maybe it’s just me – I think the backgrounds for the segment got mixed up a bit)...

…and I know this is some ultra-cheeky commentary from Lee Camp at Redacted about a “Foxconn” plant coming to Wisconsin, proving, as he says, that wages of U.S. workers on the whole are finally so low that companies can offshore jobs from their locations to here and still remain profitable in a thoroughly disgusting manner (NSFW yet again)…

…and I think this is an appropriate tune for us to bid adieu to Glen Campbell – still had his vocal “chops” late in his career in comparison with other artists. 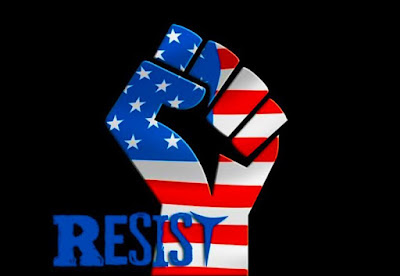 Rachel Maddow tells us some US personnel in Havana have been affected by something, and we asked two Cuban officials in this country to go in response; glad we cleared that up – huh? And actually, we DO know some people in Cuba, and I won’t say anything else about that…

…and kudos to Shep Smith once again for setting the record straight between Number 44 and more typical lies from Generalissimo Trump on the question of our nuclear arsenal (here); Chrome will probably muff this up, but it should be OK on other environments including an Android cell phone...

…and Seth Meyers comments on the Gropenfuhrer and North Korea (awesome job on the limerick, by the way)...

…and potty mouth Kyle tells us about those Fix Noise clowns on North Korea; yep, lather, rinse, repeat with this bunch – NSFW (yeah, let all those hairdos pick up guns and fight, including this Kennedy whatever person)…

…and here’s another memorable Glen Campbell tune – I never thought that this tune was chauvinist in any way (and yeah, I know the lip sync is off a bit). 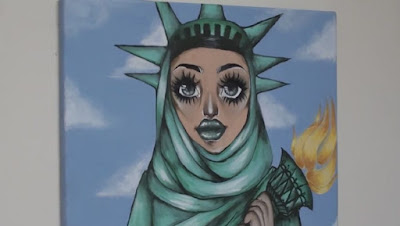 Oh - OF COURSE Caribou Barbie is outraged (here)! I mean...she has to say or do SOMETHING to try and remain relevant in her imagination somehow, right?

And with the pic in mind somewhat, Cenk and Ana tell us that the Impulse Control Issue Child In Chief Who Wants To Nuke North Korea (and as I said yesterday, can’t we put him in a goddamn straightjacket before he tries to do that?) hasn’t said a word about the recent terrorist attack on a mosque in Minnesota (update is here – and who exactly is this sanctimonious assh*le Sebastian Gorka anyway? Lemme guess – another white nationalist? So much winning!!!)…

Update: Kudos to Chelsea Clinton for this (I quite agree).

…and Farron Cousins lets Dem Sen. Joe Manchin have it over a truly ridiculous response by Manchin when asked about his votes (a fair point, but I have to say that I’m getting a little fed up with the Dem purity tests going on right now…yes, Manchin needs to move to the left along with more than a few others, I get it, but if we can’t get our shit together and unite against Generalissimo Trump, we’ll never be able to do it against anybody...borderline NSFW)…

…I’ll tell you what – instead of beating each other up, let’s watch this video by Robert Reich and find out ways to take it out instead on Repugs who are in their districts and facing their constituents over the August recess instead, OK? And not surprising to find out that Ron Wyden is absolutely solid on this subject, by the way...

While members of Congress are back home on August recess, it's important that we make our voices heard. A few tips from @IndivisibleGuide: pic.twitter.com/HlGUQ5wuSp


Update 8/10/17: All of that being said about trying to unite as Dems, I believe that every word of this article should be memorized by those Dem-party Beltway jokers who do nothing but lose elections (somewhat shocking, but it bears out what many others have said, including your humble narrator...h/t Eschaton).

…and Joy Reid tells us that our former ol’ buddy Vlad Putin wants to utterly screw us over using Bitcoin, in an attempt to get around the recent sanctions passed by Congress…

…and Stephen Colbert has some fun with Fix Noise clown Eric Bolling and his recent photographic misadventures, shall we say (the jokes truly write themselves...a shaved squirrel?)…

…and Glen Campbell was truly a multi-talented entertainer – host of a popular variety TV show (you can Google the term) from way back, crossover pop/country star, movie actor, and also highly accomplished SoCal “sessions” guitarist with The Wrecking Crew…if I were to feature all of his great tunes (with the expert help of songwriter Jimmy Webb more than a few times), I would probably need a month, but as it is, I’ll devote the rest of this week to three in particular, including this one – RIP.

Posted by doomsy at 3:26 PM No comments: 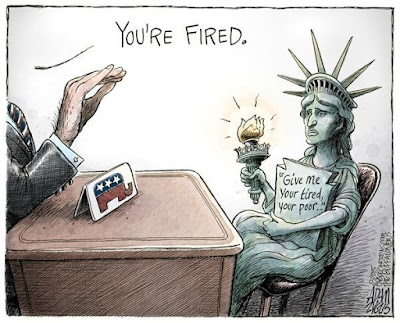 Umm, does anyone else besides me think that it’s waaaaay past time to impeach this lunatic (here)?

And spare me that this somehow makes Trump “presidential” like Harry Truman – yes, Truman did say something similar on August 6, 1945, but we were trying to finish that little squabble called…oh, it was just on the tip of my tongue; I know it’s in the history books…oh yeah, WORLD WAR FREAKING TWO!...

Here’s what Big Oil, a funny-looking bird, and the Trump administration have in common pic.twitter.com/Zcb3A9ftv7


…and K.O. gives us the latest here – gosh, could it be that Jeanine Pirro of Fix Noise is somehow a member of the “Resistance” after all? Sorry if that gives away the end…

...and I know Huckleberry Graham has a spotty record at best when it comes to standing up to President Fergus Laing, but credit where it's due here...

President Trump is aligning himself with Russia instead of Congress pic.twitter.com/ErkP7fGoNs


…and Seth Meyers tells us about Generalissimo Trump’s 17-day vacation (leave him to wander around in Bedminster, NJ without his cell phone, OK? And maybe give him a metal detector to pass the time)…

…and I know I’m late with this idiocy from Alan Dershowitz, but kudos to Paul Butler and Richard Painter in particular for bringing down the proverbial hammer…

...and I guess you could say that Mickey Mouse has bigger "ears" than we thought (or maybe not)...

Disney might be selling your kids' information to advertisers pic.twitter.com/UFCz3PBGWi


...and here's another summer tune (kind of an antique, but definitely still works IMHO).

Posted by doomsy at 4:07 PM No comments: 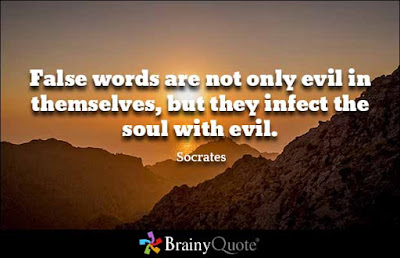 I couldn’t quite get to this item last week, but let’s definitely support Kentucky Dem Amy McGrath in her quest for the U.S. Congress (more here, and more like this)…

…and nothing to see here, just another critic of our former buddy Vlad Putin murdered – move along…

…and yeah, how’s that wall working out for you, Trump voters (here)? Yeah, isn’t “eminent domain” just “tha’ bomb?” But ZOMG, HILLZ BENGHAZI EMAILS!!!!! And kind of a clumsy cut at the end, but you get the picture...

…and timed for the recent 52nd anniversary of the since-gutted Voting Rights Acts, Robert Reich tells us what we can do about it (here)…

…and I tried to come up with the best tune I could think of as a tribute, and I settled on this one (God, those ‘70s flared pants are hideous!).

Posted by doomsy at 4:18 PM No comments: