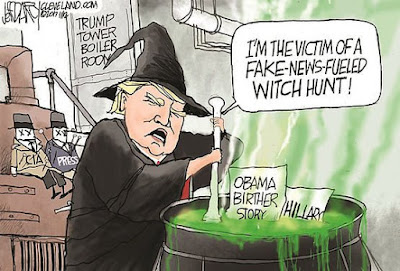 (I know I was able to post for all five days this week, but that will probably be the exception rather than the rule going forward, just to let you know.)

To begin, David Doel tells us about the passage of the impeachment resolution against Our Treasonous, Tiny Handed Orange Dictator in the U.S. House (I agree with him on not just the emoluments, but also the 10 instances of obstruction identified by Robert Mueller)…

…and gosh, it looks like Mango Mussolini’s political party is in a bit of a tizzy about the elections next year – c’est dommage (honestly though, I don’t want to contemplate that at the moment)…

…and I’ll admit that there are times when I’ve gotten a little annoyed at MSNBC, particularly over its periodic Russia fixation (and yes, I know the story is critically important, but I just can’t deal at times), as well as the network’s attempt to disappear Bernie Sanders, but I have to give Rachel Maddow credit for tackling this issue, namely, that the state of Missouri is, in essence, trying to outlaw abortion altogether, with the help of this Randall Williams lunatic and his spreadsheet tracking the menstrual cycles of women seeking services from Planned Parenthood…this is government-inflicted cruelty and misery the likes of which I can’t recall that I’ve ever seen – because of this, Williams should be forced to announce to the entire world every time he has an erection…

…and if you’re looking for someone who’s at least partly responsible for the utterly disgusting behavior noted in the prior video, then I would lay some blame at the feet of this Rick Wiles character, as David Pakman explains…

…and happy upcoming 65th birthday to Adam Ant – when I think of the Gropenfuhrer, I often think of the title of this song.

Posted by doomsy at 1:49 PM No comments: 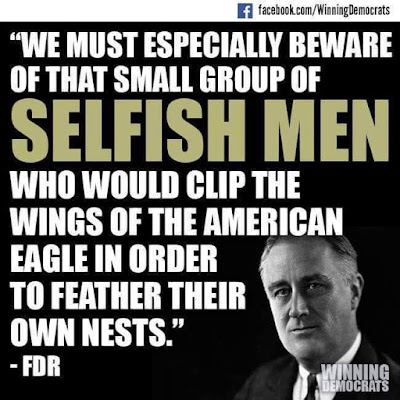 I’m so glad that Thom Hartmann gives us these periodic reminders about our country’s rich, Democratic/progressive legacy, particularly under FDR chiefly as a response to the Great Depression (Thom quotes FDR's SOTU speech in 1938)…

…and in a related item, this whole clip is good, but the last 45 seconds or so of this, discussing a failure of regulation, are great (here...still going back and forth between Bernie and Warren, to tell you the truth, and people, please, if you're able, how about pitching some coin to Kamala Harris and forget about Mayor Pete, Klobuchar and #JillStein2020?)...

…and Robert Reich tells us about at least 6 ways that Our Treasonous, Tiny Handed Orange Dictator has sold us out (there are probably a whole bunch more, but this list will do for now)…

…and TRMS tells us about the Trumpsters ending the medical deferred action program for legal immigrants, endangering critically ill kids as Maddow tells us (and Ken Cuccinelli, of all people, tells us that it’s Congress’s fault, which is bullshit…the interview Maddow conducted after this with Dem U.S. House Rep Mark Desaulnier of California was excellent, but of course it’s not available from MSNBC’s awful web site)…

…and I now give you the latest installment of “This Day In Doomsy History” from 10/31/07 (going way back here I’ll admit, and no, you don’t need to remind me what happened with John Edwards, a guy who I plugged on this site who fell from grace big time, and you also don’t need to remind me about the GOP “I Feel Pretty” and “Breck Boy” attack ad garbage…even though the messenger is definitely imperfect, let’s try contemplating the message in this presidential election season, OK? And yes, I'm definitely thinking of the prior TRMS clip as I watch this)… 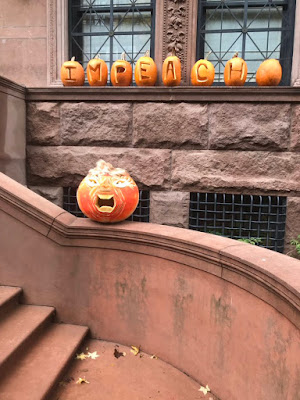 ...and by the way, Happy Halloween everybody (and no, I'm not the least bit surprised by this...a profile in cowardice by Bri-Fi, among his other same party pals). 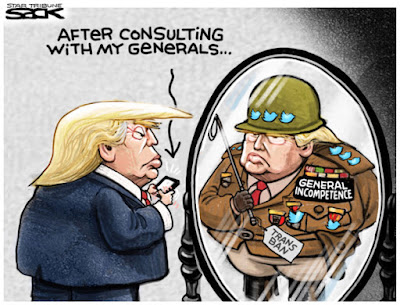 I have to admit that I gave up long ago when it comes to hoping the wingnutosphere, Fix Noise and the like finally say “You know what? We’ve had it with Mango Mussolini. He needs to be removed from office and put in a prison cell.”

It doesn’t matter how impeccable the credentials are of someone pointing out that Number 45 is grossly unfit for the job he currently holds, to say nothing of hopelessly corrupt. And I would say that the attacks on Lt. Col. Alexander Vindman put an exclamation point of sorts on that opinion (not the most original of “hot takes,” I’ll admit) – John of “The Damage Report” has more (and kudos to Nicolle Wallace for this)…

…and I don’t know if Wallace was referring to GOP strategist Frank Luntz in her comment or not, but if not, she might as well have done so as noted here in the matter of chastising those at Nationals Park who recently booed Our Treasonous, Tiny Handed Orange Dictator before Game 5 of the World Series (so many possible comebacks in response I’ll admit, but I’ll settle on this one from almost 10 years ago...just our Beltway bought-and-paid-for courtier media doing what it does best, which is to lecture the rabble)…

…and Sam and the TMR crew tell us about Jeremy Corbyn dishing it out directly in front the UK’s version of the Orange Pestilence in parliamentary session (no, I don’t get the whole “Brexit/snap election” thing either, but if nothing else, it’s entertaining to watch our friends “across the pond” go at it on the political stuff…they definitely don’t mess around)…

…and gee, maybe we ought to do something about this climate change thing, huh?...

…and I wouldn’t say the numbers are quite “half and half” on President Fergus Laing, but it looks like the cops (in Phoenix at least) are taking sides somewhat in an indirect way, as Farron Cousins and Scott Hardy explain…

...and here's another seasonal selection. 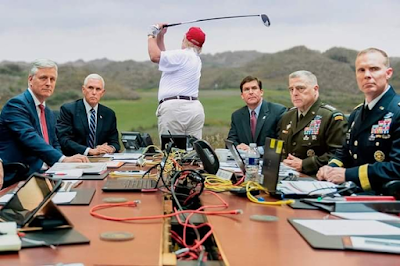 John Iadarola and Brooke Thomas tell us about the photo of Generalissimo Trump and his minions supposedly monitoring the raid that killed ISIS leader Abu Bakr al-Baghdadi and compare it with the pic of Obama, Biden, Hillary Clinton, Robert Gates et al doing the same thing while we captured and killed Osama bin Laden – yeah, I’ll grant you that there are other stories out there I think we should pay more attention to, but I think it tells you something about Trump’s pathology towards all things Obama that it is being discussed at all…

…and in a similar vein, I know this is a little behind the news cycle, but I still thought it was noteworthy; Rachel Maddow called out NBC Universal recently (her parent company) over the NDAs related to Harvey Weinstein – kudos (she sets it up for the real payoff starting at about 11:15, but really, this is just top-notch reporting on her part and some tempered finger-wagging, you might say)…

…and here is a periodic reminder that, yes, I do chastise Dems in this space from time to time when I think it’s deserved, and that goes for U.S. House Rep Richard Neal of Massachusetts for the reasons that Cenk and Ana tell us here (kudos to Lloyd Doggett of Texas, though – to help Neal’s primary challenger, click here)…

…and years ago, I once watched “The Kid Stays In The Picture,” which I think was a great documentary about legendary Hollywood producer Robert Evans, who just left us; yes, pay tribute to Francis Ford Coppola, Martin Scorsese, and a whole bunch of other acclaimed directors who rose to prominence in the ‘70s, but I firmly believe that without Evans primarily, fighting for a more personalized type of moviemaking in the hands of largely unproven folks such as those I just mentioned, we wouldn’t have had such legendary films as “Chinatown,” “Rosemary’s Baby,” “Marathon Man,” “Love Story,” and of course “The Godfather”…

...and I think it's time to bring back this seasonal tune. 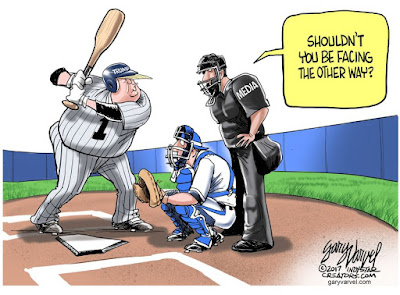 As someone who has followed the Phillies through thick and thin (mostly thin), I’m loathe to give the Washington Nationals credit I’ll admit, even though they have had a good year, and kudos to their number of fans who gave our Orange Pestilence the treatment he deserved last night, as Brian Tyler Cohen explains (and how cowardly a move was it for the person in charge of “phanavision,” or whatever they call the scoreboard, to cut back to a pic of our military when the booing got too loud)…

Update: And I wonder how much this is costing taxpayers?

…and I think this is EXACTLY how you should report on the Gropenfuhrer (tied to the recent killing of ISIS leader al-Baghdadi; I’m reading that 45’s mishaps with the Kurds in Syria made this harder for our military, as noted here…more here...and yeah. let's not forget this too)…

…and when it comes to not putting up with anybody’s BS, props to AOC for making that worm Mark Zuckerberg come up with some pretty brazen nonsense at a recent hearing, as Sam and the crew from TMR tell us…

…and RIP longtime Dem U.S. House Rep John Conyers; he had a complicated legacy for sure, but I still think it is worthy of tribute...

...and here is a seasonal selection in anticipation of the ghouls and goblins who may show up on Thursday, though as already pointed out, they already reside in mass quantities in Washington, D.C.