I now give you the latest installment of FAIR TV…

…and so let me get this straight – it’s somehow OK that Michael Brown, who was unarmed by some accounts, was killed because he allegedly shoplifted some cigars? Really??!!...

…and yeah, I think this about says it (kicks off a loop of videos which look pretty good, actually)…

…and on a wholly other note, today marks the 45th anniversary of Woodstock – with that in mind, I give you this (amazing performance by drummer Michael Shrieve, among others).

Posted by doomsy at 6:19 PM No comments:

I’m definitely behind the curve on the madness in Ferguson, MO I’ll admit, but I feel like I have to add my own admittedly small contribution here (spurred on a bit by this too – h/t Atrios; this all screams for a federal grand jury investigation, and that body should have subpoena power - and uh, after reading this I have a question: what country am I living in again?)…

...and Joy Reid provides some much-needed historical context here, and she also asks some good questions...

...and let's not forget about the possibility of more "big gumint" overreach by that Kenyan Muslim socialist in the White House (snark of course)...

…and yeah, what the hell – here’s another music video (kind of thinking about the passages this week, if you will).

RIP Lauren Bacall, an ingenue from another era and a damn fine actress too (and wife of a truly great Democrat)...

…and speaking of Democrats, once in a while, I think we need to be reminded of what the fight is all about…

...and the last 20 seconds or so here are the ones that matter as far as I'm concerned with Cenk Uygur opining on "Fluffyhead" - oh, but Comcast/Universal/Comcast/MSNBC/Comcast/Whatever are SO RUDE for letting Greggers twist in the wind, as it were - welcome to corporate America...

...and here's a tune to rage with against the slowly fading summer :-(.

Posted by doomsy at 6:08 PM No comments: 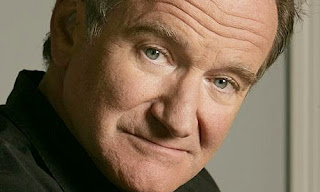 About all I feel like doing at this moment is putting up videos as a tribute to Robin Williams.

I don’t have anything particularly interesting or profound to say about his death – I definitely wish to extend condolences to family and friends, and respect the family’s wishes to highlight only what he gave to the whole world. I think we’re starting to come to grips with the huge contribution he made to comedy and the arts and the size of the void we now face with his passing (also his acting talent, period - never saw "One Hour Photo," but I heard it was pretty creepy).

I saw a doctor on CNN last night say something about his years of alcohol and substance abuse and how that, combined with his recent heart surgery, could have contributed to his depression. I’m not saying that to heap dirt all over Williams’ memory, definitely not – only to point out that we need to be ever vigilant if we’ve had similar circumstances to guard against the trap Williams fell into (which, again, could befall any one of us).

Not to sound trite or preachy, but every day is a gift – that’s what I hang onto at times like this anyway (and the musical selection at the end is the one that’s been running around in my head all day long, for what it’s worth)…

Oh yes, let President Obama journey to that allegedly ultra-rich, hedonistic paradise up north (yes, there are definitely places where the “one percent” go to have fun, but there are plenty of places on the island for the “47 percent” too, and we all pretty much get along –and yes, this is a recording).

And by the way, when it comes to presidents and vactions (here)...

…and I think this is why we elect politicians that we hopefully trust, or should anyway – when it comes to ISIS and Iraq, I think Number 44 deserves the benefit of the doubt for now (and if this were 10 years ago, would we even be asking this? How loudly were people hooted down who dared to criticize Former Commander Codpiece? And yes, Adam Kinzinger is a cowardly scumbag - Ryan Grim makes a great point at the end out ISIS's weaponry...hmmm, wonder how much of that came from us?)…

…and changing the mood more than a little bit, Stephen Colbert gives us the new diet supplement from Rand “Fake Ophthalmologist” Paul)…

...and notwithstanding the video, I honestly like this tune - really.

Posted by doomsy at 5:19 PM No comments: