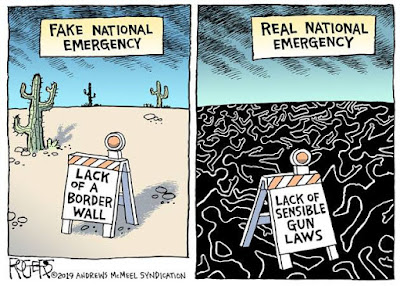 Leave it to The Putin Network to tell us about a gadget that could help the cops identify the caliber of a weapon or the ammunition used in a mass shooting (snark...or better yet, why don’t we just keep pushing for SANE GUN LAWS TO TRY AND PREVENT THE DAMN SHOOTINGS IN THE FIRST PLACE??!!)…

…and speaking of “the wall” that Our Orange Maniac Child President has been caterwauling about, I have to admit that this clip blew my mind – heard about it on Twitter yesterday (here)…

…and ZOMG! It looks like those SCARY MUSLIMS are actually cleaning up our national parks during the government shut down – wait, what? And anyone who litters the reflection pool at the mall in D.C. should get his or her ass kicked; I DO have to agree with the Dems, though, and say that, for safety reasons if nothing else, the parks should be closed during the shut down – yeah, I know that pisses off people who’ve planned vacations, and I feel bad about that, but there’s a simple lesson here, people – STOP VOTING FOR F*CKING REPUBLICANS WHO SHUT DOWN THE GOVERNMENT!!!...

…and I went through my mental Rolodex of “wall” songs to see what I could come up with, and I settled on this.

Posted by doomsy at 1:29 PM No comments: 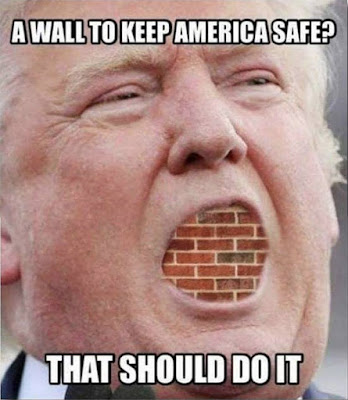 As some have pointed out, I guess we dodged a bit of a bullet last night, you might say, when Generalissimo Trump didn’t declare a national emergency over his stinking wall, though we still have far to go to fix this mess unfortunately – I thought this recent commentary from Chris Cuomo of CNN gave us some really good context…

…and David Pakman tells us what we probably knew already, which is that the Gropenfuhrer doesn’t know what a shutdown truly does…and also, while we’re quite rightly blaming Repugs, don’t let that gutter snipe Mick Mulvaney off the hook, Trump’s COS (POS is more like it), since this is what the “Freedom Caucus” really wants…

…and the following from “Now This” tells us about the threat of industry concentration (you can add the telcos to this list too, by the way – basically the choices are Verizon and Comcast, which is like having to choose between bubonic plague and leprosy…the cynic in me says, “Yeah, well, Josh Hawley and Mike Lee don’t have to worry about campaign contributions from tech companies in Utah and Missouri I’m sure,” but for now they’re doing the right thing – as the hero of their party once said in another context, “trust, but verify”…but when it comes to Hawley, it looks like he won’t be playing “hallway roulette,” whatever that means, as noted here…too self-entitled to answer questions affecting his constituents, apparently – didn’t take long for Hawley, did it?)…

…and yesterday would have been the 72nd birthday of David Bowie, and tomorrow marks the 3rd anniversary of his passing. 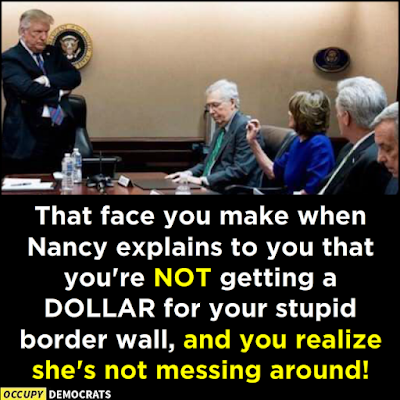 I’m sure there are drinking games that some folks will come up with given that Our Lying Orange Lunatic Wannabe Dictator is going to address the nation tonight on our alleged border crisis, but I would suggest that you NOT take a shot every time the word “wall” is uttered (or “slats” or “fence”), or else you might end up in the emergency room – given that, Cenk and Ana of TYT tell us about Huckleberry Graham’s propagandizing on this subject (and as Cenk says, there’s NO WAY Huck will take $5 bil from our ridiculous defense budget for this PR boondoggle because that hurts Graham’s donors)…

..and I thought this was a pretty good NSFW discussion by Kyle K. on what a marginal tax rate truly is given what AOC is proposing (around 60-70 percent), which is actually pretty mainstream stuff (and GREAT point at the very end to compare this with what is pretty much the actual tax rate for our corporate overlords)…

…and I FINALLY finished Elvis’s great book over the holidays – kind of a stream-of-consciousness memoir, but I thought it was a fascinating insight into a truly full life in music.