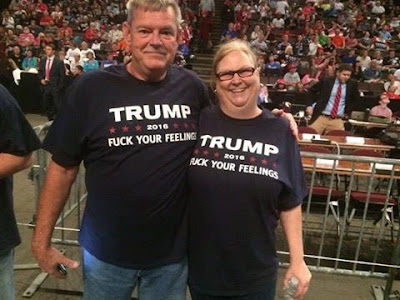 I would say that Bill Maher was pretty spot-on here with his words about the Gropenfuhrer and his stinking wall (and Number 45's utterly lame-brained supporters...NSFW)…

…and Seth Meyers tells us about the latest antics of Generalissimo Trump and his pals (including RoJo) on alleged conspiracies (to say nothing of real ones), as well as the Rob Porter garbage…

…and while our tiny-handed orange dictator casually accuses those who oppose him of treason, I thought it would be instructive to bring you another installment of “This Day in Doomsy History” (more or less) from 2/9/10 (here), in which we note the 68th anniversary of former Repug U.S. Senator Joe McCarthy alleging that 200 employees of the State Department were communists, responded to brilliantly by David Strathairn channeling Edward R. Murrow in the following clip (with, of course, people whose lives and careers were in fact ruined with treasonous innuendo by calling them communists)…

…and Kyle of Secular Talk tells of our current regime trying to cut funding in renewable energy; clueless as always, and the Capetown, South Africa thing is really a great big WTF? story all right (NSFW once more)…

…also, Ana, along with Mark Thompson and Maytha Alhassen of TYT, tell us about Sheriff Oddie Shoupe in Tennessee taking down suspect Michael Dial (and deputy Adam West? Not at all funny, so I’m not trying to joke about this; I give the deputy…Adams?...credit for showing humanity and being distraught…I don’t know what this guy’s rap sheet was, but I still don’t think that justifies what happened…and yeah, the sheriff is that big of an a-hole…NSFW also)…

...and RIP John Perry Barlow of The Grateful Dead (here). 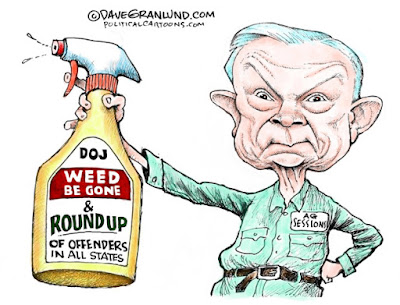 As I’ve said, pot should be decriminalized at a minimum, but legalization to me is a slippery slope; it should probably be treated just like alcohol, but the response from our “immunity gnome” of an AG on this is beyond a joke…

Jeff Sessions thinks the DEA is exaggerating the opioid epidemic — and is instead blaming cannabis pic.twitter.com/ytTWm2LFhC


…and kudos to Nancy Pelosi for standing up for the DREAMers – wouldn’t it be nice if the U.S. Senate Dems possessed the same backbone? I would guess this is part of the reason why conservatives hate her so much (and the fact that she’s a woman is just an added bonus as far as they’re concerned)...

Nancy Pelosi just set the record for the longest House speech in history as she held the floor to defend DREAMers pic.twitter.com/Jwn3bgGhnP

Trump says he wants a "bill of love" to protect Dreamers, and then turns around and uses them as hostages. pic.twitter.com/UBEsPqMsbU


…and Ari Melber talks with Jess McIntosh (and boy, is she right about mid-term elections!) and Gina Ortiz Jones (more here), running to unseat an apparently vulnerable U.S. House Repug in Texas (along with Repug electoral garbage going on in Scott Walker-stan as well as our own beloved commonwealth)…

…and it looks like the Gropenfuhrer, being the tin pot dictator at heart that he truly is, wants a military style parade – what a colossal waste of taxpayer $$ when so much in this country needs to be done (requiring common sense spending to fix)… 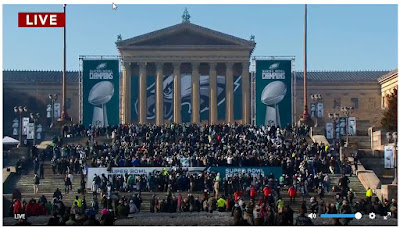 …well, as you may have heard, we had a little parade of our own here today for a certain World Championship football team that we know and love (well, most of us), and it put me in the mind to hear this tune. 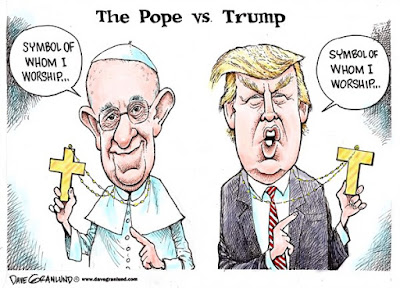 We need a new moral agenda where the poor and middle-class are lifted up, not left behind. pic.twitter.com/vRonnvOzpP


…and leave it to the Gropenfuhrer to claim that someone like this is allegedly “spiritual” (this idiot could be responsible for a public health emergency over this..."healed by his stripes"? WHAAAA???)…

‘Jesus himself gave us a flu shot.’ — Trump’s faith adviser says you can skip your flu shot pic.twitter.com/HM74DQZl6A


…and I have to stick to my principles a bit here and point out that, even though we’re talking about a celebration for our Super Bowl Champion Philadelphia Eagles (damn, it feels good to say that!), the BLM folks definitely have a point (vandalism is never OK for anybody)…

Why wasn’t Philly called a ‘riot?’ This is a racist double standard. pic.twitter.com/YP5sHt1Pb5


…and I’ll admit that this is a bit of a tangent, but while we all take the time to toast the Birds for pulling off the win in “Supe 52,” let’s not forget to give props to this guy pictured below – I remember how bad this team was before he took over, and though he didn’t get us to the proverbial mountaintop, he sure turned this team into a professional sports organization once more… 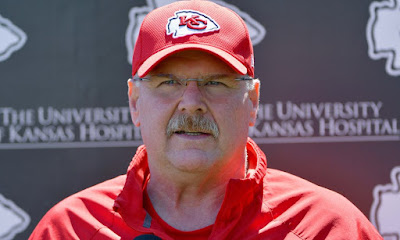 …returning to the news/political stuff, Michael Brooks tells us more about the line from Generalissimo Trump that "Americans are DREAMers too," along with that horrible and thoroughly exploitative political ad (more here, and once more, it was wrong of Wilson to show "Birth of a Nation," but he was conned into doing so - have to know the story...facts for sure at about 2:30)...

...and yeah, I think this bears repeating from Chris Hayes about the shenanigans of former FBI director James Comey during the 2016 presidential election (something to remember in light of this)...

…and while I was in Eagles green mode with my tunes over the last couple of weeks, I also didn’t acknowledge the birthday of Lucinda Williams, so I’d like to do so here.

Posted by doomsy at 2:04 PM No comments: 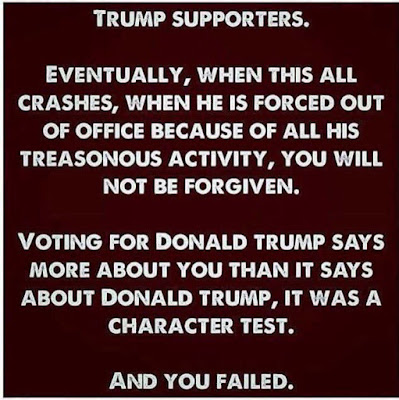 Isn’t it curious how those lemmings who still support Dear Treasonous, Tiny Handed Orange Leader have not a word to say about this, for the most part anyway?...

…and Cenk of TYT had some good analysis IMHO on the “$1.50” cluelessness from Mr.-Puppy-Dog-Eyes-With-The-Shiv…

…and for anyone who thinks the market isn’t paying attention, I give you this (and you know what? As far as I’m concerned, if you run your mouth and take credit when the stock market does well, you should take the hit when it does badly too, as noted here, though, to be fair, the market appeared to rebound today)…

…and I honestly believe that there is no bottom when it comes to the life form currently taking up space in An Oval Office – once again, heckuva job, all of you assclowns who had anything whatsoever to do with installing this despicable fraud…

…and Rachel Maddow tells us about the Dem rebuttal to the Nunes memo (with Dem U.S. Rep Eric Swalwell; the Gropenfuhrer apparently has 5 days to figure out what to do about it – yeah, nice try by team “D,” but do you seriously think he ISN’T actually going to punt on it?)…

...and while I was in Eagles'-tunes mode, I missed a couple of birthdays, including Melody Gardot. 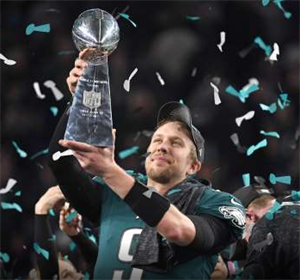 Unless you have endured all of the years of utter, abject futility with The Philadelphia Eagles, you cannot know how momentous their victory in Super Bowl LII (oh, screw it – 52!) truly is.

I mean, there were the years of Ed Khayat (as a coach – as a player, he was a member of the 1960 Eagles team, which was, until last night, the last one to win a championship), Mike McCormack, Marion Campbell as a head coach, Rich Kotite and the wet laminated clip board, to say nothing of big mouth Buddy Ryan, Cadillac dealership owner and team owner also (for a time) Norman Braman, Leonard Tose trying to sell the team to pay off gambling debts (who preceded Braman), Horst Muhlmann who was cut by Dick Vermeil because he didn’t execute an onside kick (nothing against Vermeil, though, I hasten to add), offensive lineman Ed George who literally held on every play, running back Lee Bouggess who couldn’t find an open hole in the line if his life depended on it (not that the Birds gave him that many to begin with)…I could go on and on.

But last night took care of all of that. And now, the fourth of the four major sports teams in Philadelphia (sorry if I’m slighting the Soul or anyone else), has WON IT ALL!!!!

Here is a clip on the festivities from the local Action News station (oh, and by the way, if you buy a Dodge RAM truck after this, then I have no patience for you)…

In case you missed it, Jim Gardner confirms that your Philadelphia Eagles are SUPER BOWL CHAMPIONS! 🏈🦅

It doesn't get more Philly than that! pic.twitter.com/Bqn0pVxM59

The Eagles won the Super Bowl — and Philly is going nuts pic.twitter.com/c5csc4e9z1


…and as far as I’m concerned, all the the Iggles are flying high right now, but I think there’s a special place for Chris Long…


…and I should probably return to my “bread and butter,” as it were, with this clip of Cenk on the alleged popularity of the tax giveaway from Generalissimo Trump and the Repugs…

…and Kyle tells us about the Gropenfuhrer’s latest lies, this time on prescription drug prices (NSFW)…

..and I only put this tune up one other time in 2008 because that was the only other time it was ever appropriate, and I’m ecstatic actually to be able to do it again. 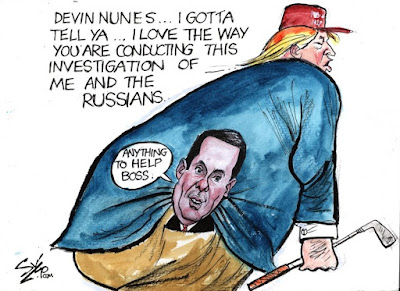 Chris Hayes tells us the latest on the Nunes memo (and good work too by Amy Klobuchar, but yeah, she bailed at the end on who she was wanted to win in LII - oh well)...

…and Rachel Maddow provided what I thought was some good follow-up on that subject with senior Dem on the U.S. House Intelligence Committee Adam Schiff - yet another nothing-burger from the "party of Lincoln"...

…and I think Dem U.S. Rep Pramila Jayapal is spot-on here (in response to Generalissimo Trump and the SOTU of course)…

The only wall that @RepJayapal wants to build is a wall of love. pic.twitter.com/LLw8ZLG2p6 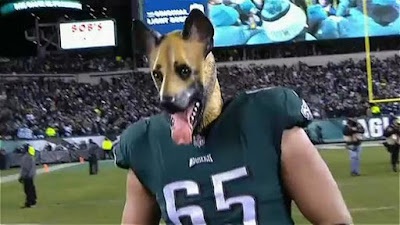 …and today’s the day, guys, at long last – we believe!

Posted by doomsy at 9:03 AM No comments: