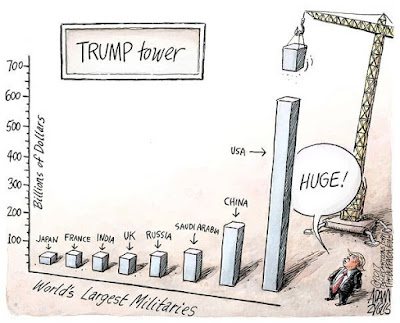 I get impatient with Fareed Zakaria of CNN since I think he dances across that pundit line between intelligence and idiocy with disturbing frequency, but I have to admit that he absolutely nailed it here on the matter of U.S. defense spending, as Kyle K. tells us (Kyle gets points for mentioning Smedley Butler, but he loses those points for also mentioning that fool Jimmy Dore)…

…and this clip is about a week old, but I think it’s still noteworthy unfortunately…Rachel Maddow tells us about a three-year-old forced to choose which parent to stay with, her father or mother, and yeah, this has to do with the border atrocities again (makes me recall the climactic scene of this a bit) – the family was ultimately allowed to stay in the U.S., but the medical circumstance on the part of one of the parents (heart surgery apparently) should have precluded any discussion about separation, and Maddow's report also notes the religious protests…oh, but please tell me again, New York Times and MSNBC, how Trump “won” the Mueller hearing and how it was a supposedly a great day for the GOP…we have a “president” who is completely and utterly compromised by a foreign hostile power – what planet do you people live on? And oh yes, “Old Gray Lady,” how I so crave your “Trump Voter In Trump Country” profiles (here) – definitely being sarcastic...

…and I would say that this is a completely apt wingnut response to the prior clip, unfortunately, from Sam Seder and the “Majority Report” crew…I think Sam is completely spot-on with his “wingnut self-help” theory…kind of scares me how well I know people like the ones profiled in this clip – not passing judgement of course since, as people, they’re no better or worse than I, but my God, are they brainwashed and misinformed!…

…and Ana and the TYT folks tell us about Daniel Leonard of Toms River, NJ, whose life apparently would be fulfilled if freshman Dem U.S. House Rep Rashida Tlaib were to be killed – oh, and for good measure, let’s make fun of Ilhan Omar again; if something is medically wrong with Leonard, then I hope he gets the help he needs, but as far as I’m concerned, he should be removed from his position on the school board and face prosecution for this…

..and speaking of Omar, I give you this in the annals of Repugs Behaving Badly, Part The Infinity as Charlie Pierce might say; this has to do with someone who has declared to run against the freshman Dem U.S. House rep (again, as with Leonard, if this person needs medical help, I hope she gets it, but if you have these anxiety issues, why would you even dream of a job in public life?)…

…and it looks like Robert Greenwald and Brave New Films have done it again, this time with a feature on voter disenfranchisement in Georgia; I’m old enough to recall the days when we would complain at the U.N. if third-world countries or even industrialized nations would pull crap like this…

…and wow, this sure is some Grade A snark aimed at someone in public life who deserves it by the truck load (and to help Sara Gideon, vying to be the Dem challenger against Susan Collins, please click here)…

…and I don’t know if all of this means that “moderation” is the watch word for the day or not, but I do know that this is a cool tune, so here it is. 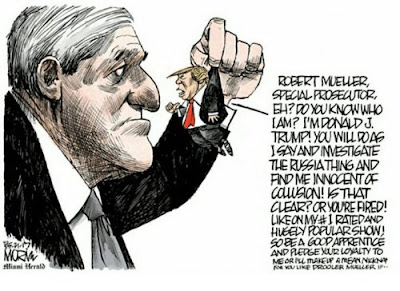 Apparently Special Counsel Robert Mueller, being the “by the book” guy that he is, pretty much steered whatever questions he got about Mango Mussolini’s obstruction and all-but-legally-provable collusion with Russia in the 2016 election back towards his report, but as Brian Tyler Cohen points out, that was still pretty damn incriminating by itself…of course, the Trumpsters will just yell that it’s all a plot to malign their hero and nothing more (and just how big a boob is Ken Buck anyway?)…

…and with that in mind, Robert Reich gives us the real reasons to try and remove the Gropenfuhrer (one of the most clear-headed cases I’ve heard yet in support of the “I” word)…

…and yeah, this is great – cops in Louisiana make jokes about AOC getting shot and rightly get fired…let’s see if these clowns get shuffled around to a police department somewhere else (as Cenk and Ana tell us)…

…and John I. of The Damage Report and Jordan Uhl tell us that Fix Noise thinks a $15 wage is funny (and no, you don’t tip at McDonald’s – I flipped burgers for them, so I can definitely say that; the real takeaway for me is the exchange by John and Uhl at the very end)…

…and Thom Hartmann speaks “across the pond” with Victoria Jones about Boris Johnson, the new PM of Great Britain (yep, it’s all playing out exactly the way our former ol’ buddy Vlad Putin wants...not sure how Thom could have forgotten about Roger Ailes)…

...and happy 75th birthday to guitarist Jim Armstrong of the band Them, with that singer who went onto a least a little bit of fame as a solo artist, you might say. 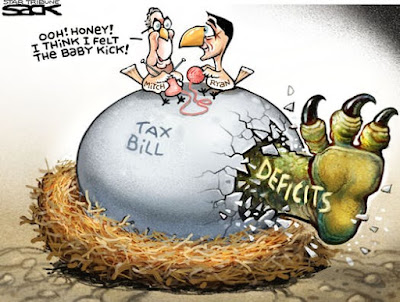 This clip from David Pakman includes one of the best discussions about the debit versus the deficit that I’ve heard in a long time; as I and others have pointed out many times before, this issue is something the Repugs use as a cudgel to go after Dems, but when the “party of Lincoln” has any control of government at all…crickets (story has to do with the Gropenfuhrer exploding the deficit to $1 trillion, an amount that is way beyond sinful as far as I’m concerned…not saying Dems are totally innocent on this stuff either, but as Pakman notes, Obama made some progress in cutting the debt down a bit before he was done)…

…and it looks like some life forms are getting rich over keeping kids in cages, believe it or not, as Kyle K. tells us (and why exactly are these entities considered “non-profit” if they’re pulling in this kind of dough, as Kyle asks?)…

…and it looks like vets in the weed industry have been denied home loans that were supposed to be guaranteed by the VA; I’m not all the way there yet on legalization for recreational use, but I’m there on everything else when it comes to pot, and this Repug/Trumpian policy is typical garbage (and kudos to Dem U.S. House Rep Katherine Clark of MA for fighting it)…

…and a hat tip goes out to David Corn on Twitter for reminding us that yesterday would have been the 75th birthday of legendary Dem U.S. Senator Paul Wellstone of Minnesota; this clip features a tribute from former Dem Senator Al Franken, and yes, I know he has been in the news today (here); I know there were multiple allegations against Franken, and that’s definitely not good, but I know that Franken asked for a Senate ethics committee investigation, but he was denied of that, and that’s not good either…

…and I think we’re going to get some heavy weather in these parts that will break up the heat a bit – hope everyone takes all the needed precautions and can find a cool place to ride things out for a while.

Posted by doomsy at 2:24 PM No comments: