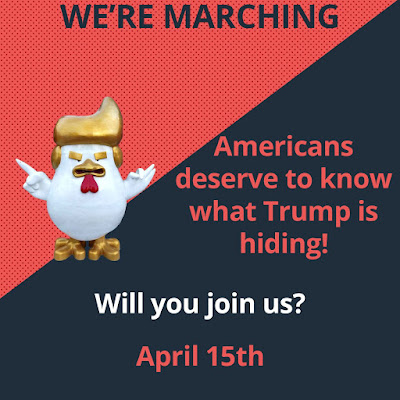 To find out more about a march in your area, please click here (and more is here, including David Cay Johnston on why this matters).

And maybe I’m putting my proverbial tin foil hat on and finding black helicopters or something, but I think it’s genuinely weird that I CAN’T FIND ANY FREAKING VIDEO ANYWHERE BY ANYBODY about this!

Well, when it comes to financial matters, I have to admit that I’m going back and forth a bit on this story, and maybe the bull artist (literally) has a leg to stand on, but sorry – I just don’t see that at the moment (and Matt Lauer makes a funny - tee hee...GMAFB)…

…and speaking of financial matters, if Repug U.S. House Rep Markwayne Mullin of Oklahoma had any brains, which he apparently doesn’t, he would have kept his mouth shut about his salary – see, Thom Hartmann used that Google thingie to find out exactly WHO DOES pay him besides the salary he draws for existing as a shameless corporate shill, and yeah, it’s about as bad as you might imagine (starts off with the United Airlines story of the doctor dragged off the plane)…

…and in case anyone thought Repug idiocy was exclusive to the U.S. House, Kyle K. tells us about a guy in the North Carolina state house who found a way to equate Abraham Lincoln with Hitler – for real (NSFW)…

…and Rachel Maddow tells us here about “immunity gnome” and coward Jeff Sessions (can’t take credit for that nickname) and the case of Maribel Trujillo, who was snatched up by ICE apparently for the “crime” of being a loving mother and caring for her daughter (can’t imagine how those cretins at ICE can draw a breath without pangs of guilt…don’t know why our side can’t do a better job apparently of drawing a line between horrors like this and the wingnut “sanctuary cities” garbage)…

…and I don’t have anything particularly brilliant to say about this, but I only want to point out how hilarious this tweet is from Cliff Schecter in response (re, Ben Carson getting stuck in the elevator while Alonzo Mourning waited)…

…and returning to the “Gropenfuhrer,” I love Rick Wilson’s takedown of Eric Trump, who has no business even being in any kind of a political dialogue (“The emerging picture about Russia never gets better for them – it always gets worse.” Indeed)…

.@TheRickWilson reacts to Eric Trump’s claim the Syrian airstrikes are proof his father doesn't have ties to Russia. https://t.co/WPj9sORp7F pic.twitter.com/hWlnpJms3H


…and Joy Reid tells us about Trump health code violations at Mar-a-Lago (and why is that oddly appropriate?)…

…and partly with tomorrow’s marches in mind, I give you the following tune (we did better than expected this year – hope you do and did too).

Posted by doomsy at 2:35 PM No comments: 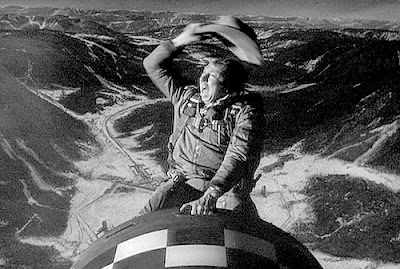 Oh wow, it looks like Generalissimo Trump dropped a great big bomb half a world away (the context that matters as far as I’m concerned is here...and $16 million for this monstrosity?). I guess he sure is “presidential” now, isn’t he, Fareed and Bri?


…and here is Rachel Maddow’s “A” block last night (it’s more than just the fact that Trump is a liar – it would be “news” if he actually told the truth about something, anything! – but anyone who spouts the easily-provably-wrong nonsense that he does can’t be playing with a full deck, including his statement that our military isn’t in Syria when they very definitely are, and very much in harm’s way…also, what does it tell you that what is essentially a politically Communist government in China does a better job of communicating with its citizens than this bunch that currently occupies An Oval Office? And the segment Maddow teased at the end had to do with Rex Tillerson’s total non-response while the Russian foreign minister berated reporter Carol Morello of the WaPo, which is again typical for these cretins - the Trumpsters I mean...don't know why this is surprising given how this bunch treated reporters during the campaign last year)…

…and “President Jackass” works for me too…

…and it looks like we have a wingnut circular firing squad among the Trump supporters and President Tiny-Handed Egomaniac over his Syria attack, which he probably was trying to push off the front page with today’s development - pass the popcorn...

…and Kyle K. tells us about Jeremy Scahill giving our corporate media the treatment it deserves over the Syrian air strike (NSFW)…

…and I don’t know if you can classify this as “world” music or not, but I think it sounds pretty damn good. 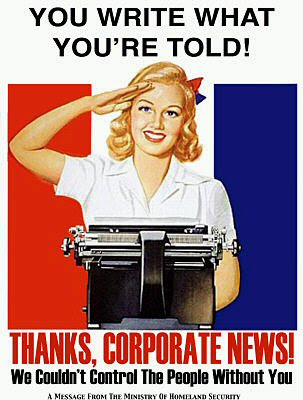 If there was ever an occasion in which our corporate media deserves nothing but ridicule, it’s over Generalissimo Trump’s most recent Syrian missile strike, as K.O. forcefully points out (NSFW)…

…and yeah, it’s nice to see that scumbag Wilson get what he truly deserves here…

The GOP politician who yelled 'You lie!' at President Obama just found out karma's a bitch pic.twitter.com/MnLoZlxWj1

…and that would be Joe Wilson, the charter member of the “WWADD” party (Bill Maher explains here – NSFW also)…

Update: I have a feeling that I'll be adding a lot to supplement this video, and my first item is here.

…and again, to help elect Jon Ossoff for Georgia’s 6th congressional district, click here (and as you might expect, the Repugs are dumping all of the slime they can generate over him because they don’t have any good ideas, or motivation even, to help solve the problems they primarily created – the only way they can hold onto power is through games and nonsense because their policies are garbage…let’s defeat that for a change, people, OK?)…

…and I give you once more “This Day In Doomsy History” from 4/12/16 here (just a short trip this time to relive once more Sam Bee’s adventures with Eddie The Eagle of the NRA…maybe a bit inopportune to put this up in light of the latest San Bernadino shooting, but I don’t think there should be a moratorium on ridiculing the NRA for continuing to act as purveyors of death and destruction)…

…and RIP J. Geils of The J. Geils Band, of course.

Posted by doomsy at 9:45 AM No comments: 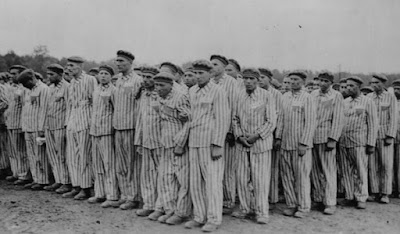 So exactly which “Holocaust center” are we talking about, Spicey? Buchenwald? Dachau?

And yes, he apologized, but this is mind-numbingly stupid even for a “Trumpster” (the Holocaust Center is a MEMORIAL, not the place where these horrors actually took place, you transient speck of poo)…

Watch Sean Spicer trip over his words after saying that Hitler didn’t use chemical weapons in ‘Holocaust centers’ pic.twitter.com/E92QIOlVCf


…and I thought this was a particularly good segment from Rachel Maddow last night about how the FBI wants to question a Russian hacker who was apprehended in Spain and, apparently, was involved in the presidential campaign of Generalissimo Trump…

...and just remember that this is yet another time not to politicize gun violence (removing my tongue from my cheek - and in a related story, if this woman is found guilty, she should get sent up for a LOOOONG time)...

…and here is an ad for Dem Jon Ossoff, running in Georgia’s 6th Congressional District (election is a week from today)…

…and yeah, right from today’s headlines, as they say – the story is awful for all of the reasons noted by Jimmy Kimmel, but good job to make humor out of this mess (and why is this not surprising? And do you know his ratings have actually been pretty good since that NY Times story - never a shortage of mental defectives in this country, apparently)…

…and does this put you in the mood to hear a song about air travel? Well, too bad – here it is anyway (and this year marks the 40th anniversary of this tune, for what it’s worth).

Posted by doomsy at 6:05 PM No comments: 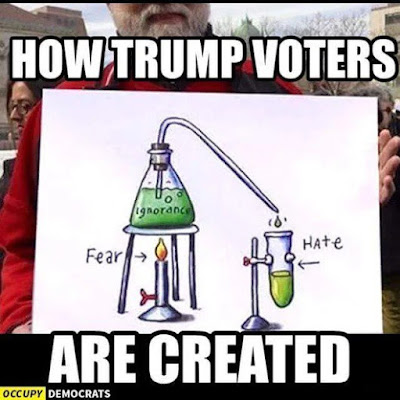 I give you Repug Rep Jody Hice, who claimed that God believes America should be a white Christian nation by birthright, apparently (I guess Native Americans didn’t get the proverbial memo - more on David Barton is here)…

'This is our country, this is our turf' — this politician thinks God gave America to the Christians pic.twitter.com/MH78FGUcPQ


…and echoing that, Kyle K. tells us that the “fundies” believe that Generalissimo Trump was chosen by The Almighty – I wouldn’t be too sure of that (NSFW)…

...and K.O. tells us what we’d be looking at if we tried to stage a new election (and he’s absolutely right about voting out everyone in the “Trump party” until we get a chance to do that for real in 2020, assuming events don’t intervene somehow before then...and I don't mean a VIOLENT event, I hasten to add)… 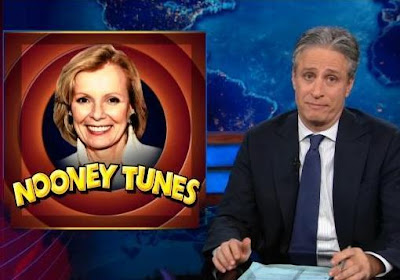 …and what a pathetic joke that “Nooners” actually won a Pulitzer Prize (here…and how ridiculous is that comment about the alleged IRS Obama “scandal” given what’s going on with President Tiny-Handed Egomaniac…David Fahrenthold definitely deserves it, though – nicely done)…

NowThis exclusive: @BernieSanders on the fight to make college affordable for all Americans pic.twitter.com/8jT7dfE66K


…and happy belated 70th birthday to Steve Howe of Yes.