And all for the sake of pre-empting a primary challenge from a Teahadist, particularly in the case of Sen. Mr. Elaine Chao (here)…


…and this tells us that, as usual, the Congressional Repug “leadership” is lying about Obama and spending (“cutting spending” being a right-wing dog whistle for gutting Medicare and Medicaid and privatizing Social Security, of course)…

…and leave it to our crack press corps to…uh…no, let me guess…what exactly is it again that they do…


The Sequester Explained - watch more funny videos
…and as for Number 44, I think he needs a refresher on pop culture based on this (just kidding – honorable mention for taking a shot)…

…and I guess the weekend is time for a guilty pleasure – I think this kid is a pouty little brat, but this is a nice tune, I have to admit.

Posted by doomsy at 9:37 PM No comments:

Thank God Elizabeth Warren is in DC to point out just what kind of a sweet deal the banksters are getting still; would that we had more of this kind of representation all along – Bernanke wouldn’t be who he is and where he is unless he was an expert at double talk (here)…

…and with Scalito’s antics with the Supremes on the Voting Rights Act, it’s important that we don’t let Hangin’ Judge JR off the hook either (and with all due respect to Rep. Clyburn, he needs to bring the same urgency to the table that Martin Bashir does here)…


…and really, “Booby”? Number 44 is as bad as this guy (and I’m totally ignoring Fix Noise “Democrat” Pat Caddell, which is what he deserves)...

...and this was released 30 years ago today - here is one of the hits, as they used to say.

Posted by doomsy at 8:41 PM No comments: 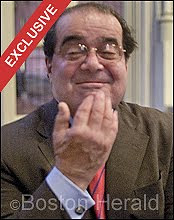 Rachel Maddow has a timely history lesson, particularly so given this repulsive development…


…and returning to the "sequester," here is some more reality from Former Clinton Labor Secretary Robert Reich (making more sense in about five minutes than any Sunday morning pundit idiot could make in an hour)…

…and with an opposing point of view (giving him too much credit I guess), Bryan Fischer continues to “bring the crazy” here (A “vulture”? Moi?)…

…and now, time for a big change of pace; RIP Van Cliburn (a bit of culture once more).

Posted by doomsy at 8:55 PM No comments:

When it comes to the “sequester,” welcome to the “new normal,” as Rachel Maddow explains…


…and Martin Bashir talks to Dana Milbank and Philadelphia Mayor Michael Nutter about the upcoming gun votes in D.C.; cute of Milbank to stick in the fact that there are cowardly rural Democrats in the Senate on the gun issue, which is true, but there are a hell of a lot more bought-and-paid-for Republicans – trying not to be too obvious with my disgust over the fact that, as usual, the NRA made sure their toady politicians “let the air out of the ball” and drained the momentum (and by the way, here, at last, is some sanity on this issue)…


Update 3/1/13: This strikes me as darkly humorous, though I guess it shouldn’t.

I guess David Keene and Wayne LaPierre will now have to create a National Bullet Association; I’m sure their fundraising will be a windfall for “red state” and some “blue state” Repug politicians all over the country. And their motto? “Bullets Don’t Kill, People Do,” of course.

…and Michael Shure, sitting in for Cenk Uygur on “The Young Turks,” marks the 1-year anniversary of the death of Trayvon Martin with Brown University professor Tricia Rose…

…and I thought tonight was a good time to give “mellow” the night off.

Posted by doomsy at 7:48 PM No comments:

RIP former Surgeon General C. Everett Koop – the Reaganites wanted him to be just like them, but he changed and evolved over time, as all intelligent adults in a position of leadership are supposed to do…

…and John Nichols of The Nation brings us great stuff on the “fix the debt” con that is being perpetrated here, with this guy being one of the supposed “centrists” giving it more “cred” than it deserves; there was a real stink in these parts recently when this came to light with Rendell and his former right-hand man, David Cohen (when Rendell was mayor of Philadelphia), deciding to support Tom “Space Cadet” Corbett here; I wish I could say I was surprised…yes, Rendell and Cohen, along with former City Council president and eventual mayor John Street, did some good way back when, with the help of some altruistic union cave-ins, but when push comes to shove, they’re “bottom line” guys, and I guess they figured out that the “dark side” paid better and it was time to cash in…

…and speaking of bottom-line guys, let’s try to “soften up” Sen. Mr. Elaine Chao so he looks more vulnerable to a Teahadist takeover (here); let them knock off McConnell and save us the trouble, to say nothing of saving the money…

Update 2/26/13: And by the way, speaking of McConnell…I try not to participate in spats between lefties, which are dumb, counter-productive…you name it…but as much as I admire Think Progress, I think they’re off base here; yes, Progress Kentucky walked a fine line by pointing out that former Bushco Labor Secretary Elaine Chao, who may very well go down as the absolute worst Secretary of Labor this country has ever seen, did her level best to send as many good-paying jobs in this country to China as she could, but I don’t think pointing that out is necessarily “racist.” If she had been African American and she’d sent jobs to, say, Ghana, would pointing that out be racist too?

The bigger issue I have is that, while it’s emotionally satisfying to take another shot at Chao like this for the upheaval and ruin she caused among an untold number of workers and their families in this country, the fact of the matter is that she’s been out of public life for over four years. Unless she pops up somewhere in the wingnutosphere to try and practice some revisionist history, I think we’re obligated to let bygones be bygones.

…and George Harrison would have been 70 today.