I thought this was a pretty good wrapup of the recent Washington insanity from Reverend Al, Joe Crowley, and Melissa Harris-Perry…

Update 5/24/13: Yes, I know this is a starkly serious topic, but would it be too cheeky on my part to say that Gohmert is a subject matter expert in this area (re., brain-dead life forms)?

…and I’m tempted to use this great commentary as a spring board into my personal tale of misery with Chase Bank, but don’t worry – I won’t burden anyone with that; only a little worse and a lot better than the stuff Dave Ramsey describes here…

…and I’ll let Bill Maher get the last word (here)…

…and this isn’t how I really feel – just a good tune (video’s OK too).

Posted by doomsy at 9:34 PM No comments: 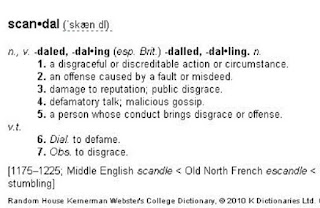 Consider this graphic as something informational for the benefit of our lap dog Beltway corporate media, since, by their actions this week, they apparently don’t know the meaning of the word…

…and I’m not going to tell you that I buy every single word of this report (particularly the debt stuff considering the bar graph in the third clip here), but I thought this from RT provided some context on the damned sequester that I don’t see anyone else reporting…

…and even though this commentary is a bit wonky, and I think he’s a little too hard on Nancy Pelosi (oh, right - "balance"), Lawrence O’Donnell provides the best reporting that I’ve yet heard on the stuff about the IRS and those zany Teahadists (and that struck me as a polite rebuke of Rachel Maddow for saying that “Man Tan” Boehner isn’t very good at his job, even though I think she’s right)…


…and speaking of TRMS, OMIGOD, IT’S ANOTHER OBAMA SCANDAL!!! HE ACTUALLY DID A BETTER JOB THAN WE THOUGHT ON SOMETHING!!! QUICK, CALL JONATHAN KARL AT ABC NEWS!!!...


...and happy belated 60th birthday to Mike Oldfield – better pack a lunch for this one (still have that image after all these years of Max von Sydow in silhouette holding that black medicine bag).

All right, I’ll admit that the Obama/AP thing needs to be investigated. And a shield law needs to not be obstructed by Republican jokers in Congress and signed into law by Number 44.

But before we get all “OBAMA IS AS BAD AS NIXON!,” let’s remember what his predecessor did when it came to a free press, as noted here, OK? And let's not forget this too…

…and let’s also not forget how PA’s own Tom “Space Cadet” Corbett brings his own brand of gubernatorial patronage, a la Dubya in Texas, to our beloved commonwealth…

…and with all the harrumphing and umbrage festivals going on against the Obama Administration from all quarters, it looks like Christmas has come way early for those zany Teahadists…

…turning to music, today would have been the 100th birthday of jazz and popular music legend Woody Herman…

…and from the “And now for something completely different” file also, I give you this.

Oh, so we have to put up with all of this faux, pearl-clutching outrage over the IRS Tea Party “scandal”?

As Jeffrey Toobin pointed out in The New Yorker here (and as I noted last night), the Citizens United ruling unleashed a flood of primarily conservative “social welfare” groups applying to the IRS for 501(c)(4) status. What the IRS did was admittedly ham-handed, but the agency was trying to screen these groups to find out what they were really up to.

In the meantime, let’s recall that I heard not a word of Republican complaint when the Bushco IRS targeted the NAACP and Julian Bond for their opposition to Dubya’s Not-So-Excellent Adventure in Iraq, as Martin Bashir and his guests remind us in the clip.


Update 5/16/13: Oh, and here are more folks targeted by the IRS who the Repugs, Fix Noise and the "axis of stoo-pid" don't care about.

Update 5/21/13: Oh, and did you know that Dems were also targeted in the IRS sweep that caught up the Teahadists? Didn't think so (here).

…and I know I’m a little late with this (and welcome, Steve Kornacki, taking over for Chris Hayes on “Up”), but this tells us, among other things, how the Repugs (in addition to totally alienating “undocumented” workers) have also thoroughly put off an entire demographic of young women voters; they have no one but themselves to blame (sorry it's a little late and I don’t know what that story is that Kornacki refers to at the end – “child care costs more than college in most states” is pretty mind-blowing)…


…and yeah, I think “Deadeye Dick” Cheney criticizing ANYONE on foreign policy means that we are now officially “down the rabbit hole”…

…and these guys just keep cranking out great stuff like this.

Oh my, the scandals real and/or alleged are just piling up like crazy these days, aren’t they?

Well then, here’s what you need to know:

You want to hear about a scandal for real? Chris Hayes tells us about it…


…and here is some good news – does this mean now that, FINALLY, we can do away with this austerity crap? And yes, I know the answer, but I’m keen to ask anyway – sigh (and if Bloomberg is so damn worried about the retiring baby boomers, just start screeching about getting rid of the ceiling on earnings subject to Social Security withholding)…

We’re not giving up either…

…and here’s another reason why, as if we need one…


...and I sure hope so regarding “Calgary” Cruz…

…and let me guess – this is about the drummer, right?

Posted by doomsy at 9:02 PM No comments:

Bill Maher brings the populist rage here – more like this…