(This is probably a first for me as it turns out, but this is what you do when juggling medically-related stuff such as what I’m currently dealing with...and again, posting will be sporadic, though I did manage to post over here also).

Posted by doomsy at 6:03 PM No comments:

As a tribute of sorts to former NYC mayor Rudy 9iu11ani based on this, I present the following from Lois Griffin…

…”Worst Persons” from Thursday (Michael Steele talks trash while he rakes in the dough from a book deal that is, in all likelihood, a violation of RNC ethics rules…didn’t know the RNC even had ethics rules – color me shocked!; Glenn Beck articulates more delusions about how Bushco supposedly conducted “open” press conferences – yep, those nice men in their white coats with the butterfly nets are surely closing in; but Sherman Frederick, publisher of the Las Vegas Review-Journal, gets it for mangling facts in an Op-Ed attacking President Obama – as Spencer Ackerman noted in the Think Progress post linked to previously, "You actually need to give President George W. Bush credit for this. The Bush people did a wonderfully effective job of making it verboten in mainstream political discourse to consider the deaths of 3000 Americans on 9/11 in any sense Bush’s failing" – sad, but true)…

…and I present this number in honor of what would have been the 75th birthday of “The King.”

I guess there really are no other serious options left, are there? (h/t The Daily Kos)...

...and I guess the online award for a production such as this one from Jed Lewison of The Daily Kos would be a "Webby"; if so, he certainly qualifies (here)...

...and Rachel Maddow reports on typical Repug opposition to a new Consumer Financial Protection Agency aimed at trying to curb the excesses of our supposed financial wizards, led by Sen. Robert Bennett of Utah (yeah, I don't know about you, but golly, I sure miss that ocean sludge - everyone should listen to every single word that Harvard Law Professor Elizabeth Warren has to say)...

...and is that Philly Mayor Michael Nutter playing "the ax" here???

Update 1/15/10: Aside from the ridiculously benign treatment the teabaggers get in this New York Times article, the "takeaway" for me here is that there are nine Repugs vying for the right to oppose Patrick Murphy (and as noted, it would be 10 if Jay Russell declared also - no word on whether or not Mikey Fitzpatrick was one of the participants).

(Also, I keep forgetting to note that I posted stuff here also.)

Update 1/15/10: More nice work by people from '09 who apparently are not part of Klein's Democratic "base" is noted here.
Posted by doomsy at 8:22 PM No comments:

God, I hate it when someone who is actually good leaves government; I didn’t mention Sen. Byron Dorgan much, and that’s because I can’t recall a time when he didn’t do the right thing – as noted here, there is indeed no positive way to spin this (and the clip from 1999 below shows his true prescience, notably lacking among others in that supposedly august body – thanks for all you’ve done, Sen. Dorgan)…

Once again, posting is going to be an issue because of my current adventures with our health care system and workers compensation, but I'll do what I can.

And even though it is now 2010, we of course are still preoccupied with health care reform (pretty safe to say that Ezra Klein has forgotten more about this issue than Flush Limbore will ever know...maybe one day, I'll try to put the collective experience I'm now acquiring on this issue into a post or two)...

...and here's something a little mellow to share while we keep from freezing our asses off.

Posted by doomsy at 1:33 PM No comments: 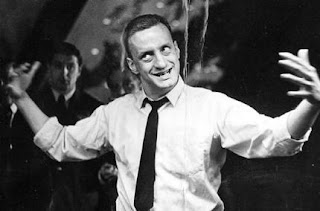 (By the way, there’s a reason why I’m not a medical professional – my self-diagnosis of a wrist sprain turned out to be incorrect. In truth, I have a broken arm…peachy. For this reason, posting will be highly problematic for a little while.)

As noted here, we learned the following from retired General Thomas McInerney recently (in the matter of the would-be “pants bomber” on Flight 253)…

McInerney: Because I believe that in the next 90 to 120 days, there is danger, a very high probability that a U.S. airliner will come down because of one of these bombers. And so, we've got to go to more than just the normal process that they're talking about now, we have got to go to very, very strict screening, and we have to use profiling. And I mean be very serious and harsh about the profiling. If you are an 18 to 28-year-old Muslim man, then you should be strip searched. And if we don’t do that, there’s a very high probability we’re going to lose an airliner.

Yeah, you know what, Former General Tom? I think we should do more to help al Qaeda in its recruiting efforts, instead of, you know, waging the legitimate war on terror (as opposed to the phony one in Iraq when we blew that country to bits) with common sense and adherence to the rule of law, and by doing so, showing up al Qaeda for the murdering cowards that they truly are.

And I just wanted to remind everyone that, if McInerney sounds familiar, it’s probably because he was one of the generals noted in this Pulitzer Prize-winning story by David Barstow of the New York Times about the military analysts who pontificate on TV about the wars in Iraq and Afghanistan under the guise of objectivity, when in fact they run businesses that depend on access to the very Pentagon officials they are tasked to critique (time for yet another blogger ethics panel, it would seem).

Though many analysts are paid network consultants, making $500 to $1,000 per appearance, in Pentagon meetings they sometimes spoke as if they were operating behind enemy lines, interviews and transcripts show. Some offered the Pentagon tips on how to outmaneuver the networks, or as one analyst put it to Donald H. Rumsfeld, then the defense secretary, “the Chris Matthewses and the Wolf Blitzers of the world.” Some warned of planned stories or sent the Pentagon copies of their correspondence with network news executives. Many — although certainly not all — faithfully echoed talking points intended to counter critics.

“Good work,” Thomas G. McInerney, a retired Air Force general, consultant and Fox News analyst, wrote to the Pentagon after receiving fresh talking points in late 2006. “We will use it.”

The group (of analysts) was heavily represented by men involved in the business of helping companies win military contracts. Several held senior positions with contractors that gave them direct responsibility for winning new Pentagon business. James Marks, a retired Army general and analyst for CNN from 2004 to 2007, pursued military and intelligence contracts as a senior executive with McNeil Technologies. Still others held board positions with military firms that gave them responsibility for government business. General McInerney, the Fox analyst, for example, sits on the boards of several military contractors, including Nortel Government Solutions, a supplier of communication networks.

And as noted in this prior post, Gen. Marks’ case was particularly egregious since he had been tasked to find the WMD in Iraq prior to the invasion, eventually discovering that they didn’t exist, but he kept hyping the war anyway.

The full dimensions of this mutual embrace were perhaps never clearer than in April 2006, after several of Mr. Rumsfeld’s former generals — none of them network military analysts — went public with devastating critiques of his wartime performance. Some called for his resignation.

On Friday, April 14, with what came to be called the “Generals’ Revolt” dominating headlines, Mr. Rumsfeld instructed aides to summon military analysts to a meeting with him early the next week, records show. When an aide urged a short delay to “give our big guys on the West Coast a little more time to buy a ticket and get here,” Mr. Rumsfeld’s office insisted that “the boss” wanted the meeting fast “for impact on the current story.”

And by the way, as noted here, McInerney accused liberals and Democrats in general of “aid(ing) and comforting the enemy.”

Well, at this point, I usually respond with some kind of a dig or smartass remark, but instead, I’ll merely give my fingers a rest and embed this appropriate video instead (and yes, that is Richard Branson).

Update 1/5/10: I forgot about this choice item concerning McInerney.
Posted by doomsy at 1:14 PM 2 comments:

I'm not sure how much I'll be posting over the next few days since I'm mending a bit from a wrist sprain (unless I can figure out how to type with my toes), but for now, I think this speech by Charlie Chaplin from "The Great Dictator" is a nice meditation to kick off 2010, which largely resonates to the moment IMHO (to offer some background, it should be noted that the film was released in October 1940, before the U.S. officially entered World War II, even though the war in Europe was definitely "on" at that point).

Posted by doomsy at 9:55 AM No comments: