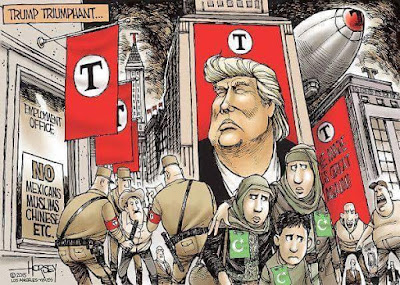 “It’s too much lying and too much Russia and too much smoke,” indeed – all of this absolutely screams for an INDEPENDENT special prosecutor with subpoena power (here)…

Shorter Shep Smith: THIS IS NOT NORMAL pic.twitter.com/nQQk2jy03Y


…oh, and by the way, don’t look now, but the U.S. has “boots on the ground” in Syria; gee, I guess I must’ve been asleep during the robust congressional debate that no doubt preceded this worrisome development (here)…

U.S. ground forces have been ordered into Syria pic.twitter.com/4O3HWlK7GB


…and this tells us about Dem Jon Ossoff, running to provide some honest-to-goodness representation to Georgia’s 6th congressional district, taking over for that scumwaffle Tom Price who is now DHS secretary under President Big Orange Cheetoh (and of course the video shows a typically slimy, stupid ad by the Repugs in response, totally devoid of anything related to actual issues as you might expect)…

This 30-year-old candidate for Congress could be a wake-up call to Trump's America pic.twitter.com/Embi6V1p5t


…and Sen. Elizabeth Warren speaks on behalf of maintaining accountability for the “Every Student Succeeds Act” (ESSA), which of course the Repugs want to get rid of (glad to see Warren sticking it right in the metaphorical ear of Huckleberry “Long Overdue” Graham…also nice that Warren managed to say all of this without being silenced)… 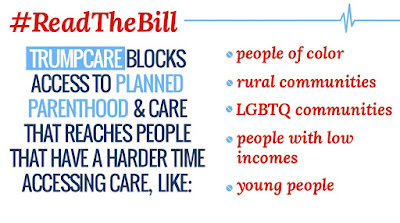 …and yeah, AETNA is lying also about the “death spiral” talking point, as you might expect (more here and here)…

...and John and TYT tell us about the deja vu with the Repugs and their typically idiotic arguments against the Affordable Care LAW (you know, the one the High Court of Hangin' Judge JR upheld TWICE, you idiots! And yes, Mick Mulvaney and Mark Meadows are a couple of lying sacks of shit)...

…and Keith Emerson of ELP died a year ago tomorrow.

Posted by doomsy at 1:51 PM No comments: 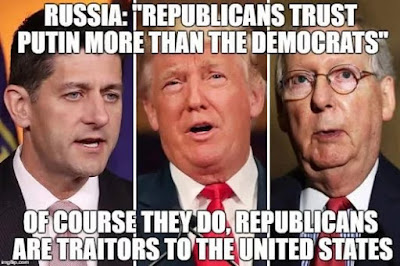 K.O. is out with #44, taking apart the SOTU speech in which the “Gropehfuhrer” supposedly became “presidential” (GMAFB)…

…and as noted in the video, Khizr Khan cancelled a Canadian appearance because his travel privileges are apparently being “reviewed” by the Trumpsters (typical)…

…and good for Joy Reid and the Rev. Dr. William Barber here…

...and yeah, gotta love this too (in humor there definitely is truth)...

…and gee, could Secretary of State Rex Tillerson be MORE of a figurehead, I wonder (and yeah, I know I've gone after "Mrs. Greenspan" in the past when she's tried to be a pundit, but really good work here on her part)...

...and Kyle K. tells us that the WHO announced recently that pollution kills about 1.7 million kids a year (great point about comparing this to ISIS – NSFW)…

…and speaking of kids, I think this is a heckuva story about a statue of a little girl that appeared seemingly out of nowhere on Wall Street…

A new statue of a little girl is staring down Wall Street's charging bull #NowWomen pic.twitter.com/kotvtxncqe

...and I think there's great advice in this song for kids of any age.

Posted by doomsy at 3:54 PM No comments: 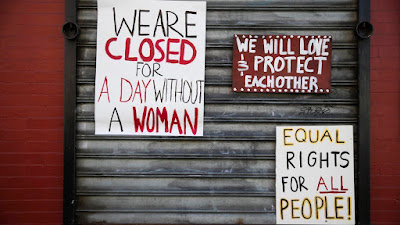 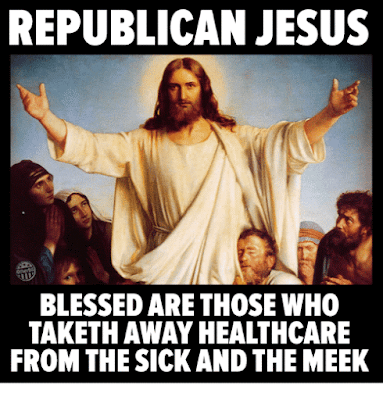 ...and Robert Reich tells us about the Repugs and their attempt yet again to destroy the Affordable Care Law (here)...isn't hard to imagine why the Repugs demonize on this issue...

What's the real reason the GOP wants to repeal Obamacare and substitute a fake replacement? Watch our video and find out, and please share. pic.twitter.com/B96U1TKLnl


…and I never thought much of Robert Costa to be honest, but I have to admit that this is great stuff (and thoroughly troubling, of course)...

...and when it comes to anything remotely approximating equality, as noted here, EVERY DAY might as well be a "Day Without A Woman" at Fix Noise...

This is how Fox News talks about women: #InternationalWomensDay pic.twitter.com/pCyzeNoIUl


...and this tells us about the related protest in NYC (and I’m sure those stats are replicated across most of the rest of this country)…


...and here is a tune for the occasion. 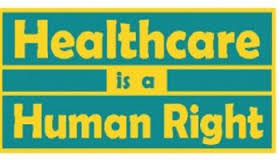 …and you need an emergency appendectomy? TOO BAD, since you were dumb enough to buy that new iPhone a day or so ago, according to House Republican numbskull Jason Chaffetz (here...and an AWESOME related tweet from Jason Kander is here)…

Republicans want you to choose between having healthcare and having a phone pic.twitter.com/sMXRcGmr8i


…and here’s Rachel Maddow’s “A” block about Trump and some other shadowy character in Azerbaijan; once more, great stuff (more here)…

…and K.O. is back to warn us yet again about what President Tiny-Handed Egomaniac could yet concoct against us – the last minute or so is pretty damn scary; once again, heckuva job all of you clueless fools who helped to bring this nightmare to hideous fruition…

…and when all else fails, I know the Repugs can try that “community outreach” thing again to win hearts and minds, as they did here in 3/5/09 or thereabouts…yeah, you know it, you love it – time for another installment of “This Day In Doomsy History” (more or less)…

…and happy 50th birthday to drummer Randy Guss of Toad The Wet Sprocket (this should be the theme song for the “Trumpsters”). 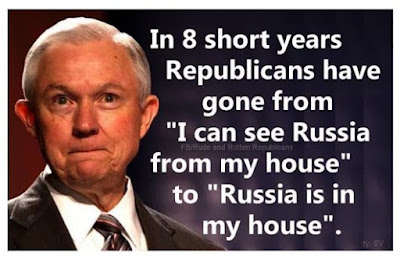 Great stuff by Kate McKinnon of SNL here (wow, Lorne Michaels is actually sharing SNL videos on YouTube...does that mean the other three horsemen are saddling up?)...

..and Rachel Maddow tells us about the latest between President Big Orange Cheetoh and the Russian Fertilizer guy (more here) – I realize her show had to go into “carnival barker” mode during the campaign last year to please her corporate overlords at Comcast, but now that that nonsense is over (not having gone the way we want, of course), TRMS has gone back to what it does best and that’s craft quality journalism, and they’ve been “crushing it” on a regular basis - all of this garbage with President "Donald Drumpf" is eventually going to come together, people)...


…and Kyle K. tells us about an Arkansas state senator trying to ban books by historian Howard Zinn – what country am I living in again? (NSFW)…

...and sometimes my for-profit activities get in the way of this whole blogging thing - this was definitely one of those days (and yes, I know what this song is about - definitely won't "go postal," people).