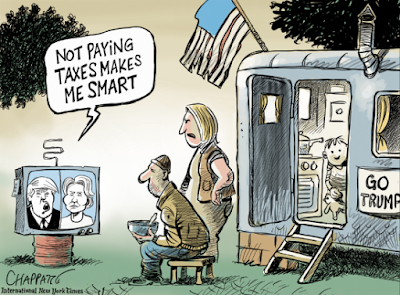 Fix Noise should just rename itself as the American Pravda channel and make it official (as Bill Maher has said, all is forgiven if you have the "magic R" after your name)…

Fox News HATED the idea of Obama talking to foreign dictators. Guess how they feel about Trump doing it??? pic.twitter.com/gUBxfMa2dl


…and gee, it looks like “Lady Skeletor” broke the law, namely the Hatch Act; imagine that, a Trumpster not playing by the rules (OK, snark mode off…and oh, I guess I’m just a snotty lib to make fun of her appearance – all I can say in response is that I knew what this woman was all about after listening to all of the drivel she used to spout on “Real Time” long before she became a Trumpette…besides, she’s routinely ridiculed our side in worse ways...and I'm sure the Huckabilly Sanders remark at the end is tongue-in-cheek)…

…and Rachel Maddow tells us the latest on Russia hacking our infrastructure (God, is this story scary – makes it more critical that we stop screwing around and do something in response, but good luck on that with our Tiny Handed, Treasonous Orange preznit…)…

…and RIP Dem U.S. House Rep Louise Slaughter, a tireless advocate for her constituents…the clip below is from February 2010 as part of an effort (which turned out to be successful) to get the ACA passed into law (I think the part about the woman being forced to wear her dead sister’s dentures, of all of the other important stuff in this clip, was my biggest takeaway, and a jarring one at that as you might expect…God, Obama was so young, with so much obstruction yet to come)…

…and Seth Meyers gives us a wrapup of the week; like the remark about the sneeze guard around Mexico, mainly to point out the absurdity of the whole damn wall thing – love Seth’s reaction to the audience reaction to the Chris Matthews remark also (seriously, though, when the hell is someone going to cart Generalissimo Trump away a la Anthony Hopkins/Hannibal Lecter in “Silence of the Lambs”?)…

…and on this St. Patrick’s Day eve, I have to admit that I’m having a hard time getting my head around the fact that Dolores O’Riordan is no longer with us.

Posted by doomsy at 2:18 PM No comments: 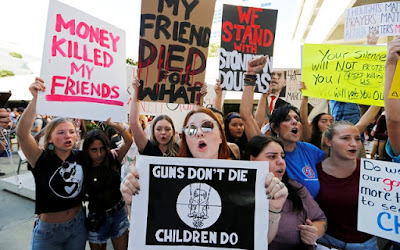 I suppose that if the cretins among our elected officials supporting the NRA were capable of feeling shame, this would make them do so – but then again, maybe not…

..and al Jazeera English gives us their report on Gina Haspel, the nominee from Generalissimo Trump to head the CIA; as we know, being a Repug means never having to say you’re sorry, even when it’s demonstrably clear that that’s what you are (and again, how much bleeping actionable intelligence do you seriously think you’ll get when you water board somebody 83 times?)…

…and proud of making up facts, apparently? The Gropenfuhrer is not sane (NSFW)…

…and here is yet another example of Life in Donald J. Trump’s America (remind me never to visit North Versailles, PA)…

A police officer violently arrested a woman just for filming him while he kicked several young Black girls out of a movie theater pic.twitter.com/9bePPLDwNw


…and RIP Stephen Hawking (political stuff starts at about 1:30, such as Brexit and Trump’s climate agreement withdrawal – not an optimistic forecast I know, but one well-reasoned from one of mankind’s greatest minds...and in case you somehow still haven't seen it, "The Theory of Everything" is a great movie)…

...and here's another once-a-year song. 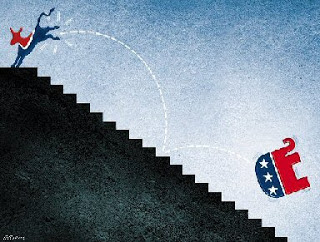 Yes, I agree of course that Conor Lamb’s showing was absolutely awesome last night (here), and I’m definitely in a celebratory mood, but I’m a little guarded because I have a feeling this may go to a recount…

…and by the way, GREAT works by students protesting across the country for sane gun laws also… 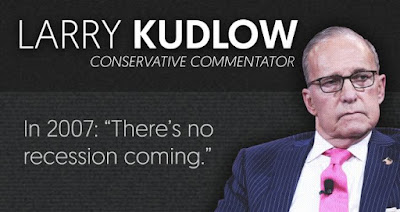 …and yeah, it figures that CNBC’s Larry Kudlow would end up as the latest “Trumpster” (here); in this clip from ‘09, he’s apparently trying to allege that that nasty Kenyan Muslim Socialist #44 was behind a report in which the hallowed U.S. Chamber of Commerce claimed that they supported climate change legislation, which of course they simply cannot do apparently – typical…

…and gosh, what a shame – men supporting Generalissimo Trump are having a hard time with the ladies; color me shocked – heh…

…and Cenk and Ana tell us about Uday Trump Jr. seemingly being interviewed by a chocolate bunny when campaigning for Rick Saccone in PA-18 (the Twitter comments about this were hilarious...but sorry, Ana; PA is a commonwealth, not a state, and yes, there is a difference)…

…and happy 85th birthday to Quincy Jones; if I’m looking for a good song he produced, I might as well try to single out a grain of sand on a beach, as it were, but I settled on this one. 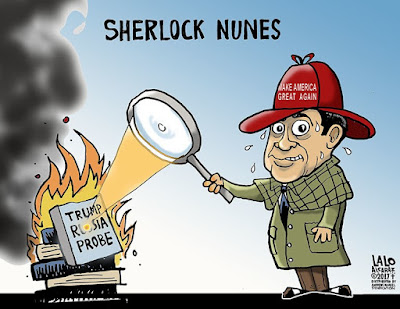 Rachel Maddow speaks with Adam Schiff, senior Dem on the U.S. House Intelligence Committee, on how Trump flunky Devin Nunes just ended the “investigation” into Russia’s collusion in our election in 2016 in probably as partisan a manner as you can imagine…

They dedicated their lives to serving our nation’s veterans.

These are their stories. pic.twitter.com/IZYlA2d8s9


...and speaking of AR-15s, if I could vote in Virginia's 2nd Congressional District election, I sure as hell would support Karen Mallard for this (and she turned the gun over to the cops, so what she did was OK; wrong again, trolls)...

This congressional candidate filmed herself destroying an AR-15. Now she's being trolled and accused of a felony. pic.twitter.com/KtbB5mK4Tr


…and good for Elizabeth Warren for going after Democrats who actually supported the most recent fraud banking legislation to emerge from the U.S. Senate (apparently, though, Bob Casey didn’t – nice work)…

…and for anyone in PA-18, it should be pointed out that Rick Saccone is an utter Koch-head (“this is an auction, not a democracy” – uh, yep – the legacy of Citizens United lives on)…

Update: One of these days, this diversion BS from these assclowns won't work any more - wouldn't it be awesome if that day was today?

…and speaking of today’s special election, here’s a tune to get motivated for Conor Lamb, as if we need that at this point (and by the way, happy belated 70th birthday to JT).

Posted by doomsy at 6:18 AM No comments: 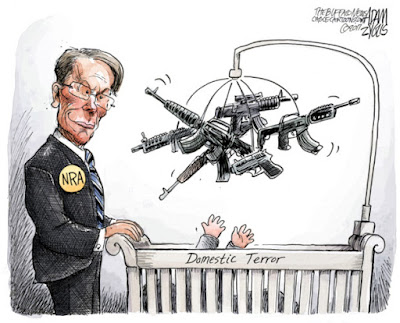 I mean, OF COURSE the NRA is suing to lift the age restriction on buying the weapon of mass slaughter that they want everyone to have (even though the bill doesn’t actually ban AR-15s, which it should, but the bill is progress of a sort, however minimal, but of course the ammo-sexuals won’t even allow that)…

The NRA is suing Florida to block the state's first gun law since the Parkland shooting pic.twitter.com/Phvb27eiSa

...and normally I wouldn't take pleasure in another's personal misfortune, but I'll make an exception for this scumbag...

…and it looks like Dem U.S. House Rep Sean Maloney of New York ended up going toe to toe with The Dragon Lady (of all the incompetent Trumpsters, I would say that Mrs. McConnell…and she LOVES to be called that, by the way…is the most angrily combative, something to consider in light of this and this - I hoped I would never have to post on this woman again, but we are where we are I know)...

The transportation secretary admitted that Trump is trying to kill one of America's top infrastructure projects pic.twitter.com/XJGi6TDNNc

…and my guess is that, if Stanley Kubrick had lived to make a sequel to “Eyes Wide Shut,” it might have looked like this.