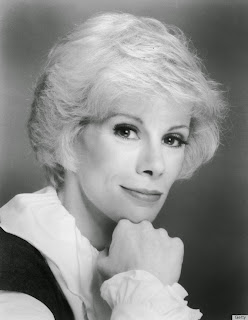 On the one hand, I was sorry to hear about the passing of Joan Rivers (here) because she mentored an entire generation of younger comedians on their way up in the business. She also made herself a career out of nothing except her own hard work as nearly as I can determine, to say nothing of holding a family together at the same time, particularly in the wake of her husband’s suicide. She also received the metaphorical “back of the hand” from Johnny Carson all because Rivers wanted to have her own show; if Carson had shown any class at that moment, he would have done all he could to encourage her (kind of like the way Linda Ronstadt did that for The Eagles when they were starting out - this should be noted also).

On the other hand, Rivers was also responsible for stuff like this; I don’t know if her moments of bilious hate increased as she aged and her health declined (which still doesn’t excuse those moments), but I think that should be remembered also.

Now back to the political stuff – I have to admit that the true scope of the awfulness of “Governor Ultrasound” wasn’t brought home to me until I saw this report from Rachel Maddow about Bob McDonnell’s conviction on 11 of 13 counts of corruption in office (here). Yes, the typical Republican “family values” hypocrisy is on display, but what does it tell you that he threw his wife under the proverbial bus during the trial too? He was also offered not too bad of a plea deal that he walked away from, and he’s now looking at significantly more jail time as a result…serves him right…

…and good luck to the striking fast-food workers mentioned in this report (more here); yeah, the whole argument about how raising the poverty minimum wage of $7.25 an hour will lead to another economic downtown is pretty much BS, as noted here – and for the typically disgusting corporate media perspective (from other dank quarters anyway), I give you this…

...and somewhat as a follow-up to the prior video, I know we already observed Labor Day a few days ago, but I couldn't let the week come to a close without this item (IMHO, a tragic reminder of how far we have to go in the battle against income inequality)...

...and I guess it's easy to forget how long these folks have been around on the "indie rock" scene cranking out good tunes - here's another one.

Joy Reid and NBC News’ Ayman Mohyeldin discuss what it will take to rebuild Gaza, someday (can’t imagine how many terrorists have been spawned as a result of Bibi’s temper tantrum)…

...and I'd be more amused by this ad parody here if it weren't for the fact that every stinking word of it is true...

...and yeah, for starters, this tells you a bit about Repug U.S. Senator Ron Freaking Johnson, people (in consideration of this, and let's not forget this too - first item)...

...and I don't really have a musical riposte to Johnson, but maybe in a way, this will suffice.

Posted by doomsy at 3:19 PM No comments:

I think Russell Brand gives us a “way forward,” if you will, on countering Fix Noise here (as an actor, I think he's a bit of an acquired taste, though he was really good in some parts of “Get Him To The Greek,” I thought)...

...and John Breaux always struck me as a “corpora-Dem,” but I'm not the least bit surprised by Trent Lott's involvement here; makes me recall this clip (and Lott apologized for the Strom Thurmond stuff, for the record, probably because he got caught)...

...and I would ask that you remember this the next time you come across something like this (I'll try to say more about the HuffPo piece later – by the way, referencing the Galloway clip towards the end, I should say that I'll never defend Hamas) ...

...and I'm glad to see Shawn Colvin talking about this – we all need to reach out if we have to.

Here is the latest installment of FAIR TV...

...and I thought this was a good commentary by Melissa Harris-Perry about trying to make a "teachable moment" out of the events surrounding the killing of Michael Brown in Ferguson, MO...

..and here's a real Labor Day story about workers at “Mahket Bahsket” going on strike on behalf of their CEO – yes, I'm serious...

...and I realize that this is a "perennial" for Labor Day, but why mess up a good thing?

Posted by doomsy at 7:59 AM No comments: