As of August 1, 2013, the Post Office will stop Saturday mail delivery – Sam Seder gives us the sordid history as to why (like just about all bad things in government, think Bushco…more here)…

…and here is a good Saturday night bar song (I think this loops into a playlist, just so you know). 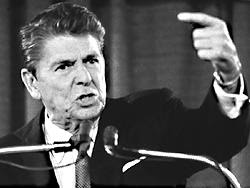 I don’t know how many other people besides your humble narrator were aware of this, but last Wednesday would have been the 102nd birthday of The Sainted Ronnie R.

How many other people, I mean, besides PA’s Governor Tom (“Space Cadet”) Corbett, who was one of 40 Repug governors signing a declaration here proclaiming February 6th as “Ronald Reagan Day.”

Which made me recall this speech that Number 40 once gave in PA, in which he said the following…


Our tax cuts in 1981 lifted our economy out of—you've heard the word back then-"malaise" and into an almost 2 1/2 years of growth. If those tax cuts could take a sick economy suffering from runaway inflation, skyrocketing interest rates, declining investments, sinking morale, and slumping initiative and turn it into the strongest, most dynamic and innovative economy in the world, think what America's tax plan can do today. We can build success on top of success. We can ignite the second stage of our booster rockets and blast this economy to new heights of achievement. We can do it, and we will do it.

Utterly (and typically) ridiculous hyperbole aside (also on display from Reagan here), the following should be recalled about President Jimmy Carter’s “malaise” speech from here (basically, after he gave it, his approval rating rose 11 points – and of course, he never even actually said the word “malaise” in the speech).

So that makes him at the very least “The Great Obfuscator” based on the excerpt (you could also argue that that makes him a goddamned liar, but I’ll leave that judgment to history).

Anyway, here is my point (at last)…as bad as Reagan was, he looks like FDR in comparison to the yokels in his party now, including Rand Paul in the U.S. Senate, who apparently has no trouble with our economy defaulting based on this.

Well, Reagan, for his myriad faults, actually had some words of wisdom on that subject…

…and I pointed out yesterday that Karl Rove is pitching a fit over the prospect of Steve King running for the Iowa U.S. Senate seat that will be vacated by Dem Tom Harkin.

Well, while you’re trying to wrap your head around that as they say, try this on for size: Al Franken versus Moon Unit Bachmann in Minnesota (here).

Update 2/9/13: In a way, this is actually positive - let her be a constant reminder that the U.S. House Repugs and their "leadership" learned absolutely nothing from the 2012 elections.

…and I was trying to find a video that mentioned Reagan, so I settled for this (don’t blink or you’ll miss it – a tune that has launched a thousand Google searches I’m sure…masterful and clever from the “Top Gun” era, and with a message).

Kudos to Sen. Bernie Sanders for trying, once again, to fight this country’s ridiculous income inequality…

If a certain George W. Bush were doing this, we in left Blogistan would be jumping up and down, and well we should be.

But it’s President Hopey Changey instead. And that makes it OK in no way, shape, or form.

Actually, it makes it worse because, as Ray McGovern points out in the clip, Obama should definitely know better (more here...this is a bit of positive news, though)…

…and Martin Bashir tells us that, when it comes to faith, this truly is a center-left country…


…no matter what kind of rebranding the Repugs attempt, as Jon Stewart notes here…

…and this absolutely has to be a Photoshop special – hope so anyway.

This happened ten years ago today…

…and why oh why is our beloved commonwealth trying over and over and over to play electoral political games (here – and yes, I know the answer…and Smerky represents people “in the middle”? Of what, I wonder…I’ll make it easy on the Repugs; you want to try this crap in all 50 states? Be my guest – love to see you guys start losing Texas and NEVER win it back again)…


…and RIP Reg Presley (and let’s hold off on the Austin Powers jokes, OK bay-bee??)

I don’t know about you, but I think this is pretty darned interesting; made me recall this clip (a bit of culture once more)…

…and this tells us about the eight Republican troglodytes STILL opposing the Violence Against Women Act (the fact that the bill would probably die anyway because of the Teahadists in the House is no excuse, by the way)…

…and how funny is this, by the way (and let’s never forget that, no matter what it is, as far as our corporate media is concerned, it’s always good news for Republicans…I know Admiral Joe is more of a “take the high road” kind of guy, which is admirable, but I wish he’d pointed out that the Repugs made their own Frankenstein monster here and now they’re trying to kill it…weak Dem messaging again - sigh)…

…and yeah, this is kind of a gimmicky video, but it’s for a good tune.

Out of the mouths of babes, as they say (here)…

…and I know this is old ground, but I love the commentary about the books in particular from Bill Maher…

…and I hope they went out and got permits before they shot this video, assuming it was filmed in PA (don’t know) – you need ‘em in our beloved commonwealth (for real...being tongue-in-cheek about the fireworks, I should add).