Another Profile In Cowardice 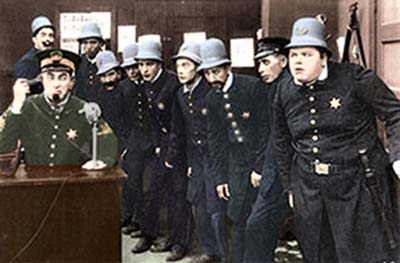 I read this story from James Risen of the New York Times today, and I simply could not believe my eyes.

It seems that the Democratic Party “leadership” in Congress has “a new willingness” to work with Dubya on expanding the wiretapping powers of our government, altering FISA law in the process.

(In the unlikely event that someone from the Democratic congressional leadership is actually reading this, please click this link to a prior post today that explains how domestic spying has been taken over by Repug corporate benefactors as a reward from the person taking up space in the Oval Office. This isn’t being driven by national security concerns, it’s being driven by money, as usual – or are you guys in on the scam also?).

This paragraph was particularly revolting…

Democrats appear to be worried that if they block such legislation, the White House will depict them as being weak on terrorism.

“We hope our Republican counterparts will work together with us to fix the problem, rather than try again to gain partisan political advantage at the expense of our national security,” Senator Harry Reid of Nevada, the majority leader, said in a statement Monday night.

Why the hell should any Democrat worry about how they are depicted by this White House? When are these people going to understand that their approval numbers are only going to go up the more they distance themselves from this crooked cabal?

By the way, this section appeared in the print version of this story, but for some reason, it was omitted in the online version (at least, I couldn't find it)…

Until recently, Democrats in Congress were reluctant to agree to changing the law, which was proposed by the White House in April. Democratic leaders said they did not want to amend it until the administration provided more information about how the security agency had secretly skirted the law earlier.

But the White House refused Congressional demands to turn over the secret legal opinions that had been used to justify the program of wiretapping without warrants, prompting the Senate Judiciary Committee to issue subpoenas to the administration in June.

Democrats now say they are willing to work with the White House on a narrow FISA bill.

So what happened to the subpoenas? Were they ever enforced? Why weren’t the supposed legal geniuses behind this program called to account before Congress (and I also wonder why this was omitted from the online version)?

The only good news I can glean from this (and I’m really trying hard) is that the Dems are fighting for the eavesdropping to be reviewed by a secret FISA court instead of the attorney general (if the Dems give in to letting Abu G. handle this, I will tear up my voter registration card and, in all likelihood, shut down this blog; that would pretty much kill any impulse I would have towards political activism).

And speaking of FISA, Ken Sanders of Democratic Underground provides the following here, including what I thought was a noteworthy excerpt…

Not surprisingly, as was recently reported by the Seattle Post-Intelligencer, in the FISA Court's first 22 years of existence, it didn't deny a single one of the government's 13,102 secret warrant applications. Only two were even modified. Since 2001, however, the FISA Court has modified 179 of the Bush administration's 5,645 warrant requests to spy on U.S. citizens. A total of 173 of those modifications occurred in 2003 and 2004. In that same two-year period, the FISA Court rejected or deferred at least six of the Bush administration's warrant requests.

While only little more 3 percent of the Bush administration's secret warrant requests were modified or denied by the FISA Court, the fact that any were modified or denied is telling. On 185 occasions, the FISA Court found that the Bush administration committed "clear error" in its conclusion that there was probable cause to believe that a U.S. citizen was communicating with enemies of the state.

No wonder the Bush administration finds FISA to be too cumbersome. It minimally checks Bush's otherwise unchecked authority.

Also, I wonder how much we’ve consulted with other countries who are (hopefully still) our allies in this matter (pertaining to the international calls routed through here)?

You lie down with dogs, you get up with fleas, Harry.

Update 8/2: I think Russ Feingold does the best he can with this situation here (per mcjoan at The Daily Kos).
Posted by doomsy at 11:53 AM