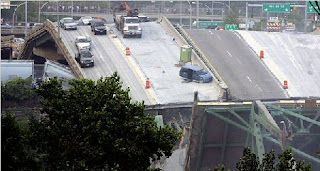 I’m trying to play catch-up a bit on the story that broke earlier this week of Repug U.S. House Reps. Phil English (Erie) and John Peterson (Pleasantville, Venango County) doing their best to fight the proposed tolls along Interstate 80 in Pennsylvania. The purpose of the tolls, backed by Gov. Ed Rendell, would be to fund bridge and highway improvements as well as mass transit.

(By the way, as noted here, I-80 was one of the roadways impacted by last February’s severe snow and ice storm, along with I-81 and primarily I-78. Is it too much of a stretch to imagine that money could be used to make those highways easier to access or exit in the event of another weather emergency of that type?).

The stupidity of this exercise by English and Peterson is matched only by the horrifically bad timing of their antics; the recent bridge tragedy in Minnesota (pictured) only underscores the importance of trying to repair the crumbling infrastructure in this country, particularly our highways.

“We are not going to stand idly by and watch Harrisburg politicians pick the pockets of western Pennsylvanians to prop up Philadelphia’s mass transit system.”

We just heart you so much too in these parts, Phil, you good buddy.

Well, as noted in this Inquirer story today (still reading online, sometimes against my better judgment)…

The state Senate's top Republican yesterday called two U.S. representatives from his party "obstructionists" for trying to stop a plan to add tolls on Interstate 80 and use the revenue to pay for bridge and highway improvements and help mass transit.

Sen. Joe Scarnati, the chamber's president pro tempore from Jefferson County, said in a statement that the money was badly needed to fix nearly 6,000 bridges that are structurally deficient and 9,000 miles of road in poor condition.

And he blamed U.S. Reps. Phil English and John Peterson for failing to secure enough federal transportation dollars for Pennsylvania.

Peterson contended that Pennsylvania already got one of the largest shares of federal transportation funding, and that tolls on I-80 would hurt local economies.

"I think that Mr. Scarnati would be well served to have visited with his companies" before he backed the toll legislation, Peterson said.

“His companies?” I would say that the opinion of “his constituents” would be to favor the tolls, particularly in light of the Minnesota tragedy, you fool. And how sad is it that both you and English were called out not by a Dem, but by the head of your own party?

As noted from this Source Watch link, it looks like English, along with Joe Pitts and former rep Jim Greenwood, is another Repug who broke a term-limit pledge, and Howie at Down With Tyranny comments on how bad English is here in typically understated fashion (smirk).

It looks like Dem Steven Porter is going to run against English for Congress again next year (here), and Porter has been making steady gains while English continues to ride the coattails of Repug incumbents (as we know, though, those “coattails” have been gradually shrinking). In the case of English, we’re not talking about a district inherently receptive to Dems, though English may have handed Porter a nice weapon by his latest blundering. We’ll see.