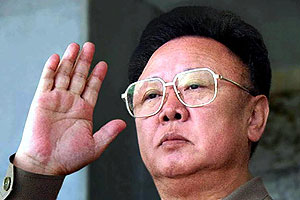 I guess I’m kind of in a foreign-policy-bad-guy vein today.

With the concern about Iran and the general chaos in that area of the world, the creeping influence of our former KGB buddy Vlad Putin in Russia over that country, the ascendancy of China along with our ballooning trade deficit, the new economic power of India, more war, famine and disease in sub Saharan Africa, and the previously mentioned economic ties being forged in South America and the Caribbean in response to the prevailing politics of insanity in this country, has it occurred to anyone else besides me that one trouble spot of a country has been strangely quiet recently? And does anyone care to take a guess at which one I’m talking about?

If you managed to avoid looking at the photo with this post and realized I was talking about North Korea, then let me know who you are and I’ll send you a free commemorative dartboard that contains all our favorite Repug villains (Fitzy, Weldon, and Gerlach are 20 points, Santorum, Trent Lott, Jim Inhofe and Jim Bunning are 40 apiece, Rummy and Cheney are 50, and Dubya is sitting right in the bullseye for 100 :-).

And the reason WHY things are quiet at the moment with that country is because they’re particularly POed at us and refuse to negotiate over their nuclear weapons.

This story appeared in the Philadelphia Inquirer a few weeks ago concerning Bushco’s efforts to break up a ring counterfeiting U.S. currency that is reputed to operate out of North Korea, with Deputy Secretary of State Robert Zoellick issuing this tough-guy quote:

"You've got an illegal regime that is living off of counterfeiting and narcotics and others," Zoellick told a House panel this month. "We have to protect our country. We can't allow people to counterfeit."

(By the way, you can read about more foreign policy fun with Bob Zoellick here.)

(Fighting the counterfeiting ring) has been a scattershot approach, not a pinpoint attack, and the collateral victims include a group of British bankers who set up a small private bank in North Korea 11 years ago to cater to merchants and importers.

"All of our customers are foreign or foreign-related in some way," said Nigel Cowie, general director of the Daedong Credit Bank. "Most of them are importing goods... food-related stuff like cooking oil and sugar."

"The only way we can top up the account is to physically take the cash from here," Cowie said in a telephone interview from Pyongyang.

That was what couriers were doing Feb. 21 for the Daedong Credit Bank. They were taking $1 million and 20 million Japanese yen (about $182,000) from Pyongyang to the Golomt Bank, an established bank in the Mongolian capital still willing to deal with a North Korean bank.

At the Ulan Bator airport, Mongolian agents seized the cash and detained the couriers, Cowie said. The next day, Mongolia alleged that $61,700 of the cash was believed to be counterfeit. It took 14 days before Mongolia said further examinations showed all the cash to be legitimate and let it go.

Cowie and fellow British bankers in Daedong boil at the U.S. sanctions, saying their bank employs a strict code of ethics and money-laundering rules.

"They are tarring everybody with the same brush, whether they're legal or illegal," Cowie said, adding that humanitarian and U.N. agencies also are finding it hard to move money in and out of Pyongyang.

Of course (as the article also goes on to mention), Bushco is just thrilled with the results.

"The Bush administration has been pleasantly surprised by the effect of the financial sanctions...they will be in place as long as the Bush administration is in office," predicted Peter M. Beck, the Seoul-based Northeast Asia project director for the International Crisis Group, which advocates for peaceful resolutions.

But Beck said that South Korea's government, a party to the nuclear talks, thinks the United States is showing it has "no appetite for further negotiations" on the nuclear issue by pressing ahead with the sanctions.

So, for the price of breaking up a counterfeiting ring, we put talks that could avert nuclear war in jeopardy and aggravate our allies who have a significant stake in the global financial services industry? And trust me when I tell you that there are some very sophisticated linkages there.

Maybe I’m missing something here, but the whole “risk-reward” part of this doesn’t make any sense, though it is in keeping with this administration’s past actions involving this country (and somewhere, I think “the little pygmy” is smiling over all of this).
Posted by doomsy at 2:30 PM