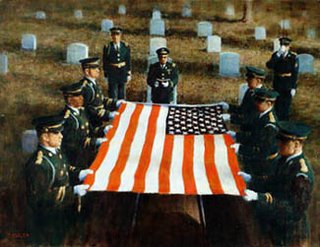 We now know that 2,500 brave men and women in our armed forces have died in Dubya’s illegal Iraq War, though, to White House Press Secretary Tony Snow, that is “only a number”.

And on the same day, we read this jaw-dropping note also from The Huffington Post about granting amnesty to terrorists who have killed our soldiers, reporting the words of Repug senators Ted Stevens, Mitch McConnell, Lamar Alexander, John Cornyn, and Saxby Chambliss.

Please allow me to point out that the only person in this bunch who has the right to say words that are this stupid is Ted Stevens since he at least served in the Air Force in World War II, though how he as a veteran could feel this way is something I’ll never understand.

McConnell, Alexander, Cornyn, and Chambliss, however, did not, and should immediately apologize.

I forgot to point out yesterday that it was Flag Day, and I’m sorry for that. However, given my disgust with these individuals who supposedly represent our government, maybe it’s just as well that I didn’t (and I know that sentiment contradicts an earlier post).
Posted by doomsy at 2:12 PM