Fuel From Fidel, Only At "CastroCo" 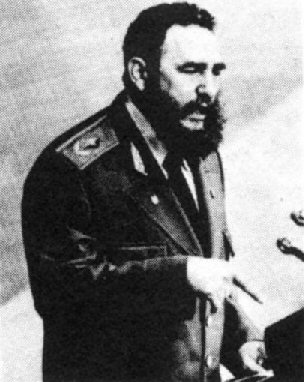 It’s so much fun to watch the slow disintegration of support propping up the Bush regime, part of which is noted here:

So, in this country’s ongoing quest to feed its oil dependency, it looks like we may have to go with our “hat in hand,” as it were, to Fidel Castro who, as noted here, has recently formed an alliance with Venezuelan President Hugo Chavez to sell oil throughout South America and the Caribbean.

I mean, it would merely be fun to watch all of this play out if it weren’t for the prospect of ever-higher gas prices because we’ve frozen ourselves out of this market for so long due to this country’s ridiculous embargo of Cuba (and I sincerely hope that Ileana Ros-Lehtinen and Mel Martinez are watching all of this slowly play out as well, and I’m sure they are).

I’m not trying to trivialize the fact that Castro is a mean, rotten guy, and one day he REALLY WILL be dead, though he may end up outliving still another president or two in the process. However, the way to ensure that a leader more sympathetic to our interests will follow him is to set up some kind of economic self interest once again as we had before Castro seized power, not continue in this ridiculous isolation that our “friends” such as China readily exploit by competing in Cuba’s market while we spitefully sit on the sidelines.

Update: And as long as we're discussing that area of the world, here's more from Take It Personally (good job to fix the headlines box).
Posted by doomsy at 12:15 PM