This "Pony" Knows No Other Tricks 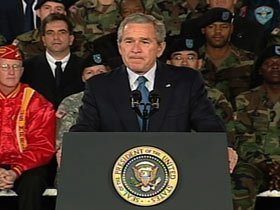 Today’s CNN Quick Vote question is “Do you think the Bush Administration manipulated the prewar intelligence on Iraq?”

I could exhaustively refute his speech, but I and better lefty bloggers have already done that at various times and places.

Another thing (1): I know Dubya isn't going to answer this, so I'm putting it up here for review anyway.

Another thing (2): Atrios lists a chronology of lies from Bush on this, including his supposed desire for a peaceful end to this before invading after Congress had already approved the resolution to use "force." Even though our elected representatives (like many other people) were letting their "lizard brains" run wild, as it were after 9/11 (re: fear and paranoia replacing actual thought) and not doing their jobs, Bushco fed that and capitalized on it, leading to this current mess. Anyone thinking rationally would wonder why a president would ask for a resolution to "use force" (meaning what, exactly? Air strikes? "Full invasion" should have been stated in the declaration.), receive it, and then say he was still seeking a peaceful solution. Were we "going in" or weren't we? (and of course, we were come hell or high water as it turned out).

(The "Real Time" update is coming, I promise...lots of nutsiness at the moment and also a lot of nonsense to refute from Joe Scarborough.)

Update 11/13: Sounds like Dubya has some work to do on this whole "Support Our Troops" thing of his.
Posted by doomsy at 10:03 AM

Article calls for Law Society to issue Blogging guidelines
This weeks Law Society Gazette has a short article on UK Lawyers and blogging by Rupert White.
Find out how to buy and sell anything, like things related to road construction safety equipment on interest free credit and pay back whenever you want! Exchange FREE ads on any topic, like road construction safety equipment!

Diamyd Provides Update on Negotiations to Acquire American Biotechnology Company
Business Blogs - RSS Feeds - Business Case Studies Diamyd Medical AB announced that it is making considerable progress in the negotiations to acquire a small American biotechnology company.
Find out how to buy and sell anything, like things related to road construction safety equipment on interest free credit and pay back whenever you want! Exchange FREE ads on any topic, like road construction safety equipment!

Cronenberg rings in new HBO series
Business Blogs - RSS Feeds - Business Case Studies TV News: HBO dials 'Ringers' from 'Violence' helmer -- "A History of Violence" helmer David Cronenberg is teaming with HBO on a series adaptation of his 1988 ...
Find out how to buy and sell anything, like things related to road construction of pa on interest free credit and pay back whenever you want! Exchange FREE ads on any topic, like road construction of pa!

If it means anything... I heard, from someone who attended, that he was surprised at how few Tobyhanna Army Depot employees attended, and that there were a lot of empty seats at the gathering.
(I live about 20 miles from Tobyhanna, PA.)

Yes, I suppose everything looks perfect for someone living in an ivory tower, and it's difficult (impossible?) in a situation like that to look objectively at yourself and understand why others don't feel the way you do. Still, though, Dubya never even bothers to make the effort.

Also, I love how the newspaper headlines are proclaiming that "Bush Attacks His Critics" by making the same speech, with minor variations, that he has made at least half a dozen times before.

Speaking of national security, I like your "Terror Alert" level today (I'm partial to Cookie Monster myself).