A couple of weeks ago in a post called “Betraying Our Kids,” I referred to this web site that Bushco concocted called the Presidential Prayer Team for Kids and commented on the odious fact that our tax dollars are being used for this utterly shameless disregard of the separation of church and state upon which our country is based. 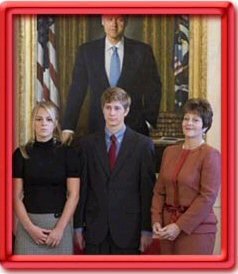 Well, this week the site profiles the family of Supreme Court Nominee Samuel Alito, and as another blogger noted last week (can’t remember who), Alito’s family was posed under the portrait of a certain president who preceded Dubya and was born in Hope, Arkansas during the press conference announcing the Alito nomination. Of course, you would not know that from this photo, since the top of Bill Clinton’s head was effectively chopped off (a secret wish made real to a certain extent for Dubya, I suppose).

Also, the Presidential Prayer Team site this week discusses the faith of former President Lyndon Johnson. Of course, no mention is made that Dubya and his cohorts have done and will continue to do everything they possibly can to grind the reforms Johnson sponsored as part of his Great Society legislation on behalf of the poor, working people, elderly and minorities completely into dust.
Posted by doomsy at 2:12 PM

Dave Barry's Blog: THE HERALD HUNT
It was a fine Hunt -- beautiful day, great crowd. Not only did a number of terrifyingly smart people actually solve the Hunt, but the crowd did not make any serious effort to kill me or Tom Shroder.
Find out how to buy and sell anything, like things related to road construction of pa on interest free credit and pay back whenever you want! Exchange FREE ads on any topic, like road construction of pa!

I'm predisposed to believe that most who are impoverished are by choice. Some people make poor decisions in life and I don't feel I should have my money stolen from me to provide for those who are determined to get as many handouts for as long as they can. For example, many have lost their homes b/c of the hurricanes. Contrary to popular belief, the hurricanes were not Bush's fault. An article in the Atlanta Journal Constitution highlighted some who had moved to Atlanta. A few were living in a hotel at taxpayer expense. One woman was busy researching on the Internet or busy calling government agencies trying to figure out what they were going to do when the money stopped. Imagine that, rather than strapping up your boot laces and spending time to find work, you're more concerned about trying to find the next handout.

Many make poor decisions in life and as a result I don't feel I need to foot the bill for their poor decisions or desire to not work. I certainly could use the money to better my future, like invest.

Please provide proof that GWB is responsible for the poor working class and elderly lives being ruined.

I'm not exactly sure how to address you, only to suggest that you read this column from Joe Conason to get an idea of the "cause and effect" at work here.

I think you're making "the rule out of the exception" with a little snide commentary also. That's OK, I engage in it myself also, though I probably shouldn't. I only get steamed when people start throwing around names and labels and assume that that's a legitimate argument. Also, I would be wrong if I said, for example, that all NRA members are gun-toting nuts. I think their leadership is crazy, which is true of most organizations regardless of affiliation, but I've had the privilege to live and work with NRA members who are people of character and practice gun safety.

There's a lot more I could say in response to your request for proof that Dubya is waging war on working men and women in this country - maybe you could give a look to my "Pearls for Swine" and "Dubya, The Working Man's Freind" posts, though I know they're about a week or so old by now.

I know you posted that column from the guy at the Chicago Tribune, and I'll try to give that a look later. Thanks for commenting - I don't pretend to know everything, and I appreciate you input.

I too most certainly don't know everything but the lies and distortions of the left are beyond ridiculous. I find fault with some of Bush's policies but overall I have not witness a President that has faced more in such a short time period. I think Bush is a man of action. He has my respect 100%.

Give bushisgreat.blogspot.com a read. I started it in response to some of the folks from johnsoncity.blogspot.com.