Once more unto the breach, dear friends... 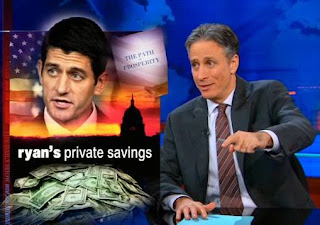 …and that brings us to #6 on our list of U.S. House Repugs opposed to health care reform, and that would be none other than the man of the hour, Willard Mitt Romney’s VP nominee himself, Paul Ryan of Wisconsin.

As I work my way down this list, I feel my level of disgust rising more and more with each of these fools and frauds, and though it may rise higher still before I’m all done with this, I must tell you that it’s pretty damn elevated at this moment. And that’s because, like no other politician with the possible exception of John McCain, Puppy-Dog-Eyes Ryan has the Beltway media-political establishment utterly cowed.

It doesn’t matter how many times Ryan’s supposedly bold and visionary economic proposals are blown up by actual economists performing actual math showing the actual, real-world misery that would result if Ryan’s horrendous scheme were ever signed into law, under the guise of supposed deficit reduction (which, as is just about always the case with this bunch, would in fact make the deficit worse). And it just doesn’t matter how many times Ryan, among others, spouts the utterly craven lie that he, in fact, is the supposed protector of Medicare, as opposed to that mean, nasty President Obama who supposedly wants to destroy it.

And it also just doesn’t matter how many times it is pointed out that what Ryan proposes goes so completely against what he is supposed to represent as a Roman Catholic (his alleged religious affiliation) that it makes a sick mockery of that faith. Short of a charge of criminal activity resulting in prosecution in a court of law (and I don’t believe that will ever happen, if for no other reason because Ryan wouldn’t be where he is unless he were a smart and cagey individual, and I don’t see him doing anything like that), we are going to keep hearing the same mythology from our corporate media that we’ve been hearing from Ryan from now into the distant future.

So, with all of this in mind, I give you the following:


The selection of Paul Ryan for Willard Mitt Romney’s VP candidate is the perhaps inevitable result of the “magical” thinking of that party in collusion with our Beltway media political complex, where facts are impervious to the bubble of pseudo-reality in which they surround themselves. And as far as I’m concerned, that makes it the sworn duty of every American voter to rupture that bubble beyond any possible repair in November...

...and when I think of Ryan (which I try not to do, actually), this song somehow comes to mind.