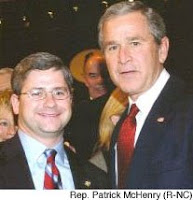 …and that brings us to #11 on our list of U.S. House Repugs opposed to health care reform, and that would be Patrick McHenry of North Carolina.


I’m not sure what is worse about McHenry – the fact that he called Elizabeth Warren, now running against Scott Brown in Massachusetts for the latter’s Senate seat (and on that subject, what Atrios sez here), a liar when she appeared at an oversight hearing (here), or the fact that McHenry pulled the same crap with Phil Angelides of the FCIC (here). And given that, is this really a surprise?


It was also McHenry’s idea to try and get a movement going on behalf of The Sainted Ronnie R to get his face on the $50 bill (here).

Also, McHenry is apparently closeted. I honestly don’t care about that – I would only say that, if that is true, then he shouldn’t align himself with a political party that has made it its mission to Hate Teh Gay (and the following clip speaks volumes to me about the type of person McHenry is, though he apologized, as well he should...if you're fed up with McHenry and his antics, click here.)…

…and Russia “is our number one adversary,” Willard Mitt? Of a “geopolitical nature,” whatever the hell that means? Really?...


…and this might be my favorite tune of the year so far.