Tomorrow, there will be a gathering of Bucks County, PA Democrats at the Doylestown office for canvassing, phone banking and voter registration (10 E. Court Street) at 10 AM. You can also sign a birthday card for President Obama. With that in mind, I give you the following video from Kathy Boockvar, running against Mikey the Beloved for his PA-08 U.S. House seat (lots of ammo to use against Mikey…this is good, though - to help, click here)...

…and I’m not going to be able to add Anne Marie Buerkle to the list of Mikey’s pals trying to overturn health care reform (and not to worry – Mikey is on the list), but I thought she deserved a mention anyway (one of the “flat-earth five” opposing the environment, and don’t get started on her and abortion – the Log Cabin Republicans actually gave Buerkle an award; that group defines Stockholm Syndrome as far as I’m concerned…I’m mentioning Buerkle because she was in that video yesterday from Rachel Maddow about that nitwit Mike Kelly…links are here, here and here)… 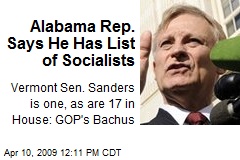 …and that brings us to #12, Spencer Bachus, who spent over $250 grand of campaign funds on lawyers (here – and how exactly is that legal?), probably because of this.

Oh, but it’s really all the fault of that baaad “Democrat” Party, isn’t it, you weasel (here)?

Want more evidence? As noted here, Bachus also came to the aid of Edward DeMarco of the Federal Housing and Finance Agency, who decided that Fannie Mae and Freddie Mac shouldn’t offer debt forgiveness to borrowers, despite pleas from the Obama Administration and congressional Democrats (more “ROI” for the “pay no price, bear no burden” bunch from Bachus…Professor Krugman had a good column on the odious Mr. DeMarco here).

And in case you had any doubt about Bachus and health care reform, I give you this (and I’m not sure if truer words were ever spoken by Cenk Uygur here particularly at the end)…


…and I apologize for neglecting to mention until now the recent passing of Philadelphia radio legend Joe “Butterball” Tamburro (here) – I offer the following as a tribute.