Here’s more on Paul Ryan, Willard Mitt Romney’s VP nominee, and his “funny number” creation (Or maybe the top of the ticket instead, as noted here? Unbelievable…for more, click here)…

…but even though the supposed GOP financial “architect” will come a bit later on the list, for now, we’re going to journey to “the land of the yellow rose”… 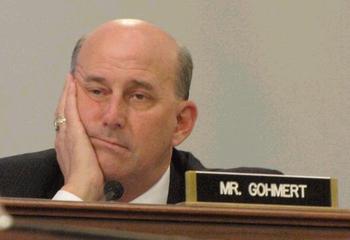 ...and that means it’s time for #7 on our list of U.S. House Repugs opposed to health care reform, and that would be Louie Gohmert of Texas (by the way, I should warn that there may be bad words on some of the pages I link to here – I don’t usually say anything about that since I believe that other people’s content isn’t my problem, but others, to their credit, have also pointed out this stuff about Gohmert, and his particular type of confrontational wingnuttery has, not surprisingly, generated some rather strong feeling).

I’m not sure where to begin, so I might as well just pick a spot and get going:

I’ll tell you what – since a picture is worth a thousand words (last I checked), I’ll just “go to the tape”; here, Rachel Maddow and Kent Jones introduce us to “Gohmert” Pyle (someone else came up with that, not me)…

…and in case anyone has any doubt as to whether or not Gohmert should be on this list concerning health care reform, I give you this (I’m sure I’ll put this video up again before this list is complete - more here)…

…and here’s a tongue-in-cheek song for Gohmert, who probably will think it’s a documentary (sorry, no video).